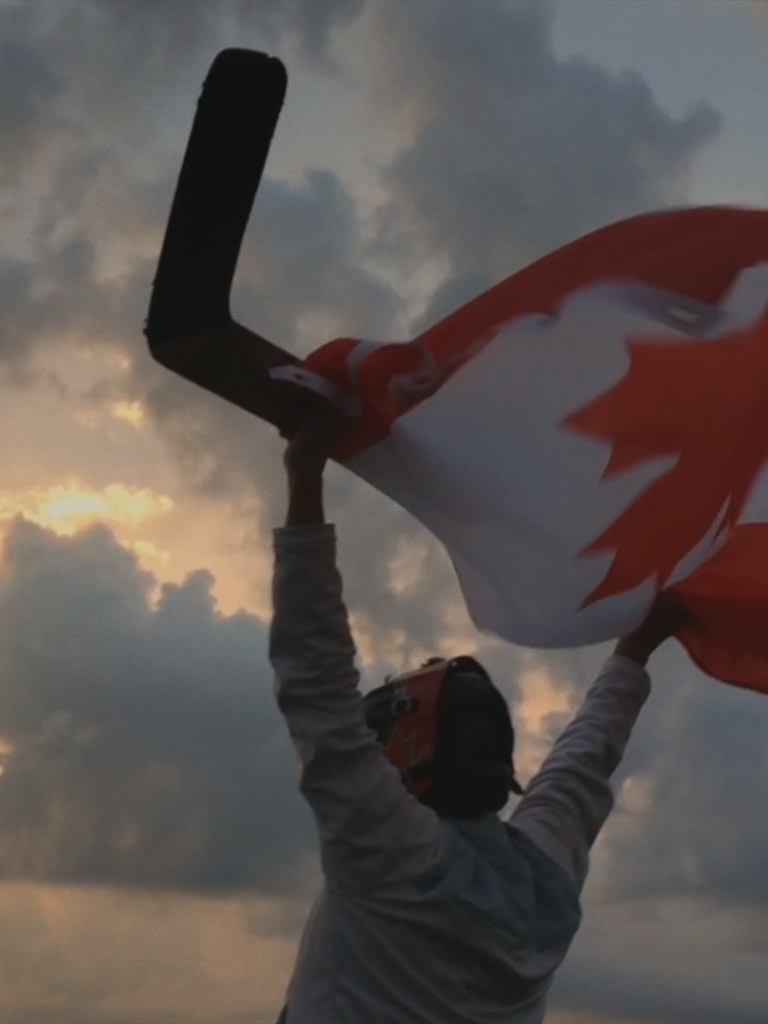 – Bell Media announces full broadcast plan for two-hour television event to premiere in advance of the 150th anniversary of Confederation on July 1 –
– CANADA IN A DAY is the culmination of more than 16,000 video submissions from Canadians across the country and around the world, shot entirely by Canadians over the course of 24 hours on September 10, 2016 –
– Crowd-sourced film includes footage from more than 10,000 Canadians from all ten provinces, three territories, 22 countries, and in 18 languages including Punjabi, Tagalog, and Indigenous languages Ojibway, Squamish, Mohawk, Mi’kmaq, Cree, and Inuktitut –
– Esteemed filmmaker Ridley Scott among executive producers of CTV’s CANADA IN A DAY, which was inspired by Scott’s award-winning feature film Life In A Day –

BANFF, AB (June 13, 2017) – O Canada! CTV today proudly announced from the Banff World Media Festival the full broadcast plan for its all-new crowd-sourced project CANADA IN A DAY, which premieres Sunday, June 25 at 8 p.m. ET/PT on CTV, CTV Two, and CTV GO, days before Canada celebrates the 150th anniversary of confederation on July 1, 2017. Following the broadcast premiere, the powerful, extraordinarily candid, and moving two-hour film directed by award-winning filmmaker Trish Dolman becomes available to viewers on CraveTV, beginning Friday, June 30. On Saturday, Sept. 10, 2016, Canadians from across the country and around the world turned the camera on themselves, filming moments of their lives – from the entertaining and everyday, to the poignant and contemplative. The film chronicles a single day in 21st century life across Canada, crafted for Canadians by Canadians. Offering remarkable insight into the lives, loves, fears, and hopes of a diverse cross section of Canadians from coast-to-coast-to-coast and beyond, the special event receives encore broadcasts on Canada Day, Saturday, July 1 at 9 p.m. ET on CTV and 3 p.m. ET on CTV Two; and on Sunday, July 2 at 2 p.m. ET on CTV.

** Media Note ** – Download photography for CANADA IN A DAY at BellMediaPR.ca

Contemplative and emotional, CANADA IN A DAY features a mosaic of cultures and experiences, with Canada’s varied landscapes – mountains, prairies, urban centres, rural settings, and coastlines – as the film’s backdrop. Clips were uploaded from countless beautiful locations such as Richmond, B.C., the Dezadeash River in Yukon Territory, and Newfoundland and Labrador, and from as far away as Ethiopia, Egypt, and Kuwait. A snapshot of Canadian life over a 24-hour time frame, CANADA IN A DAY’s autobiographical narrative candidly depicts a sun-up-to-sun-down chronology of a day in the life of Canadians: from everyday experiences and momentous milestones, to hardships and human rights issues, including poverty, mental health, and Canada’s healthcare system. The film offers a diversity of voices and moments that echo the country’s vast geography, while highlighting the commonalities that define “Canadian culture”. “The epic outpouring of submissions from Canadians eager to tell their stories and be part of this milestone project is symbolic of the country itself,” said Mike Cosentino, Senior Vice-President, Content and Programming, Bell Media. “CTV is proud to unite Canadians from across the country in celebration of Canada 150 with this historic special.” “Thank you Canada! The volume of submissions was overwhelming, illustrating the modern face of Canada for the 150th anniversary of Confederation,” said Trish Dolman, Director, CANADA IN A DAY. "I am very happy to see Canada become yet another nation this wonderful series will explore," said Ridley Scott, Scott Free Films and Executive Producer, CANADA IN A DAY. Ordinary and extraordinary raw footage featured in CANADA IN A DAY varies from the zombie apocalypse (Zombiewalk) in Vancouver and an anti-gay protest in Toronto, to white-water rafting in Kawartha Lakes, Ont., and a breathtaking flyby from the Canadian military’s iconic Snowbirds in Moosejaw. Compared to similar “In A Day” projects from around the world, including the highly successful Britain In A Day, Japan In A Day, and most recently India In A Day, Canadians have been some of the most enthusiastic supporters of the endeavor in the world. The crowd-sourced project received more than 16,000 video submissions – equivalent to almost 13 days of footage – uploaded to CanadaInADay.ca, from all 10 provinces, three territories, and from 22 countries where Canadians are living or were visiting on film day (Sept. 10, 2016). By the numbers, CTV’s CANADA IN A DAY lands third place for most videos received overall per capita, with 4.769 videos received per 10,000 of the population, just behind Spain with 4.839 (#2) and Italy with 7.521 (#1). CANADA IN A DAY By The Numbers and Fun Facts: Sept. 10, 2016 – CANADA IN A DAY Film Day 16,818 – Total number of videos received 1,861 – Total number of family-related videos received – making it the #1 subject matter for Canadians in terms of video uploads 13 – Total number of days it would take to watch all videos consecutively 2:01:58 – Longest running video received at a file size of 37.5 GB 1:11 – Average duration of videos at an average file size of 131 MB 301 – Total number of wedding videos received 283 – Total number of birthday and hockey videos received 100 – Total number of military-related videos received 34 – Rainbows captured on film day 22 – Total number of countries outside of Canada videos were uploaded from including the U.S. with 45 videos uploaded, France (22), U.K. (19), Mexico (13), and Kuwait (7). Other countries include as far wide as Ethiopia, Thailand, Spain, Egypt, Lithuania, and Pakistan. Half were from Canadians living abroad and half from those visiting other countries on film day (Sept. 10, 2016) 7 – Video submissions received with American Sign Language 4 – Total number of birth videos (2) and engagement videos (2) received 1 – First date and breakup videos received English was by far the prominent language featured in most videos, followed by French with 234 videos. Other languages include Spanish (38), Cantonese, Mandarin and other Chinese dialects (30), Tagalog (18), Punjabi (13), Italian (11), Persian (4), Tibetan (4), Kurdish (2), and dozens in Creole, across different dialects. First Nations languages include Ojibway, Squamish, Mohawk, Mi’kmaq, Cree, and Inuktitut. Canadians love their family, food, and furry animals. Below is a Top 10 list of most-popular tags for videos received: CANADA IN A DAY is inspired by the original award-winning Kevin Macdonald film Life in a Day which was Executive Produced by Ridley Scott. Shot in 2010 and released in 2011, Life in a Day was the remarkable story of one day on Earth. The project garnered more than 80,000 submissions from around the world, and contained footage selected from more than 4,500 hours of deeply personal, powerful moments shot by contributors from Australia to Zambia – from the heart of bustling major cities to some of the most remote places on Earth. Since then, several countries have launched their own In a Day films, including Britain, Italy, Germany, Spain, India, and Japan. CANADA IN A DAY sponsors are: Ancestry.ca, Dairy Farmers of Canada, and The Royal Canadian Mint. The film’s three partners will feature custom CANADA IN A DAY-inspired content celebrating Canada’s 150th anniversary. Canada in a Day is a Screen Siren Pictures production in association with Scott Free, produced and developed in association with Bell Media, with the financial participation of the Canada Media Fund, Bell Fund, Shaw Rocket Fund, Creative BC, FIBC, and the Government of Canada. Executive producers are Scott Free Films (Ridley Scott, Carlo Dusi, and Jack Arbuthnott); Trish Dolman, and Christine Haebler, with Trish Dolman producing and Tex Antonucci and Michael Ghent co-producing for Screen Siren Pictures Inc. Switch United is the web producer and Innovate by Day is the Social Media producer. For Bell Media, Danielle Pearson is Manager, Factual and Reality, Independent Production; Robin Johnston is Director, Factual and Reality, Independent Production; and Corrie Coe is Senior Vice-President, Independent Production. Pat DiVittorio is Vice-President, CTV and Specialty Programming. Mike Cosentino is Senior Vice-President, Content and Programming, Bell Media. Randy Lennox is President, Bell Media.

Established in 1997, Screen Siren Pictures is a leading independent film, television and digital media production company based in Vancouver, BC. We create innovative, award-winning feature films, documentaries and television. With a focus on international co-productions and partnerships, we bring creative energy and established local and international industry relationships to all projects.

President and founder Trish Dolman has been working in film and television for more than twenty years as an award-winning producer and a documentary director. In April of 2009 she joined forces with feature film veteran Christine Haebler as a producing partner. Known for excellence in production quality and fiscal management, Screen Siren has more than twenty productions to its credit and has produced for leading broadcasters around the world with completed titles premiering and winning awards at the major film festivals. Notable titles include Hector and the Search for Happiness starring Simon Pegg, Rosamund Pike, Toni Collette, Jean Reno and Christopher Plummer, as well as recent documentaries such as Eco-Pirate: The Story of Paul Watson.

Bell Media has commissioned some of Canada’s most-watched and most-acclaimed original programming, working with the best Canadian independent producers in the country. Hit series commissioned by CTV include ratings success stories SAVING HOPE, the record-breaking THE AMAZING RACE CANADA, MASTERCHEF CANADA, hit drama CARDINAL, and upcoming original series THE DISAPPEARANCE, THE INDIAN DETECTIVE, and THE DETAIL. Among the original series on Bell Media specialty and streaming platforms are Space’s internationally acclaimed ORPHAN BLACK as well as KILLJOYS, WYNONNA EARP, and DARK MATTER; Bravo’s award-winning and most-watched original drama 19-2; CraveTV hit comedy LETTERKENNY; Discovery’s first-ever drama FRONTIER; Comedy’s satirical news series THE BEAVERTON, CORNER GAS ANIMATED; and multiple series and specials for food and lifestyle channel Gusto, including ONE WORLD KITCHEN and A IS FOR APPLE. Discovery is also home to Bell Media’s hit factual franchise HIGHWAY THRU HELL, COLD WATER COWBOYS, and CANADA’S WORST DRIVER, among others. Bell Media is one of the first media companies in North America to commit to producing all new original scripted series in 4K.

Final Presenters Added to THE 2017 IHEARTRADIO MUCH MUSIC VIDE...