Earlier today, SHOWTIME® released the official poster and a new tease for the highly anticipated new season of BILLIONS, premiering on Crave on Sunday, March 17 at 9 p.m. ET. 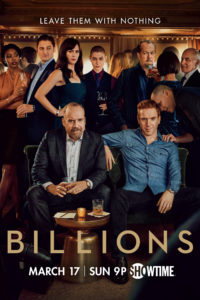 Fans and some of the BILLIONS cast couldn’t contain their excitement about today’s reveal:

Reminder: Canadians can catch-up on Seasons 1-3 of BILLIONS on Crave now. Season 4 sees former enemies Bobby Axelrod (Emmy® and Golden Globe® winner Damian Lewis) and Chuck Rhoades (Emmy and Golden Globe winner Paul Giamatti), and Wendy Rhoades (Maggie Siff), the chief counsellor to each, come together to form an uneasy but highly effective alliance aimed at the eradication of all their rivals. Ambition and betrayal have long been at the heart of BILLIONS, and this season, all the characters find out exactly how high a price they’ll have to pay.