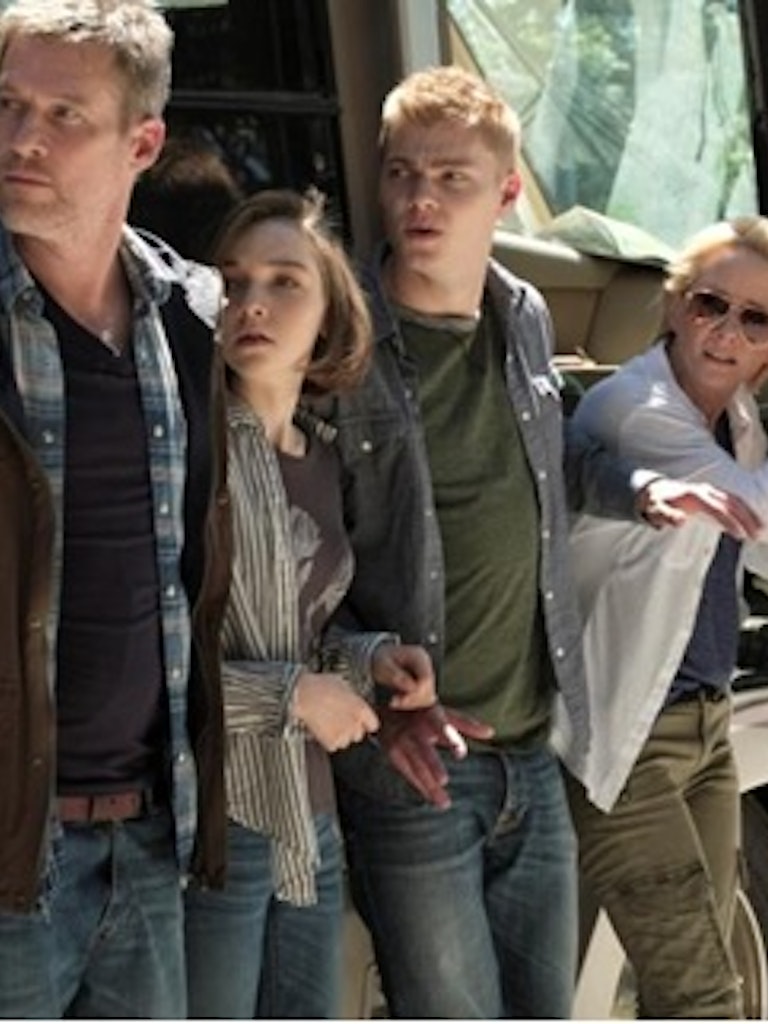 TORONTO (September 16, 2016) – This month, the end of the world is just the beginning with the debut of the Canadian action thriller AFTERMATH, premiering Tuesday, Sept. 27 at 10 p.m. ET on Space. Starring real-life couple, James Tupper (Revenge, Men In Trees) and Anne Heche (Hung, Men In Trees) as Joshua and Karen Copeland, the one-hour, 13-episode series follows their family’s struggle through a possible Armageddon. Shot in Vancouver, AFTERMATH is created by William Laurin and Glenn Davis, and produced by Halfire Entertainment in association with Space and Syfy. In AFTERMATH, Joshua Copeland (Tupper) is a university professor whose study of world cultures and beliefs gives him unique abilities to decode the end times and help his family to survive. Karen Copeland (Heche) is a fierce protector of her family, drawing on the combat skills and survival training she received as an Air Force pilot to keep her husband and children safe. In the premiere episode, “RVL 6768” (Tuesday, Sept. 27 at 10 p.m. ET), faced with natural disasters, supernatural creatures, and a horrifying plague, the Copeland family fights to survive the end of the world. AFTERMATH also stars Levi Meaden (The Killing, Olympus) as the Copeland’s eldest son, Matt. As a student, Matt was a fierce athlete whose physical prowess becomes an attribute as the family faces the end of the world, until the brutality of what he must do to survive begins to push his character into the darkness. Taylor Hickson (Deadpool) and Julia Sarah Stone (The Killing, Falling Skies) star as his twin sisters Brianna and Dana Copeland. Brianna is the outlier of the family who’s an emotional, romantic, and rebellious young woman anxious to live her own life, until the shocks and tragedies of the end of times put her on a new path. Dana is nothing like her fraternal twin – she’s practical, sardonic, and quick-witted with a keen analytical mind and a thorough knowledge of science. AFTERMATH creators/showrunners are William Laurin and Glenn Davis (Missing, Power Play, John Woo’s Once a Thief). Jason Stone (This is the End, The Calling), directs the first two episodes. Laurin and Davis executive produce along with Craig Merritt. Suzanne Berger and Connie Dolphin also produce. In addition to his lead role on the series, James Tupper is also co-producer. Jason Stone is consulting producer.

About Halfire Entertainment
Halfire Entertainment was founded in 2013 by seasoned TV executive Noreen Halpern to develop, produce, and finance television series and miniseries for the Canadian, U.S., and international marketplace.  The company produces exceptionally creative and commercial programming and employs non-traditional financing resulting in straight-to-series orders. Halfire produced AFTERMATH for Space and Syfy and is in production on the Sarah Polley-penned six-part mini-series ALIAS GRACE for CBC and Netflix. Halfire has a robust development slate with projects set up at Showtime, ABC, NBC, CBC, Bell Media, and Corus. Halfire’s WORKING THE ENGELS, starring Andrea Martin for NBC and Shaw, marked the first time a prime time comedy had been co-produced by U.S. and Canadian broadcasters.

About Space
Space is home to phenomenal programming including imaginative dramas, epic movies, engaging reality series, and the daily entertainment talk show INNERSPACE, the source for all-things genre, and the popular after show AFTER THE BLACK. Named “Channel of the Year” in 2013 by Playback Magazine, Space is also home to original series ORPHAN BLACK and KILLJOYS, and the exclusive Canadian home for signature series DOCTOR WHO, THE EXPANSE, DARK MATTER, and the upcoming AFTERMATH. Space content is always available at Space.ca, and on Facebook, @SpaceChannel, and other social media platforms. Space is part of Bell Media, which is owned by BCE Inc. (TSX, NYSE: BCE), Canada’s largest communications company.

The Rolling Stones’ Historic Film Goes to CraveTV In First-Wi...