Go To The News Page
88 kilometres. That’s how far 16-year-old Maya Farrell was from achieving her ultimate life goal last summer when she faced her personal mission to swim across Lake Ontario at it widest point. She knew it would require giving every last ounce of strength to reach the finish line. Farrell’s daunting objective is now chronicled in THE IMPOSSIBLE SWIM (Wednesday, February 27 at 7:30 P.M. ET on TSN), the third episode of the all-new season of TSN’s award-winning series ENGRAVED ON A NATION. Two years earlier, at just 14 years old, Farrell set out to be the youngest swimmer to ever achieve the feat. After 24 hours of swimming, she was a mere 300 metres away from shore when a storm forced her team to pull her from the water – a devasting outcome for the young athlete. The swim across Lake Ontario has been accomplished before – including by both Farrell’s mentor Marilyn Bell and her coach Vicki Keith. With personal heartbreak in Farrell’s past and 88 kilometres standing in the way of her ultimate goal, THE IMPOSSIBLE SWIM is an epic tale of sporting determination. @TSN_PR dives into THE IMPOSSIBLE SWIM, speaking with directors and writers Larry Weinstein and Ali Weinstein, as well as Farrell herself, as they share their perspectives on the making of the film. Maya Farrell on Marilyn Bell and Vicki Keith: 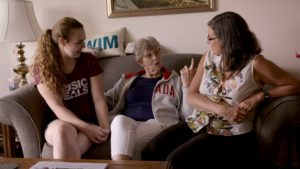 “I had met Marilyn once before this crossing attempt. It was an incredible experience to meet her as she is a superstar in our sport. When my grandfather told me I should try to swim across Lake Ontario, he told me about Marilyn Bell, so to then be in a film with her was just amazing. She has been so interested in my swimming, and it’s been great to have her support all along the way. I really appreciated that she called me during my 2018 crossing attempt. To be swimming across Lake Ontario and have Marilyn Bell call you is a pretty cool experience!” “I have enormous respect for Vicki and what she has achieved in our sport, so it’s amazing to be able to work with her. I remember being at swim meets when I was 10 years old and seeing her there and being in awe of her, so I still can’t really believe she is my coach. She really understands what it’s like to be in the water because she has done so much. I like that she values my opinions about my swimming and training. She is also flexible and understands I also have to dedicate time to my schoolwork and music. Vicki has become a good friend too and someone who I can talk to about all aspects of my life.” Director/writer Larry Weinstein on making THE IMPOSSIBLE SWIM: 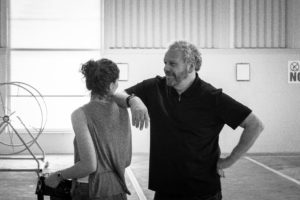 “I have found that being a part of this film has been both incredibly inspiring but also incredibly moving. THE IMPOSSIBLE SWIM is a story that is at once extremely intimate and also powerfully universal. It’s about the extremes of human effort and the longing we all have to achieve goals that seem unachievable. It’s about dreaming the impossible dream and trying to make it a reality. Everyone who worked on the film felt emotionally invested, and I believe it shows in the way it was filmed, edited, and directed.” “As a story about generations of swimmers but also about parents and their children, it had another special significance to me: I got to work with my daughter Ali, who is also a filmmaker. This was the first time we actually worked together on a production, and I feel that our collaboration was very strong. And I’m certain that both of us contributed in such a way that the film is stronger than it would have been if either of us had been directing solo.” Director/writer Ali Weinstein on the film’s heroines: 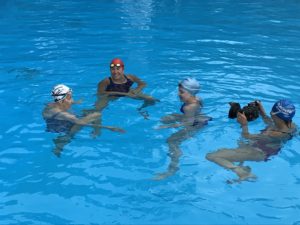 “Working with each of the main characters in our film was so much fun! Their on-screen personalities really capture who they are off-screen: Marilyn is an instant grandma, taking you under her wing and making you feel at home from the second you meet her. Her ongoing interest in the marathon swimming community is something to behold – she will stay up all hours of the night tracking swimmers all over the world via GPS, rooting for them and sending messages of encouragement to them via social media. From the beginning of our research, we started to believe that Marilyn single-handedly created the sense of community that now exists in this sport, at least here in Canada, but it is truly remarkable to see the devotion with which she interacts with the next generation of swimmers.” “Vicki is the fun-loving, dad-joke-telling, larger-than-life character she is on screen, and I was amazed at how she’d manage to sneak in some encouraging coach-like words to me while directing. Her positivity is off the charts, and I think her swimmers are some of the luckiest people in the world to be surrounded by her unending optimism.” The third of six documentaries in TSN’s ENGRAVED ON A NATION series, THE IMPOSSIBLE SWIM premieres Wednesday, Feb. 27 at 7:30 p.m. ET on TSN, with on-demand streaming available through TSN, TSN.ca, the TSN app, and on the all-new Crave.

Not enemies. Not Friends. Not F*king Around. New BILLIONS Seas...