TORONTO (March 16, 2017) – The stakes remain high off the coast of Newfoundland as the captains and crews of COLD WATER COWBOYS return for their most challenging and dangerous season yet. Baiting new fisheries and battling against all odds to land some of the biggest and most lucrative catches in series history, the fourth season of Discovery’s original Canadian series COLD WATER COWBOYS airs Tuesdays at 10 p.m. ET/ 7p.m. PT beginning April 18 on Discovery and Discovery GO. From Paperny Entertainment, the authentic, eight-part series follows the brotherhood of five colourful captains and their crews aboard fishing boats, as they cast their nets in the North Atlantic hundreds of miles offshore. It’s a tough job – tough on boats, tough on gear, and tough on the human body – but these bred-in-the-bone fishermen wouldn’t have it any other way.   Last season, Discovery was the most-watched entertainment specialty channel during COLD WATER COWBOYS’ Tuesdays at 8 p.m. ET timeslot among total viewers and all key adult demographics. Viewers can revisit all episodes of Season 3 of COLD WATER COWBOYS on Discovery GO. 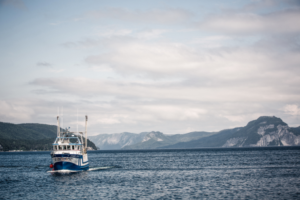 Throughout this new season, the fishermen face big challenges and risks, putting it all on the line for passion and pay days. Skipper Paul Tiller and the Atlantic Bandit are back as Tiller pushes his crew farther offshore than they’ve ever been. Tiller’s courage is tested as he leads his crew through perilous weather and mechanical breakdowns that threaten to leave them stranded in the world’s deadliest ocean. After 25 years of strict regulations, cod is making a comeback, and Tiller and his crew are attempting to see if they have what it takes to reel in this legacy catch. Captain Morris Anstey and the Sebastian Sails are also back, venturing into Iceberg Alley earlier than usual, where large sheets of ice threaten Anstey’s boat and the safety of his crew. But with crab going for record prices, it’s a gamble he’s willing to take. Rick Crane and the boys of the Crane’s Legacy return to the water, but things are far from easy. Still reeling from his father’s death, Crane doubts he can return to fishing. And when he does, it proves an uphill battle. Joining the cowboys this season are lifelong fisherman Calvin Kerrivan and his son, Kurtis. Based in Placentia, N.L., this father and son team head offshore to the far reaches of the continental shelf for an unusual set of fisheries. From whelk to sea cucumber, the duo are leading the way in new and highly profitable markets. Closer to shore, there is a new boat in town, the Jacob Louisa skippered by Lee Pond, a fourth-generation fisherman. Aggressive and passionate, Lee pushes his crew to exhaustion in order to land the most fish in the bay. Episode highlights from Season 4 of COLD WATER COWBOYS: COLD WATER COWBOYS: “Ice, Ice, and More Ice” Tuesday, April 18 at 10 p.m. ET/ 7 p.m. PT Off the east coast of Newfoundland, the crew of the Atlantic Bandit heads into the world’s deadliest ocean. Following his intuition, Captain Paul Tiller takes his crew to a new fishing spot that is further out to sea than they have ever ventured. In this particular area, the weather is rougher and the ocean is treacherous. But with crab going for record prices, Tiller thinks it’s a risk worth taking. Southwest in Cox’s Cove, the Crane’s Legacy is running two days behind the rest of the crab fishing fleet. Over the summer, Skipper Rick Crane suddenly lost his father to cancer and is still reeling from the shock. Back on the east coast, Morris Anstey is steaming the Sebastian Sails straight into Iceberg Alley. Anstey has fished crab in this area before, but never this early in the season, and never facing such icy conditions. COLD WATER COWBOYS: “Jeepers Creepers” Tuesday, April 25 at 10 p.m. ET/ 7 p.m. PT Up in Iceberg Alley, Skipper Morris Anstey and the crew of the Sebastian Sails are in a sea of trouble. So far, this crab season has brought them nothing but grief with no sign of reprieve. With his crab pots empty and his crew losing patience, the skipper must come up with a plan to change their luck – and fast. On the west coast, the Crane’s Legacy is well into the most punishing halibut season the crew has ever encountered. Unprecedented rough weather has compromised their catch. Desperate to make his quota before the fishery closes, Captain Rick Crane pushes his crew beyond all limits. On the opposite side of the island, Skipper Paul Tiller brings an unwelcome guest aboard the Atlantic Bandit – proving this crab trip is the most difficult and dangerous journey of his career. COLD WATER COWBOYS is produced by Entertainment One’s Paperny Entertainment in association with Discovery Canada. Executive Producers are David Paperny, Cal Shumiatcher, Audrey Mehler and Mary Sexton. The series producer is Maria Knight, and VP of Production for Paperny Entertainment is Vera Lubimova. COLD WATER COWBOYS is produced with the participation of the Canada  Media Fund, Newfoundland and Labrador Film Development Corporation, Rogers Cable Network Fund and the Canadian Film or Video Production Tax Credit. For Discovery, Edwina Follows is Executive Producer. Ken MacDonald is Vice-President and General Manager, Discovery Networks. Tracey Pearce is President, Distribution and Pay, Bell Media.  Source: Numeris

Paperny Entertainment is an independent, Vancouver-based production company that has garnered worldwide acclaim for its provocative, innovative, and entertaining television programming. From groundbreaking documentaries to reality television series to lifestyle programming, Paperny excels in capturing the essence of human stories. Acquired by international entertainment leader Entertainment One (eOne) in 2014, Paperny has produced more than 500 hours of provocative television including CHOPPED CANADA, COLD WATER COWBOYS, and TIMBER KINGS. Paperny has robust production operations in Vancouver, Toronto, and New York.