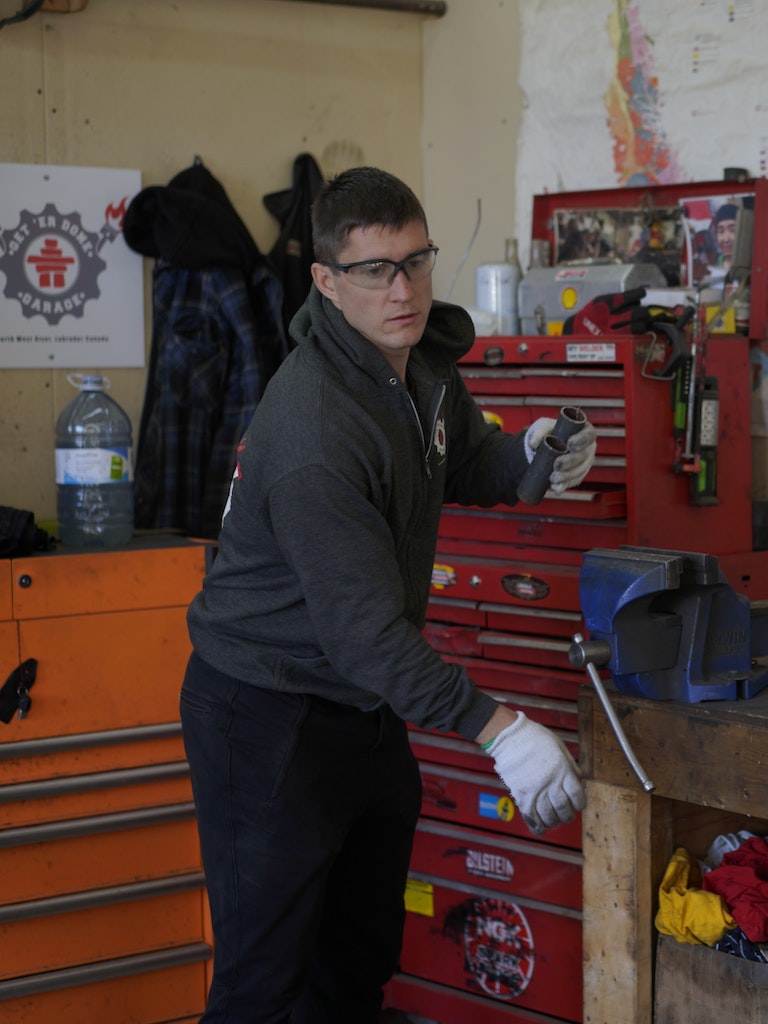 They may live at the far end of the road, but Collin Baikie and Ross Humby of LAST STOP GARAGE want to be close to your heart, especially if it helps their business and their community.

Season 2 of LAST STOP GARAGE wraps up Thursday, April 25, with back-to-back new episodes, starting at 9 p.m. ET on Discovery. The series follows a motley crew of resourceful, ingenious and eccentric mechanics who operate CRB Automotive – a family-owned garage in remote North West River, Labrador, which is one of the furthest points that you can drive to on the Eastern seaboard.

Collin, the owner of CRB Automotive, and Ross, the gas bar manager and No. 1 scrounger, recently paid a visit to Bell Media headquarters in Toronto to talk about LAST STOP GARAGE, what’s in store for the future, and whether or not they feel like big-time TV stars now!

Q: Have you become local celebrities because of LAST STOP GARAGE?

Collin: “Yeah, you could say that! From a business standpoint, I think Season 2 has changed it for the better, for sure. We get people from the States calling us, we get people sending emails saying that they want to come and meet us, we get kids stopping by and they’re so excited. You can tell that people are starting to recognize us now, even when we came to Toronto, the security officers and just random people are starting to come up to us a lot more.”

Q: When people approach you, are they surprised at all? Is the way you’re depicted on the show accurate?

Collin: “There aren’t really any surprises for people, because we are authentic, we’re real, and we are who we are. Ross is who he is, no matter where he is, and I’m the same way, so is Corey (Webber, lead mechanic), my dad (Leander Baikie, co-owner), and everyone else on the show. There was a bit of a change from Season 1 to Season 2, because we got used to TV. So now there is really no hiding who we are.”

Q: It has been pointed out that because of your location, the required parts for your projects just aren’t readily available. It must make you chuckle when you spend all day looking for something, but it probably gets edited down to 30 seconds on the show.

Ross: “A lot of times it does, yes, certainly everything on TV goes really quickly. Sometimes it’s a little bit hard to find some things out there, but there’s always something in someone’s backyard somewhere, something that someone has lying around, whether it’s the right part, or something we can turn into the right part, or we can get it to the boys and they can turn it into the right part. We can see a use in it - me, Leander, Collin, and Corey, we’ve all been doing that most of our lives. To some people, junk is junk, but to other people, junk is something to be made into something else. I can always see a hundred uses for something. Like the old saying goes, one man’s junk is another man’s treasure.”

Q: Moving forward for the business and the show, what are your next steps?

Collin: “Well, the business is expanding, and a lot of it is because of LAST STOP GARAGE. We’re in the process of building a new garage. I think we’re going to start attracting a lot more tourism. That’s why I’m starting a coffee shop, named Last Stop Coffee Shop, with a drive-thru, so people can grab a coffee, stop for a chat if they want, then go up to the garage and take pictures, and get to see what we’ve got going on. We’re hoping it’s going to be really positive for the shop, for the people, for everyone. It already has been so positive for the community. It’s great to be on such a large platform to present what we’ve got.”

Q: In some ways this has become partly a travel-promotion show, because people across Canada, and elsewhere around the world, just don’t tend to think of Labrador all that often.

Collin: “The world is getting to see Labrador, absolutely, and we are the last stop! We really are the LAST STOP GARAGE. Honestly, the furthest you’re going to drive north in Labrador is North West River, you know what I mean? We are the end of the road.”

Q: So there is no false advertising on LAST STOP GARAGE.

Ross: “If you want to go further in Labrador, you have to go by something else other than car.”

Q: But besides the location, you guys love showing off what you can do, too.

Collin: “Everyone gets to see us fixing things and doing things, and doing pretty much the impossible, things that people said can’t be done, we can actually do it. I think that’s the message we want to spread to people. It doesn’t matter where you’re from, or what you’ve got to work with, things are possible. You can make things work, all you have to do is use your brain.”