EDMONTON (August 27, 2019) – After 33 years with CFRN Television and CTV News Edmonton, veteran anchor Daryl McIntyre is announcing his departure from the anchor desk on CTV NEWS AT SIX. McIntyre’s final day co-anchoring the flagship newscast will be Friday, Sept. 13.

“It was about this time of year, 33 years ago, when I said yes to a brilliant opportunity: coming to work at CFRN Television Edmonton as a news anchor and reporter,” recalls McIntyre. “It's the station I grew up with. Taking over the 6 p.m. broadcast in 1989 at the age of 25 was a daunting challenge that has provided me with a lifetime of memories and experiences. I am proud of the work we have done and have nothing but confidence in our CTV Edmonton team continuing that legacy created by so many people before me.”

“Daryl is an outstanding journalist with an unparalleled commitment to truth, authenticity, and accountability,” said Heather Kim, Director of News and Public Affairs, CTV Edmonton. “Daryl’s integrity, sharp wit, and straightforward style will be missed in our newsroom, but the benefits of his mentorship will be felt for many years to come. On behalf of everyone currently at CTV Edmonton and those who came before us, I want to thank Daryl for his contributions, his leadership, and his friendship. We wish him the very best as he enters this next chapter in his life.”

McIntyre has been with CFRN and CTV Edmonton since October 1986. He began his broadcasting career in radio in the spring of 1983 at the CKO Radio Network. Soon after, he reported news for both TV and radio in Lloydminster, Alta. when he was just 19. 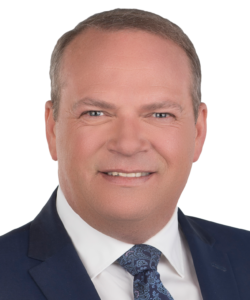 In 1985, McIntyre moved to Prince George, B.C. to host the suppertime newscast. But, his sights were set on getting back to Edmonton, so a year and a half later, McIntyre was back in his hometown where he joined the CTV News team as weekend anchor and city hall reporter. In 1989 he moved to the 6 p.m. anchor desk joining CFRN Edmonton icons Daphne Kuehn, Al McCann, and Eric Neville. McIntyre was only 25 when he became Kuehn’s co-anchor.

Over the years, McIntyre anchored coverage of a number of historic events. Among them, the March 2005 shootings of four Mounties in Mayerthorpe; the May 2011 wildfire that devastated the town of Slave Lake; the 1987 tornado that caused significant damage to the city of Edmonton and claimed 27 lives; and the 2016 wildfires that devastated Fort McMurray.

Among McIntyre’s career highlights was travelling to New York City in 2010 to be with a young boy named Maddox as he underwent life-changing surgery. Maddox had a large growth on his face that doctors here could not treat. Edmontonians raised more than $175,000 to send the boy to New York City to see a specialist, and McIntyre travelled with him to ensure Edmontonians could follow his progress.

A graduate of NAIT'S Radio and Television Arts Program, McIntyre was named one of NAIT’s top 50 graduates of the past 50 years in 2012. In 2011, he helped lead the CTV Edmonton newsroom to the Radio Television Digital News Association Canada’s Bert Canning Award for Best Newscast in a large market for the station’s coverage of the Slave Lake Wildfire. McIntyre’s work also helped the station win awards for Spot News Coverage and Continuing Coverage of the devastating fire. In 2017, he was named “Best Local News Anchor” at the Canadian Screen Awards.

CTV News is Canada’s most-watched news organization both locally and nationally, and has a network of national, international, and local news operations. CTV News operations include CTV NEWS CHANNEL, BNN Bloomberg, CP24, and information programming, including CTV NATIONAL NEWS WITH LISA LAFLAMME, CTV NATIONAL NEWS WITH SANDIE RINALDO, W5, POWER PLAY, and QUESTION PERIOD. Flagship news sites include CTVNews.ca, as well as CP24.com and BNNBloomberg.ca, and are complemented by the CTV News, CP24, and BNN Bloomberg apps, and text-over-video product, ON THE GO, which provide a direct connection to Canada’s most trusted news anytime and anywhere. With a perspective that is distinctly Canadian, CTV News brings Canadians the international and domestic news stories of the day and is the #1 news organization in Canada.

Sixth Team Eliminated on Tonight’s Episode of CTV’s THE AMAZIN...