KITCHENER, ONT. (August 15, 2019) – CTV News Kitchener announced today the appointment of Rosie Del Campo as Weekday Anchor, CTV NEWS AT SIX. Del Campo has built a solid reputation as a trusted journalist in the region and is committed to her community. She has been with CTV Kitchener for more than a decade as a videographer and anchor, and most recently has been co-hosting and producing CTV News Kitchener’s CTV NEWS AT FIVE. Del Campo begins her new role on Monday, Aug. 19.

“For over a decade I’ve been fortunate enough to deliver the news to Kitchener and surrounding areas,” said Del Campo. “This is a very exciting opportunity and I’m looking forward to bringing our community the top stories of the day on CTV NEWS AT SIX.” 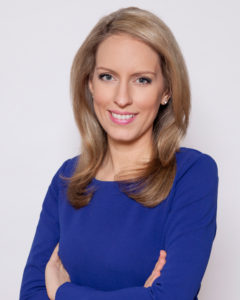 “Rosie is a dedicated journalist who makes it her mandate to tell the stories of her community with balance and skill. We are excited to see her take on this role,” said Kristin Wever, Regional News Director, Radio & Local TV, Bell Media. “She connects with our viewers and knows how to present the stories that matter most.”

Del Campo takes over the role of Weekday Anchor from Meghan Furman, who recently announced she will be stepping away from broadcasting.

A graduate of the journalism program at Ryerson University, Del Campo is a veteran journalist with 12 years of experience in the CTV News organization, covering breaking news on CTV NEWS AT SIX and anchoring CTV NEWS AT 11:30. She was instrumental in helping with the creation and inception of CTV NEWS AT FIVE in the Kitchener market when it launched in September 2017. Del Campo joined the CTV Kitchener news team as a videographer in May 2008, prior to which she was a video-journalist and anchor of CTV NEWS AT 11:30 in Saskatoon, Sask.

CTV News is Canada’s most-watched news organization both locally and nationally, and has a network of national, international, and local news operations. CTV News operations include CTV NEWS CHANNEL, BNN Bloomberg, CP24, and information programming, including CTV NATIONAL NEWS WITH LISA LAFLAMME, CTV NATIONAL NEWS WITH SANDIE RINALDO, W5, POWER PLAY, and QUESTION PERIOD. Flagship news sites include CTVNews.ca, as well as CP24.com and BNNBloomberg.ca, and are complemented by the CTV News, CP24, and BNN Bloomberg apps, and text-over-video product, ON THE GO, which provide a direct connection to Canada’s most trusted news anytime and anywhere. With a perspective that is distinctly Canadian, CTV News brings Canadians the international and domestic news stories of the day and is the #1 news organization in Canada.

Crave Becomes the Exclusive Canadian Home of HOMELAND for its ...