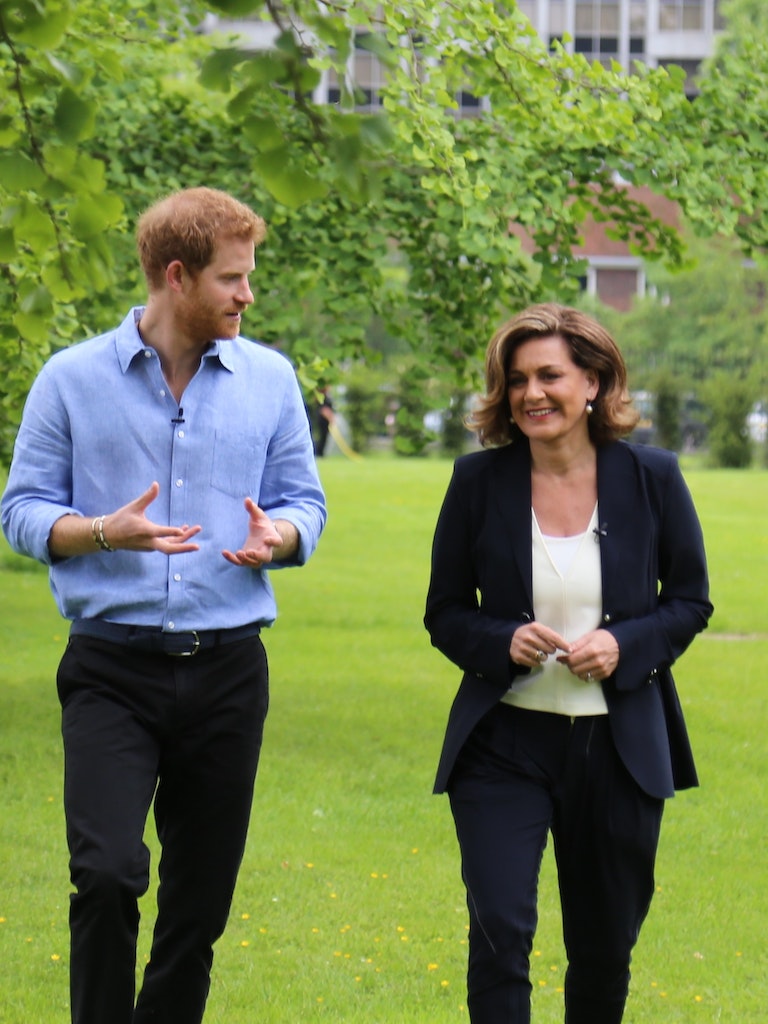 – Extensive interview special offers rare access inside London’s Kensington Palace, as the Prince reflects on his mother’s enduring inspiration, his experiences in the military, and his passion for supporting veterans with this September’s INVICTUS GAMES TORONTO 2017 –
– Portions of the exclusive interview airing tonight (June 14) on CTV NATIONAL NEWS WITH LISA LAFLAMME –

“…these individuals are proving that if you have a second chance in life, to make the absolute most of it.” – Prince Harry, on the INVICTUS GAMES

“She drew a spotlight to the causes and the issues that no one wanted to talk about.” – Prince Harry, on his mother Diana, Princess of Wales

TORONTO (June 14, 2017) – In the lead-up to this fall’s INVICTUS GAMES TORONTO 2017, CTV News’ Chief Anchor and Senior Editor Lisa LaFlamme sits down with His Royal Highness Prince Henry of Wales at his home in Kensington Palace for a world exclusive, hour-long interview special PRINCE HARRY: JOURNEY TO INVICTUS, airing Friday, June 16 at 9 p.m. ET/PT on CTV. Tonight (Wednesday, June 14 at 11 p.m. ET/PT), CTV NATIONAL NEWS WITH LISA LAFLAMME will air portions of the rare and revealing interview. “This special is a long-form, candid conversation that offers viewers an intimate view of Prince Harry from Kensington Palace – early memories of Canada, the life and legacy of his mother Diana, his military career, and his passion for supporting veterans as the founder of the INVICTUS GAMES,” said LaFlamme. “We’re also proud to share with our viewers some incredible stories of veterans and their personal journeys to the Games they inspired the Prince to create.”

Covering a wide range of topics during the primetime special, the pair discuss the Prince’s 10 years in the British military, his two tours in Afghanistan, and how these experiences shaped his mission to ensure that wounded soldiers and their families are given the proper support to recover from their injuries, both physical and mental. Throughout PRINCE HARRY: JOURNEY TO INVICTUS, the Prince also reflects on his childhood experiences in Canada, as well as his impressions of Canadians and their relationship with the Royal Family. And 20 years after the death of his mother Diana, Princess of Wales, Prince Harry describes how her compassion and charitable spirit continue to inspire him and the work he does today. The special also shares a special meeting with the Prince, as he welcomes to his London residence two wounded British veterans who will compete at the INVICTUS GAMES TORONTO 2017 in September: Sgt. (Ret’d) Michelle Turner, and Gdsm. (Ret’d) Lamin Manneh. Also, CTV News catches up with Team Canada co-captain and INVICTUS gold medal winner, MCpl. (Ret’d) Natacha Dupuis, as she trains for the upcoming games. Sharing their stories of bravery in action and courage to move forward despite great personal pain, Canadians are offered a first-hand glimpse of some of the incredible stories that inspired the international event, and keep the Prince passionate about making sure wounded veterans get the support they need to recover from their injuries. Established by Prince Harry in 2014, the INVICTUS GAMES competition is the only international adaptive sporting event for wounded, injured, and ill active duty and veteran service members. Tickets to the INVICTUS GAMES TORONTO 2017 are available on the event’s official website beginning this Thursday, June 15. Bell Media is the exclusive Canadian broadcast partner of the INVICTUS GAMES TORONTO 2017. PRINCE HARRY: JOURNEY TO INVICTUS is an exclusive CTV News production, with Chief Anchor Lisa LaFlamme. Rosa Hwang is Executive Producer. Stéphane Brisson is Director of Photography. Paul Flynn is Principal Editor, with additional editing by Angelo Altomare. Wendy Freeman is President, CTV News.

CTV News is Canada’s most-watched news organization both locally and nationally, and has a network of national, international, and local news operations. CTV News operations include CTV NEWS CHANNEL, BNN – Business News Network, CP24, and information programming, including CTV NATIONAL NEWS WITH LISA LAFLAMME, CTV NATIONAL NEWS WITH SANDIE RINALDO, W5, POWER PLAY, and QUESTION PERIOD. Flagship news sites include CTVNews.ca, as well as CP24.com and BNN.ca, and are complemented by CTV News GO, CP24 GO, and BNN GO apps, and text-over-video product, ON THE GO, which provide a direct connection to Canada’s most trusted news anytime and anywhere.  With a perspective that is distinctly Canadian, CTV News brings Canadians the international and domestic news stories of the day and is the #1 news organization in Canada.

A Gift Made for Canadians by Canadians: CANADA IN A DAY Premie...

TSN Tees Up Exclusive and Complete Live Coverage of Golf’s 117...