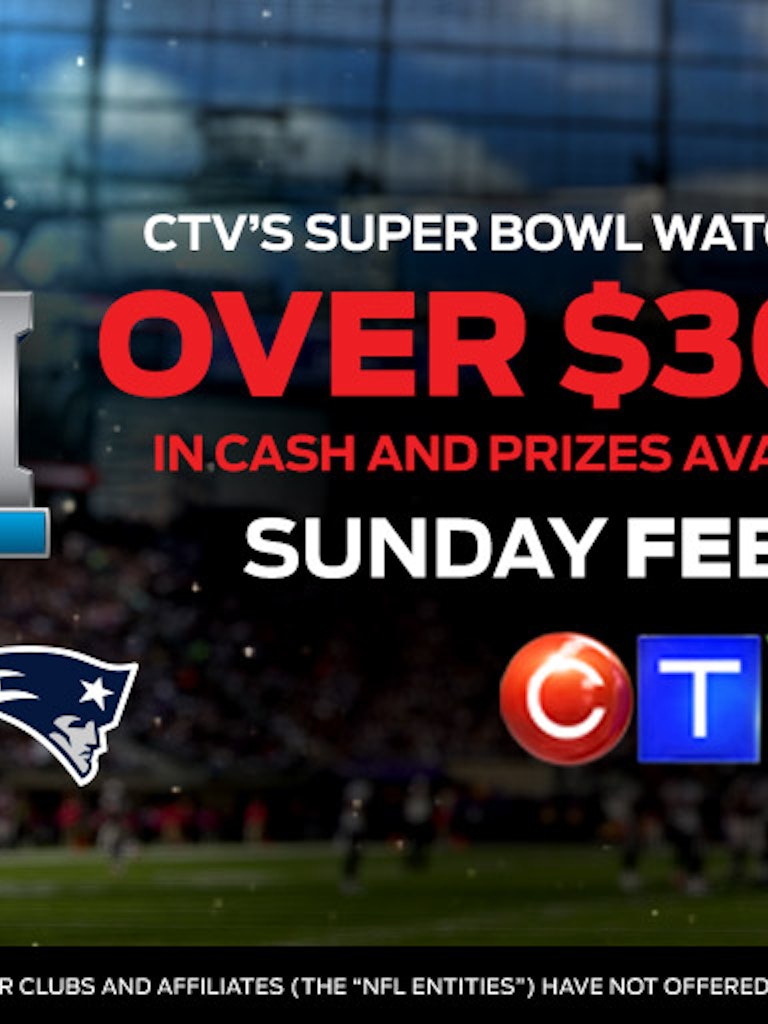 – Superstar comedian Russell Peters to appear throughout the game –

– SUPER BOWL LII sponsors include Nissan Canada, the official vehicle of the NFL –

TORONTO (January 29, 2018) – SUPER BOWL LII is set to touch down on CTV as the network announced today broadcast details for one of the biggest television events of the year. Live from U.S. Bank Stadium in Minneapolis, and featuring the defending SUPER BOWL and reigning AFC champion New England Patriots taking on the NFC champion Philadelphia Eagles, SUPER BOWL LII coverage begins Sunday, Feb. 4 at 6 p.m. ET on CTV, CTV Two, and TSN2, with an expansive slate of pre-game coverage starting at 12 noon ET on CTV. CTV’s broadcast features the return of its popular WATCH TO WIN CONTEST, which again includes an extraordinary slate of prizes up for grabs exclusively to Canadians watching the big game on CTV, CTV Two, or TSN2. Canadian viewers have the chance to win a trip to next year’s Super Bowl LIII in Atlanta, a 2018 Nissan Titan, or one of three cash prizes including a grand prize of $150,000. TSN’s Natasha Staniszewski and Tessa Bonhomme will provide live contest updates and entry details throughout the broadcast, including the keyword for each prize. CTV also confirmed today it has nabbed international comedic superstar Russell Peters to keep Canadians laughing throughout the SUPER BOWL LII broadcast. Peters will appear in a series of humorous video bits, only available to Canadian viewers watching on CTV, CTV Two, and TSN2. Leading up to SUPER BOWL LII, Canadian fans can visit BigGameAds.ca to keep up to date on all of the American SUPER BOWL ads released in advance of the big game. In addition to the 2018 ads, the site also features fan-favourite ads from years past. Then, following the game, a special episode of CTV’s hit drama THIS IS US airs in the most coveted timeslot in primetime television, immediately follows the conclusion of CTV’s SUPER BOWL broadcast. The new episode is a continuation of last Tuesday’s SUPER BOWL-themed episode which centered on the football-loving Pearson family in 1998, and ended with a heartbreaking cliff-hanger. The Feb. 4 episode is set to answer viewer’s questions about how Jack (Milo Ventimiglia) died, with creator Dan Fogelman saying “it’s probably inarguably our saddest episode.” The cast of THIS IS US will appear on the TONIGHT SHOW STARRING JIMMY FALLON to discuss the episode at 11:50 p.m. ET on CTV Two, with SUPER BOWL halftime performer Justin Timberlake also stopping by. “CTV is again poised to deliver extensive coverage throughout SUPER BOWL Sunday, and with the return of the WATCH TO WIN CONTEST, Canadians tuning in to CTV have a chance to win some truly lucrative prizes through our exciting real-time contesting element,” said Mike Cosentino, President, Content and Programming, Bell Media. “As one of the most talked-about series on television, the Pearson family works perfectly with THIS IS US in our coveted post-SUPER BOWL timeslot.” Nissan Canada, the official vehicle of the NFL, is back as a sponsor, along with returning advertising partners KITKAT, TDL, Panago, and Bell Canada, while new advertising partners include JP Wiser's, Google Canada - with Google Pixel and Google Home - and Heineken 0.0. “The SUPER BOWL continues to provide an exceptional platform for our partners to reach Canadians from coast-to-coast-to-coast,” said Stewart Johnston, President, Media Sales, Marketing, and TSN, Bell Media. “We’re delighted to continue our collaborations with a strong roster of returning brands, and welcome a number of new partners who will be featured throughout the big game.” Throughout this week, TSN’s James Duthie along with Jabari Greer, Israel Idonije, and Jesse Palmer host coverage of SUPER BOWL LII for SPORTSCENTRE on TSN. Following the game, SPORTSCENTRE provides analysis and discussion live from U.S. Bank Stadium on TSN. In addition to CTV’s slate of pre-game coverage on Sunday, CTV Two joins at 5:30 p.m. ET, while TSN delivers the final 30-minutes of pre-game coverage at 6 p.m. ET. CTV Two and TSN2 join CTV to broadcast the championship game and post-game celebrations, including the presentation of the Vince Lombardi Trophy. The triple-simulcast also includes Justin Timberlake bringing sexy back during the Pepsi Super Bowl LII Halftime Show. SUPER BOWL LII Broadcast Schedule Surrounding coverage begins on Saturday, Feb. 3, as CTV airs SPORTSCENTRE: TOP NFL PLAYS OF THE YEAR at 3:30 p.m. ET (encores at 4:30 p.m. ET on TSN3, TSN4, and TSN5), as well as 30 FOR 30: THE TWO BILLS at 2 p.m. ET (encore broadcast at 8 p.m. ET on TSN). Bell Media’s extensive live coverage of SUPER BOWL LII from U.S. Bank Stadium in Minneapolis on Sunday, Feb. 4 begins at 12 noon ET on CTV, with additional coverage throughout the day, including the following highlights (visit CTV.ca to confirm local broadcast times): Live coverage of SUPER BOWL LII is also available on TSN Radio stations across the country including TSN 690 Montréal, TSN 1200 Ottawa, TSN 1050 Toronto, TSN 1150 Hamilton, TSN 1290 Winnipeg, TSN 1260 Edmonton, and TSN 1040 Vancouver, and can be live-streamed on CTV.ca and via TSN.ca/Live for TSN subscribers, as well as on the CTV GO and TSN GO apps. RDS delivers live French-language coverage of SUPER BOWL LII beginning at 5 p.m. ET. Bell Media’s CTV, CTV Two, TSN, and RDS are the exclusive television broadcast partners of the NFL in Canada.

It's Bell Let's Talk Day! Get engaged to help end the stigma a...