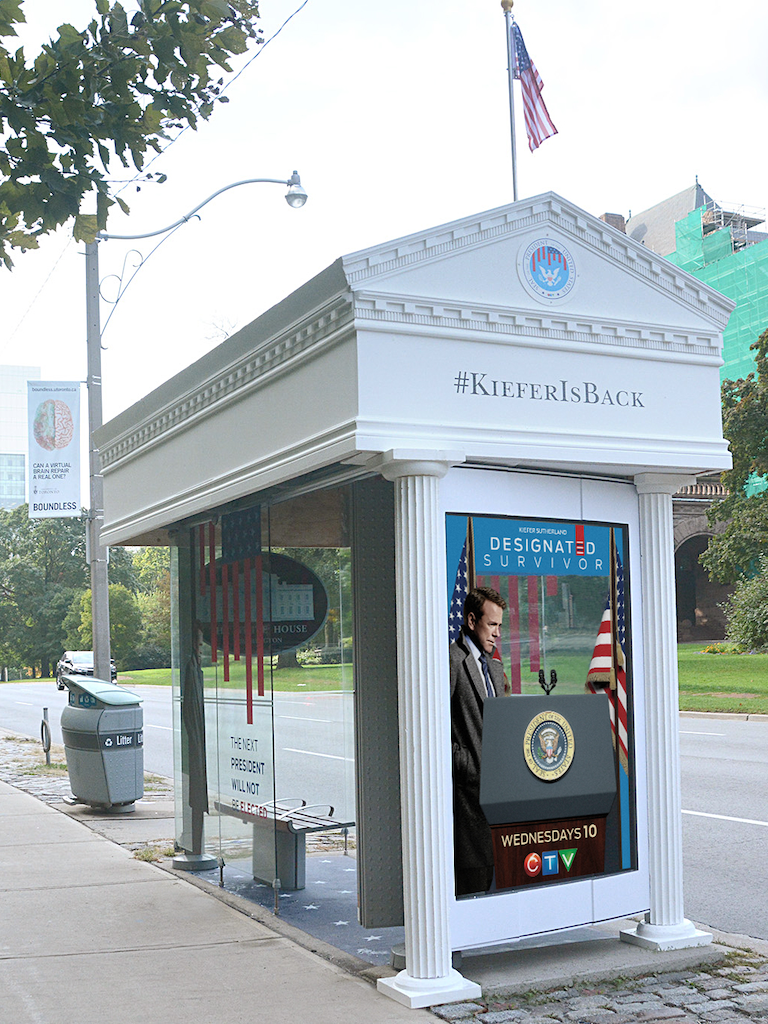 TORONTO (September 20, 2016) – Astral Out of Home (AOOH), a division of Bell Media, announced today the launch of an all-new original out-of-home campaign to promote this Wednesday’s (Sept. 21) premiere of new CTV political conspiracy thriller DESIGNATED SURVIVOR. Created by the award-winning Bell Media Agency in collaboration with Astral Out of Home, the campaign includes innovative decals, extensions, and structural additions in strategic locations, transforming street furniture into the White House, weeks before the U.S. presidential election. “The DESIGNATED SURVIVOR campaign for CTV speaks to the flexibility of out-of-home advertising,” said Jordana Fatsis, Vice-President, Sales, Astral Out of Home. “Our team thrives on innovation and is proud to be a partner of choice for advertisers aiming to stand out and instantly connect with consumers.” “We are happy to leverage Astral Out of Home’s network to bring our promotional campaign for one of CTV’s most highly anticipated new fall programs to life,” said Jon Arklay, Senior Vice-President, Bell Media Agency: Brand, Creative, and Marketing. “Thanks to a visually stunning creative with a strong call to action on prime and strategically located advertising structures, we think the campaign will resonate with Toronto viewers.” The campaign leverages the return of Kiefer Sutherland in the conspiracy thriller along with the timeliness of the U.S. election. Featured are inventive, high-impact decals and wraps, including a transit shelter made to look like the White House with elements featuring a roof, pillars, a blue carpet, and even a podium for selfies. In addition, a Superboard with a simulated White House roof and U.S. flags can be seen by tens of thousands of drivers on the Gardiner Expressway. DESIGNATED SURVIVOR stars Emmy® and Golden Globe® winner Kiefer Sutherland (24) as Tom Kirkman, a lower cabinet member who unexpectedly becomes president after a devastating attack on Washington. He will struggle to prevent the country and his own family from falling into chaos, as he is thrust into one of the most difficult presidencies in history. DESIGNATED SURVIVOR premieres this Wednesday, Sept. 21 at 10 p.m. ET on CTV.

About Astral Out of Home
Astral Out of Home, a division of Bell Media, is one of Canada’s leading out-of-home advertising companies with more than 30,000 advertising faces strategically located in the British Columbia, Alberta, Ontario, Québec, and Nova Scotia markets. Driving innovation on one of the country’s most dynamic media platforms, Astral Out of Home is committed to staying at the forefront of the latest technological trends, offering advertisers the opportunity to deliver powerful messages that engage and connect with consumers. For more details, visit www.bellmedia.ca.