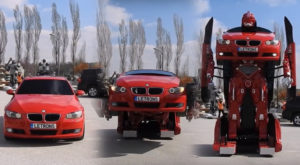 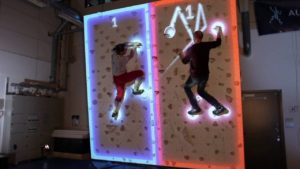 TORONTO (November 23, 2016) – It’s beginning to look a lot like…“High-Tech Toys Week”! Santa’s helpers, better known as the team behind Discovery’s daily sci-tech series DAILY PLANET, are hard at work preparing for every tech toy-lover’s favourite week of the year, “High-Tech Toys Week”. Airing exclusively on Discovery beginning Monday, Dec. 5 through Friday, Dec. 9 at 7 p.m. ET/4 p.m. PT, DAILY PLANET explores a week full of boundless innovation and imagination. From a life-size Transformer car to vertical air hockey, viewers are invited to join co-hosts Ziya Tong and Dan Riskin as they fill Santa’s sleigh with the season’s most exciting, outlandish, and coveted high-tech toys from around the world. “High-Tech Toys Week” was the second most-watched theme week on DAILY PLANET during the 2015/16 broadcast year, trailing only “Future-Tech Week”. DAILY PLANET, the world’s only nightly science broadcast reaches more than 1.3 million viewers each week and continues to win the 7 p.m. ET timeslot among Canadian entertainment specialty channels during the 2016/17 broadcast year among all key adult demographics. Highlights from DAILY PLANET’s “High-Tech Toys Week” include: “Transformer Car” The BMW can now shapeshift from a car into huge robot, thanks to a prototype designed by Turkish company, Letrons. The Antiomon is a real-life, nearly five-metre tall Transformer with driving capabilities. A total of five working models were developed by a team of 12 engineers, with each featuring a 35,000 hydraulic cylinder system that allows for quick and effective transformations. DAILY PLANET meets with the development team to discuss the Antiomon’s price tag in advance of its consumer debut. “Teal Highspeed Drone” George Matus was 11 years old when he flew his first drone and was immediately blown away. By 16, Matus was competing as a professional drone racer and acting as a test pilot for new aircraft. Today, Matus is the CEO of his own drone and software company, Teal. After years of flying, crashing, rebuilding, and modifying dozens of versions of drones, Matus has completed his dream drone, the Teal. The highly impressive unmanned aircraft flies at more than 120 kilometres per hour, can operate in wind speeds of 64 kilometres per hour, and has a built-in camera, GPS, and autonomous capabilities. From gaming and augmented reality to security applications and agriculture, Matus wants to make this drone do anything the imagination can conjure. Testing diffferent flight propellers and evaluating for speed, noise, and handling, Matus and the Teal team join DAILY PLANET as they race to get to market “the world’s fastest production drone in its class.” “Climball” What is the result when pinball, air hockey, wall climbing, and a splash of augmented reality mix together? Climball – a high-tech, fast-paced game combining  augmented reality technology with rock climbing. The physically engaging game tracks the players’ movements while they compete to volley a virtual ball. DAILY PLANET climbs on board to get a closer look at the tech behind the newest way to get into shape. “The PancakeBot” Marking the very first food printer of its kind, the $300 PancakeBot  is the brainchild of Miguel Valenzuela, a civil engineer, inventor, and father living in Norway. A container of batter is attached to PancakeBot’s mechanical printing arm where underneath sits a flat, heated griddle that acts as its canvas. Users can turn almost anything into a yummy breakfast treat – a child’s drawing, a product image, a team’s logo, or even a favorite piece of artwork. DAILY PLANET meets with Valenzuela, who spills the batter on PancakeBot’s food printing technology. “Amphibious Helicopter” Novelty car builder Jeff Bloch, also known as SpeedyCop, is the master of developing crazy, homemade cars. He’s built a fighter jet car, an upside down Camaro, and even a car that stretches out like an accordion – all capable of racing at 24 Hours of LeMons, a series of endurance races held on paved courses across the U.S. This year, Bloch recycled a damaged helicopter from the Vietnam War and transformed it into a mighty machine that can race on land and in water, making the gadget an entirely amphibious helicopter. Although it can’t take flight just yet, it has some truly astounding capabilities! DAILY PLANET meets Bloch to discuss how he intends to take these off-the-wall vehicles from the junkyard to the racetrack. “Carr-E” Many city drivers have experienced the congestion of downtown roadways during rush hour – the impatience, the frustration, and the worry. Well, Ford Motor Company is hoping to prevent commuter frustration with the “Last Mile Mobility Challenge”. One of this year’s finalists is Kilian Vas, a Ford engineer who has designed and built the Carr-E. An easily transported, segway-like vehicle, the Carr-E can propel motorist through all types of traffic. Carr-E’s ultrasonic sensors and built-in GPS allow it to navigate through busy streets, avoiding any obstacle thrown in its path. DAILY PLANET meets with Vas to test out the four-wheel, electric pedestrian assistant that could potentially be the next big breakthrough in urban commuting. Subscribers can catch up on past episodes on demand on the Discovery GO app and at Discovery.ca. Live streaming of DAILY PLANET is also available on Discovery GO. Source: Numeris

With compelling real-life programming that inspires and entertains, Discovery reveals the world in all its wonder, diversity and amazement. Discovery offers a signature mix of adrenaline-charged stories, larger-than-life personalities and vivid imagery for viewers with curious minds. With the best non-fiction programming from Canada and around the world, Discovery captures the excitement of a passion for life – one lived fully and at its most extreme. With exceptional and immersive storytelling, the channel offers in-depth, behind-the-scenes glimpses at the extraordinary people and places that shape our world. Launched in Canada in 1995, Discovery is now available in more than eight million Canadian homes. Discovery Canada is a joint venture between Bell Media, which is owned by BCE Inc. (TSX, NYSE: BCE), Canada’s largest communications company, and Discovery Communications Inc. Find more information and interactive online features at Discovery.ca.

Things Get Real with THE BEAVERTON’s Fake News as Nearly 400,0...