– Moncton, N.B.’s Line Pelletier is the runner-up –
– Production on Season 3 of MASTERCHEF CANADA begins this fall, and new hopeful home cooks can apply online at CTV.ca/MasterChefCanada –
– MASTERCHEF CANADA is the #1 Canadian series with total viewers and in the key A18-49 and A25-54 demos for the broadcast year to date –

TORONTO (May 24, 2015) – After a 15-episode cornucopia of home cooks, challenges, and ingredients, it was revealed tonight by judges Michael Bonacini, Alvin Leung, and Claudio Aprile that concrete contractor David Jorge (@concrete_cook) from Surrey, B.C., is the winner of MASTERCHEF CANADA Season 2. Following a three-course culinary battle that saw the Top 2 home cooks elevate their dishes to a professional level, David was awarded the coveted title of MASTERCHEF CANADA and the $100,000 grand prize over runner-up Line Pelletier (@TheSaucyLine), a Canadian military veteran and computer specialist from Moncton, N.B. Canadians hoping to follow David’s success in the MASTERCHEF CANADA kitchen can apply online now at CTV.ca/MasterChefCanada for Season 3. 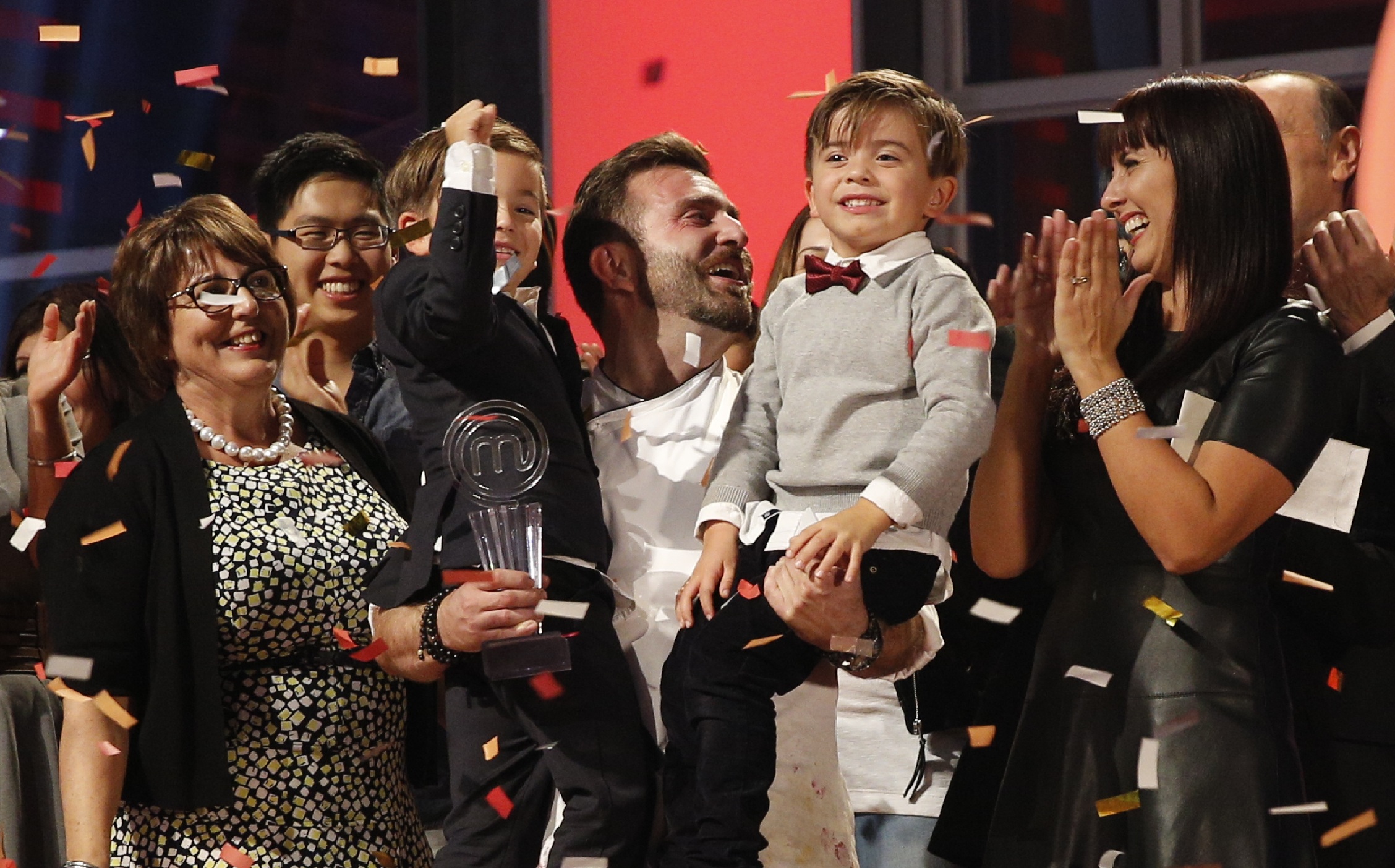 “I am honoured to be named Canada’s next MasterChef, as there were so many worthy home cooks in the kitchen this season,” said David Jorge. “It has been my life-long dream to open a restaurant, and now I can make it a reality – all thanks to the support of my family and friends.” In tonight’s season finale, David and Line were challenged to create a three-course meal with their families and former opponents cheering them on. The appetizer round saw Line’s refined lobster and foie gras surf and turf compete against David’s tomatoes prepared five ways with crispy sweetbreads. Line won the first round, as David’s sweetbreads were deemed slightly tough. However, David’s main course of wild boar belly with geoduck clams impressed the judges and he took the second round against Line’s butter-basted elk tenderloin, which was undercooked. In the third round, David raced against the clock to complete his lemon curd parfait, but he managed to pull it off with exquisite results, while Line’s take on a dessert cheese plate with chocolate-olive bread and pistachio brittle was a pleasant surprise for the judges. Ultimately, it was David’s three-course meal that won over the judges, topping off his stellar performance all season long, and earned him the title of Canada’s next MasterChef. MASTERCHEF CANADA is the #1 Canadian series for the broadcast year to date with total viewers and in the key A18-49 and A25-54 demos. Currently averaging 1.6 million viewers, the series is also a Top 15 show this spring with total viewers and the key A18-49 and A25-54 demos. For those who would like to cook in the MASTERCHEF CANADA kitchen, the series is seeking passionate and talented home cooks who want to pursue their culinary dream for its third season. Details on how to apply for MASTERCHEF CANADA Season 3 are available at CTV.ca/MasterChefCanada, and Canadian home cooks have until 11:59 p.m. ET on July 19, 2015 to show their interest. Interviews are slated to take place in June and July, and applicants are encouraged to apply early to meet producers when they are in their region. Casting will come to an end with an Open Casting Call in Toronto on July 18 and 19, with additional details to be announced this summer. Viewers wanting to relive the season’s excitement can watch MASTERCHEF CANADA episodes on demand on CTV GO and CTV.ca, and the Season 2 finale encores on Friday, May 29 at 9 p.m. ET on M3, Saturday, May 30 at 7 p.m. ET/PT on CTV Two, and Sunday, May 31 at 5 p.m. ET/PT on CTV. David can be seen live on CANADA AM (Weekdays at 6 a.m. ET), THE MARILYN DENIS SHOW (Weekdays 10 a.m. ET), THE SOCIAL (Weekdays at 1 p.m. ET), CP24 BREAKFAST (Weekdays 5:30 a.m. ET), and CTV MORNING LIVE ATLANTIC (Weekdays at 7 a.m. AT on CTV Two Atlantic) on Monday, May 25 as he discusses his MASTERCHEF CANADA triumph. The MASTERCHEF format is represented internationally by Endemol Shine Group, and is based on a format originally created by Franc Roddam. MASTERCHEF CANADA is produced by Proper Television in association with CTV. President of Proper Television, Guy O'Sullivan is executive producer, along with Proper's Vice-President and Creative Director, Cathie James.  For Bell Media, Tina Apostolopoulos is Production Executive, Factual and Reality, Independent Production. Robin Johnston is Director, Factual and Reality, Independent Production. Corrie Coe is Senior Vice-President, Independent Production. Mike Cosentino is Senior Vice-President, Programming, CTV Networks and CraveTV. Phil King is President - CTV, Sports, and Entertainment Programming. SOCIAL MEDIA LINKS: Twitter: #MasterChefCanada @CTV_PR @CTV_Television @MasterChefCDA Michael Bonacini – @MichaelBonacini Alvin Leung – @TheDemonChef Claudio Aprile – @ClaudioAprile David Jorge – @concrete_cook Line Pelletier – @TheSaucyLine   Facebook: facebook.com/ctv facebook.com/MasterChefCDA   Instagram: MasterChefCDA BellMediaPR Claudio Aprile – claudioaprile1 David Jorge – concrete_cook Line Pelletier – TheSaucyLine

GAME OF THRONES Conquers the Big Screen When HBO Canada and Ci...