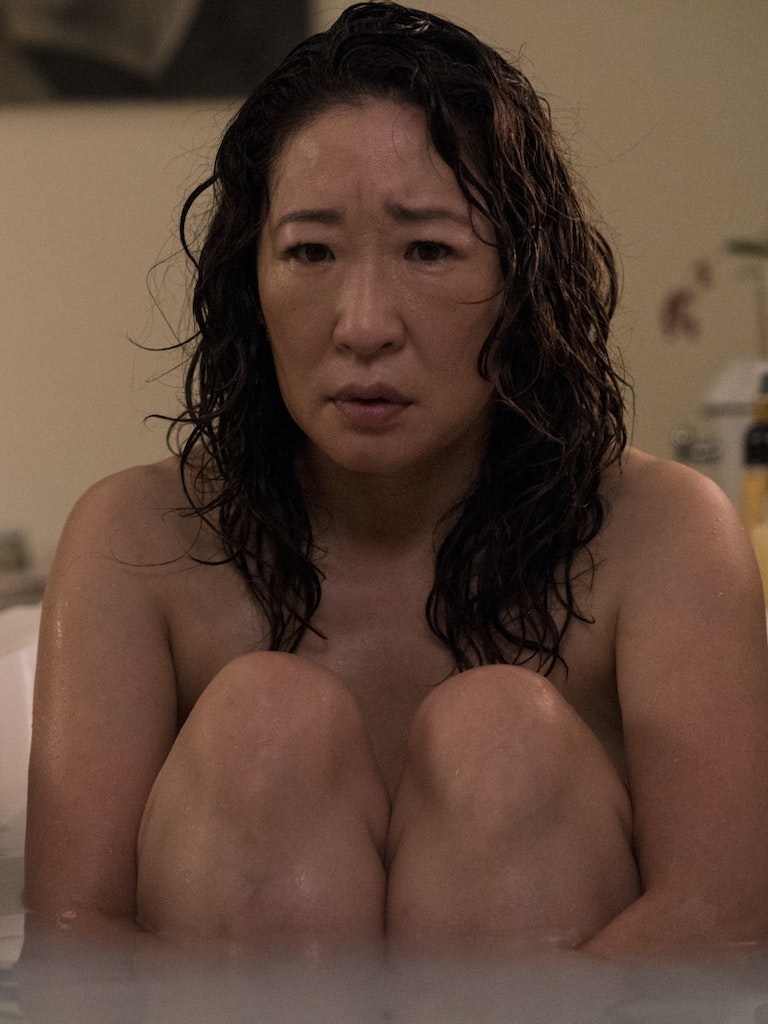 As Season 2 of Bravo’s smash-hit thriller KILLING EVE begins, the title is somewhat ironic. Why? Because Eve is very worried that she might be a killer herself!

One of the most acclaimed TV series in recent years, KILLING EVE returns Sunday, April 7, at 8 p.m. ET on Bravo. The series stars Sandra Oh as Eve and Jodie Comer as Villanelle, and focuses on the dangerous, sensual, mutual fascination between the two characters which culminated in a violent confrontation as Season 1 ended. Eve does not even know whether Villanelle is alive or dead.

“It’s the immediate moment afterwards,” says Oh, when asked where Season 2 picks up. “We rush right back in.”

Fans are keen to rush right back in, too! Oh set the scene at the recent Television Critics Association event in Los Angeles:

Q: How are Eve and Villanelle different in Season 2 of KILLING EVE?

Sandra Oh: “They've crossed the line. There's kind of no going back, and I think we have a lot of energy at the beginning of (Season 2), and that pushes both of them into a different place of vulnerability. I think you see them vulnerable in slightly different ways.”

Q: There are a lot of good shows on TV these days, and not all of them connect with audiences, but KILLING EVE really has. What’s the secret?

Sandra Oh: “I gotta tell you, that's the question that I would pose to (TV reporters). Because you guys watch everything, and so really, why do you think so? I mean, we're in it, we're in the middle of it, we're delving into our own psyches, just doing the work as best as we can. But I don't know. I would ask you that.”

Q: Whatever the reasons may be, all the attention and the awards must be gratifying for you.

Sandra Oh: “There has been so much outpouring of support. As celebrations and nominations and accolades have happened, for the show and for myself as well, being in rooms where people are just so warm, industry-wide, has just been great, fantastic. And also just people on the street, which is kind of even more exciting, because you see that our show actually has range in an audience, which is really tough to get, a range of age, a range of taste. So that has been great to see that feedback.”

Q: How much have you enjoyed surprising people with this role, because it’s so different from the kinds of roles you were known for previously?

Sandra Oh: “I feel that you're putting a lot of context around personal choices, and creative choices, that I know for myself, I don't know if it moves with that overall context going through and making my choices. I am happy if it does open up and contribute, in any kind of way, to wanting to see more stories about female characters that are complex and have a lot of depth. But I am interested in just what I'm interested in. You know, that happens to lend to probably what you're saying, the context, but that's not, I know, for me, the driving force.”

Q: Eve and Villanelle have such a bizarre fascination with each other, but for Eve in particular, this is a rocky path that can’t really be resolved, right?

Sandra Oh: “How can you come to terms with something, a relationship that seems to be impossible? That’s what I feel like we’re trying to figure out daily. I think Eve has to examine those (moral dilemmas) within herself. I feel that by the end of the second season, Eve will really try her best to make a clear moral decision.”

Q: It’s such a threateningly romantic dance between the two of them.

THIS JUST IN: MTV unveils first look of THE HILLS: NEW BEGINNI...