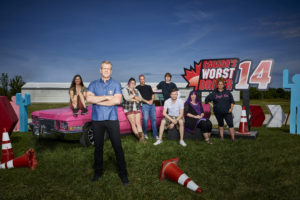 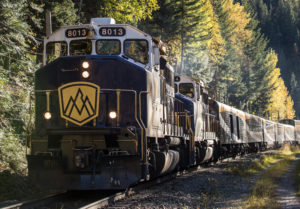 Discovery’s jam-packed programming schedule during the free preview features the following highlights: MIGHTY TRAINS – Season premiere Oct. 14 Sundays at 7 p.m. ET / 4 p.m. PT Each one-hour episode of MIGHTY TRAINS is a journey into the fascinating world of rail travel, as host Teddy Wilson tells the stories of six exceptional trains and their scenic locomotive routes through Canada, Ecuador, India, New Zealand, Sweden, and Spain. Wilson follows the inner workings of these unique rail journeys with immersive and in-depth accounts from train drivers, load-masters, head chefs, track inspectors, rail traffic control officers, and passengers. CANADA’S WORST DRIVER – Season premiere Oct. 29 Mondays at 10 p.m. ET / PT Season 14 of perennial viewer favourite CANADA’S WORST DRIVER follows a new group of seven disastrous drivers from across the country. Each nominated by a friend or family member, these truly terrible drivers are put through their paces in a controlled environment and evaluated by a panel of driving experts. Hosted by Andrew Younghusband, each episode features tried-and-tested challenges designed to push contestants to their limits. They must master basic training and more advanced techniques before graduating or they will be named “Canada’s Worst Driver.” ABOVE AND BEYOND: NASA’S JOURNEY TO TOMORROW – Special Saturday, Oct. 13 at 9 p.m. ET / 10 p.m. PT Directed, produced, and narrated by Academy Award®-nominated and Emmy®-winning Rory Kennedy, this documentary feature shines a spotlight on NASA’s historic accomplishments in space, from the moon landing to Mars exploration to journeys to the outer edges of the solar system and beyond. ABOVE AND BEYOND: NASA’S JOURNEY TO TOMORROW also sheds light on the agency’s lesser-known area of focus: the vital role NASA has played in measuring the health of our home planet. As far as NASA may travel, its gaze has always returned to Earth, monitoring our seas and skies, our ice and sands, in an ongoing struggle to protect the planet. HIGHWAY THRU HELL – New episodes Tuesdays at 10 p.m. ET / 10 p.m. PT Featuring stories of remarkable strength and fearless dedication, HIGHWAY THRU HELL chronicles the heroic highway rescue teams who often put their own lives at risk to help keep vital roadways open and communities safe. Dropping everything to respond, it is their duty to remove the often-dangerous cargo, clean up the twisted metal, clear the road, and get traffic rolling again for thousands of drivers. HIGHWAY THRU HELL Season 7 sees series star Jamie Davis make a bold move, turning to vintage machinery to tackle modern-day wrecks. Davis’ team is not only tested by unforgiving weather conditions, but also faced with the challenge of mastering old iron equipment to combat some of the most spectacular wrecks the crew has ever seen. GOLD RUSH – Season premiere Oct. 16 Tuesdays at 9 p.m. ET / 9 p.m. PT In a challenging industry where one wrong move can cost a crew millions of dollars, Season 9 of GOLD RUSH sees miners Parker Schnabel and Todd Hoffman take on even greater risks in hopes of finding more gold than ever before. After the sudden loss of his grandfather, 21-year-old Schnabel returns from a record-breaking season with bittersweet memories and bold moves as he makes the biggest investment in the history of his operation – buying an entirely new state-of-the-art mining technology.  Meanwhile, Hoffman is on a quest for giant nuggets and decides to take his operation to the next level, moving his equipment and headquarters from the Klondike to Oregon. He sets an ambitious 5,000-ounce goal and quickly wonders if his decision was a massive mistake. The question remains: will big risks in search of a GOLD RUSH lead to a larger pay out…or financial ruin? ALASKA: THE LAST FRONTIER – Season premiere Oct. 14 Sundays at 9 p.m. ET / 9 p.m. PT For more than 80 years, Yule Kilcher’s homestead legacy has survived in the Alaskan wilderness on perseverance and commitment to his family. This past year, the Kilchers endured severe weather conditions, damage to the homestead, and unexpected setbacks. With spring around the corner, Season 8 begins with the family gearing up for new opportunities and fresh adventures. After months of darkness, the Kilchers celebrate the warmer weather by exploring remote Alaskan terrains to source different game and learn new homesteading skills. THIS IS A.I. – Special Friday, Oct. 5 at 9 p.m. ET Artificial intelligence (AI) has been characterized as both humanity’s salvation and its potential downfall. But what is the truth behind the hype? One-hour special THIS IS A.I. looks at how AI is changing today’s world, the scientists shaping it, and the lives affected by this nascent technology. ALASKAN BUSH PEOPLE – New episodes Mondays at 8 p.m. ET / 5 p.m. PT The journey off the beaten path continues into the Alaskan wilderness, where a remarkable and highly-resourceful family lives off the grid. Billy Brown, his wife Ami, and their seven grown children – five boys and two girls – live so far removed from civilization that they often go six to nine months of the year without seeing an outsider. Last season, Billy and Ami built their dream home and now with shelter in place, it’s time for the Browns to look toward the future and take life in the bush to the next level. During Season 4, Billy realizes that in order for “Browntown” to thrive, he must give his kids more responsibility in maintaining life at home and stocking up for winter. When an injury brings hardship for the family, it’s time for the ALASKAN BUSH PEOPLE to grow together and for some of the Browns to pick up the slack. Additional Programming Highlights Discovery’s free preview also features all-new episodes of Discovery’s signature series, including MAYDAY (Wednesdays at 8 p.m. ET / 9 p.m. PT), BATTLEBOTS (Mondays at 10 p.m. ET / 7 p.m. PT), SHIFTING GEARS WITH AARON KAUFMAN (Thursdays at 9 p.m. ET / 6 p.m. PT), and TREASURE QUEST: SNAKE ISLAND (Sundays at 8 p.m. ET / 5 p.m. PT). In tandem with the free preview, full past seasons of key Discovery titles are available free on demand through set-top box to Bell, Bell Aliant, Rogers, Telus, Shaw, Shaw Direct, Eastlink, and Cogeco customers until Oct. 23, including:

About Discovery:
With compelling real-life programming that inspires and entertains, Discovery reveals the world in all its wonder, diversity and amazement. Discovery offers a signature mix of adrenaline-charged stories, larger-than-life personalities and vivid imagery for viewers with curious minds. With the best factual programming from Canada and around the world, Discovery captures the excitement of a passion for life – one lived fully and at its most extreme. With exceptional and immersive storytelling, the channel offers in-depth, behind-the-scenes glimpses at the extraordinary people and places that shape our world. Discovery Canada is a joint venture between Bell Media, which is part of BCE Inc. (TSX, NYSE: BCE), Canada’s largest communications company, and Discovery Communications Inc. Find more information and interactive online features at Discovery.ca