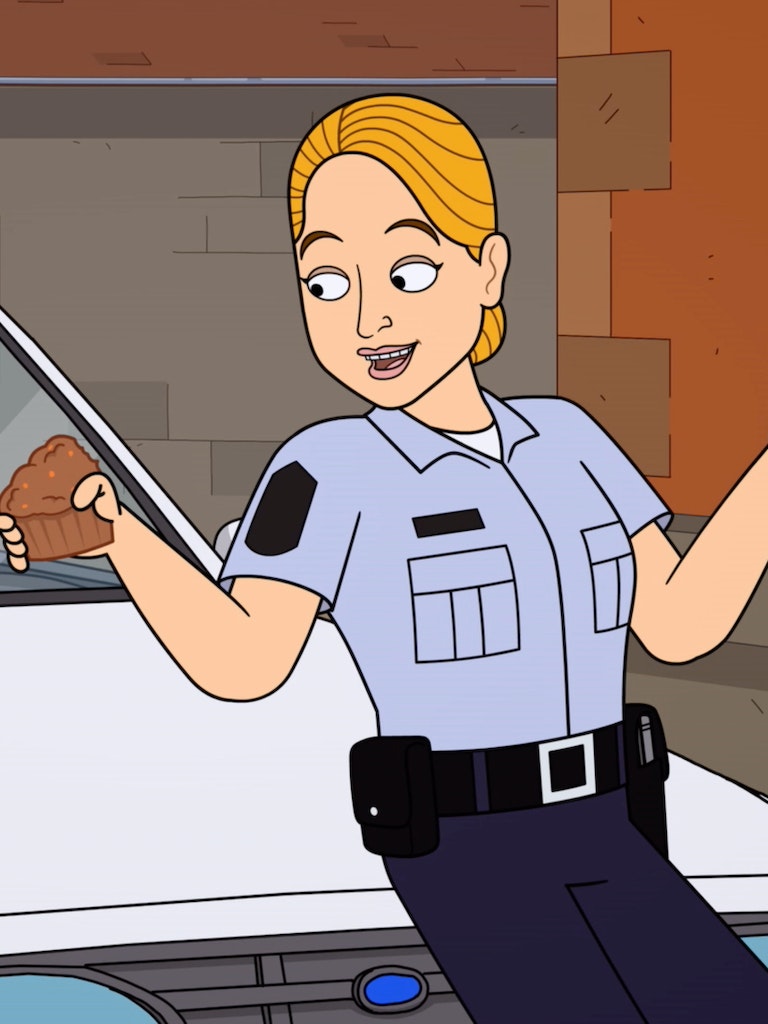 Sometimes when Tara Spencer-Nairn is watching CORNER GAS ANIMATED, a brilliant idea pops into her head.

“I’ll think to myself, ‘This would make a great live-action show,’ ” Spencer-Nairn said with a laugh. “And then I realize, ‘Oh yeah! It was one!’

“Occasionally I’ll forget that it ever was NOT animated,” she continued. “But then again, the live-action show kind of felt animated, too.”

Spencer-Nairn’s reaction speaks to the smoothness of the transition from CORNER GAS, one of the most beloved sitcoms in Canadian TV history, to CORNER GAS ANIMATED, which airs its Season 2 finale, Monday at 8 p.m. ET on The Comedy Network (soon to be CTV Comedy Channel).

“To me, the change always felt organic, but the question was whether fans were going to accept it or not, because people can be diehard,” said Spencer-Nairn, who plays Dog River Police Constable Karen Pelly in both the live-action and animated versions. “But this is where Brent Butt (series creator and star) always seems to nail it. He's very true to the original show. I think that's why it works. You feel as if you’re watching the same show.”

Still, nothing really prepares an actor for seeing an animated version of themselves.

“At first I sort of thought, ‘Well, it looks kind of like me … I guess,’ ” Spencer-Nairn said. “Okay, my face is very angular, and I've got this square jaw line, very serious. I look kind of mean. And initially I was like, 'Does everyone think I'm mean?'

“But you sort of have to accept that this is how people see you, through their eyes,” she added. “Something has to be exaggerated, that’s what animation is, and how it works. I don't know if they've changed me from the first incarnation that I saw, but now when I watch it - and maybe it's just because my voice is also there - I'm like, 'Yeah, that’s me. It looks like me.' ”

The animated version of Karen has caused a bit of confusion for Spencer-Nairn’s four-year-old son, though.

“The first time he saw it, he got all excited,” Spencer-Nairn recalled. “But he was asking, 'Mommy, did you really do that? How was that? Was it fun?' And I'm like, uh … I looked at my husband, and I said, 'Should we be concerned that he's not understanding that I'm not a cartoon? Should I be worried?’ But he just knows my voice, and he wouldn’t understand how my voice would have gotten into that.”

Meanwhile, Spencer-Nairn’s older son, who is seven, seems to be a budding TV critic.

“He’s just so opinionated, sometimes he’ll simply say, 'I didn't think that was funny,’ ” Spencer-Nairn said. “To be fair, he also will tell me when he DOES think something is funny. But it's never me. He’ll say someone else on the show is funny - but I'm not!”

Kevin Newman Steps Down as Host of W5; Evolves Role with CTV News