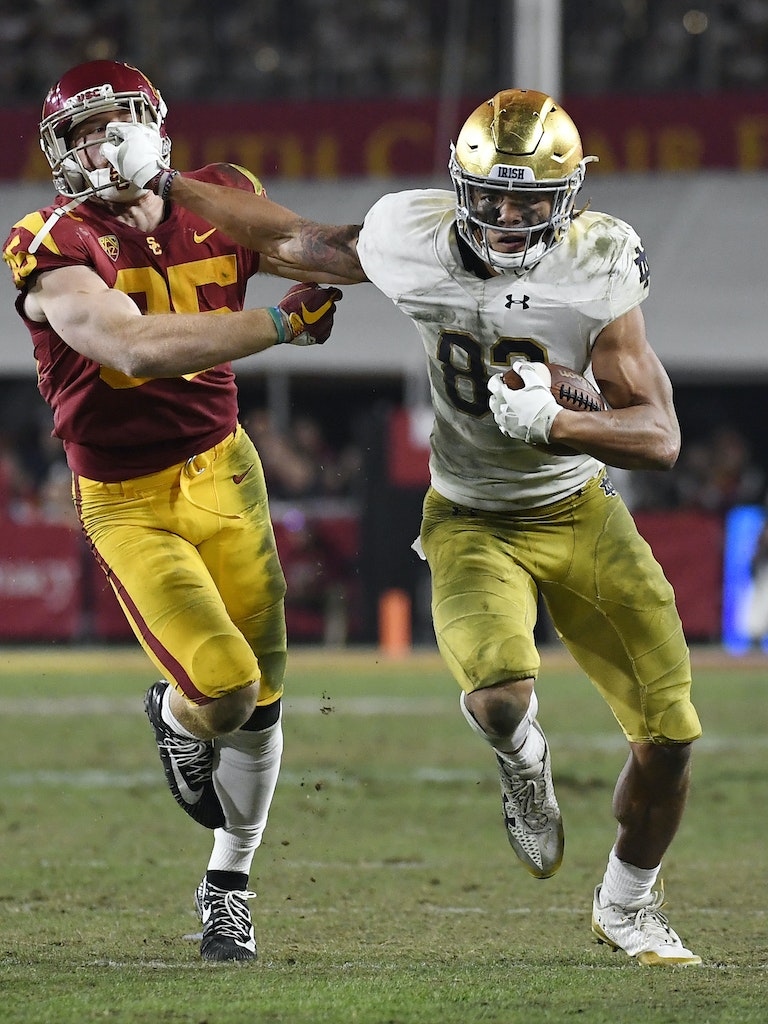 The air is getting cooler, the days shorter, and Canada’s Sports Leader is gearing up for another season on the gridiron. The NCAA FOOTBALL regular season kicks off this weekend on TSN, delivering wide-ranging coverage throughout the season.

We had SPORTSCENTRE reporter Farhan Lalji break down exactly what the upcoming season holds, from Canadians to keep an eye on, to early COLLEGE FOOTBALL PLAYOFF favourites, to the coaches he’d most want to suit up for. Here are Farhan’s Four things you need to know going into the NCAA FOOTBALL season:

1. Canadians Keeping You Captivated
There are a few Canadian exports making a big impact on the field south of the border:

Chase Claypool – Wide Receiver at Notre Dame, from Abbotsford, BC: At close to 6’5” and 225 pounds, Claypool is a dominant force on offense and special teams for the Irish. He is expected to be the team’s number one receiving target and some NFL draft rankings have him going among the top five receivers in next year’s draft.

Nathan Rourke – Quarterback at Ohio, from Oakville, Ont.: Rourke won the Cornish Trophy as the top Canadian in the NCAA for the second straight year and was invited to the Manning Passing Academy this past summer. He has been called the best QB in the Mid-American Conference since Ben Roethlisberger by some and could be a mid-round selection in the NFL Draft next April.

Chuba Hubbard – Running Back at Oklahoma State, from Sherwood Park, Alta.: Enters his sophomore season with the Cowboys as the projected starter after averaging more than 106 yards per game in his four starts last season. Hubbard is considered to be among the fastest running backs in the nation, and with the Cowboys expected to break in a new starting QB in 2019, Hubbard will get plenty of carries.

2. That’s My Quarterback
With the exception of Kyler Murray, the 2019 NFL quarterback draft class lacked top-end talent. That will not be the case this time around! The future of the NFL is in good hands with these special playmakers that will be on display on campuses this fall:

Trevor Lawrence (Clemson): Lawrence led Clemson to a National Championship as a true freshman last season. Many believe the 19-year-old is the best pro prospect ever. He’s not draft eligible until 2021, so he will toy with the ACC and the rest of college football for the next two seasons.

Tua Tagovailoa (Alabama): Tagovailoa won a national title as a freshman. He can beat you with his arm and legs, and is so dynamic, coach Nick Saban felt compelled to modernize his offense last season to take advantage of his unique skills. The “Tua vs. Trevor” Heisman Trophy race will be a major storyline all season. There’s certainly the possibility we’ll see them face off again in the national title game in January.

Justin Herbert (Oregon): He is sure to challenge Tua for the number one pick in the draft in 2020. Herbert is 6’6”, 235 pounds, with a live arm and good athleticism. He could have challenged for the top pick in 2019, but instead opted to return to Oregon for his senior year. His return is the major reason the Ducks are back among the elite teams in the nation.

Jalen Hurts (Oklahoma): Hurts took Alabama to the 2016 national championship game as a true freshman and lost. The following year he was replaced by Tagovailoa in the title game, and then lost the starter’s job for good last season. So he graduated early, transferred to Oklahoma for his final season, and seems to be the perfect fit in Lincoln Riley’s high-octane offense. Can Hurts cap his collegiate career in storybook style by becoming the third straight Heisman winner for the Sooners?

3. Put Me In, Coach!
If I had to turn in my microphone and take the field for a season, I would definitely want to play for one of these coaches:

Dabo Swinney (Clemson): During the CFB Playoffs, Nick Saban is always referred to “Coach Saban,” but Swinney is addressed simply as “Dabo”. The man has taken Clemson from a middling program to the top of the college football world, with two championships in the past three years. He’s done it by keeping the fun in what is otherwise a pressure-packed billion-dollar business. Not to mention, he gives the best quotes in the NCAA.

Dino Babers (Syracuse): These speeches seem to happen every week. Clearly this man is passionate about his players.

4. Pre-Season Playoff Picks
Alabama and Clemson have combined to win the last four National Championships and 11 of the past 12 College Football Playoff games. Will one of them win again? I say no!

Catch all the players, coaches, and teams from across NCAA FOOTBALL in action throughout the season on TSN, beginning this Saturday, Aug. 24 with Miami taking on Florida at 7 p.m. ET on TSN2, the TSN App, and TSN.ca.

Also, football fans can tune in to GRIDIRON NATION, TSN’s weekly program focusing on the Canadian stars of NCAA FOOTBALL. The show keeps fans up-to-date each week throughout the season, and premieres Wednesday, Aug. 28 at 1 p.m. ET on TSN2.