Rocky, sensational, epic and hellishly good – a rock spectacular with global hits by Jim Steinamn, originally performed by Meat Loaf will start in November 2018 – Tickets are on sale on

Oberhausen, 14 June 2018 – it is finally official: BAT OUT OF HELL – The Musical featuring global hits by Jim Steinman will be the next production at the Stage Metronom Theatre, taking the place of Disney’s Musical Tarzan which will close on September 23rd. The German premier of the exceptional rock spectacle by celebrated composer, Jim Steinman, will be held in November 2018. Advance booking for BAT OUT OF HELL – The musical featuring global hits by Jim Steinman, originally performed by Meat Loaf – can be made now. Germany should prepare to be amazed by a grandiose musical that promises to be rocky, sensational, epic and hellishly good, said Jürgen Marx, Area Director for the south/west region at Stage Entertainment: “From November onwards, Oberhausen will become the home of a rock spectacular! Stage Entertainment and the original London producers are bringing the hit show from London to Germany. Oberhausen was simply the perfect location for BAT OUT OF HELL – The Musical. No other theatre measured up to the Stage Metronom Theatre when it came to housing this epic rock hit thanks to its arena-like auditorium. Spectators will experience Jim Steinman’s unmistakable flair with all their senses thanks to the revolutionary stage technology – a production guaranteed to receive a standing ovation.” The music, script and book for BAT OUT OF HELL were all penned by rock legend Jim Steinman, who wrote a large number of the songs performed by global rock star, Meat Loaf, along with the score featured in the musical Dance of the Vampires. His biggest hits include Meat Loaf’s “Bat Out of Hell”, “I’d Do Anything for Love (But I Won’t Do That)” and “You Took the Words Right Out of My Mouth (Hot Summer Night)”. The three BAT OUT OF HELL albums, which provide the songs for the stage version, have sold over 100 million copies since the first release in 1977 and therefore counts as one of the best-selling albums of all time. The stage version of BAT OUT OF HELL perfectly combines the incomparable magic of a musical production together with the immense energy of rock music. In London the show won the victorious award for Best Musical at the London Evening Standard Awards, another milestone in the rock spectacle’s story of success. The show was also nominated for eight amazing awards including Best Musical at the 2018 What’sOnStage Awards, the only awards voted for by the people. An award winning international creative team brings BAT OUT OF HELL - The Musical on stage: direction by Jay Scheib, choreography by Emma Portner, with musical supervision and additional arrangements by Michael Reed, set design by Jon Bausor, costume design by Jon Bausor and Meentje Nielsen, video design by Finn Ross, lighting design by Patrick Woodroffe, sound design by Gareth Owen, orchestration by Steve Sidwell, fight direction by Stuart Boother, German translation book by Roland Schimmelpfenning and songs by Frank Ramond. BAT OUT OF HELL – The Musical takes inspiration from many traditional theatrical stories and love stories, resulting in a vivacious tale set in a city named Obsidian in the year 2030. The legendary rock songs and ballads set the scene for the thrilling love story between Strat, the immortal leader of a young rebel group, and Raven, the beautiful daughter of the tyrannical ruler Falco. Rebellious lovers like Romeo and Juliet or Tony and Maria from West Side Story, and also the eternally young free spirits of Peter Pan and Wendy were inspirations for BAT OUT OF HELL too. Creating this timeless story has been something which composer Jim Steinman has envisaged for a long time. It took over forty years, however, for the idea and the Meat Loaf hit album to be turned into a musical. BAT OUT OF HELL – The Musical, is proud to support the Invictus Games Foundation, the world governing body of the Invictus Games, a global sporting event for wounded, injured and sick servicemen and women, both serving and veterans. Photos for download: www.stage-presse.de 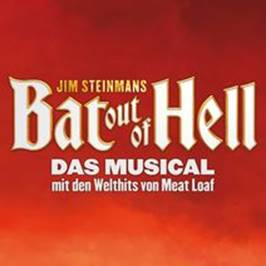 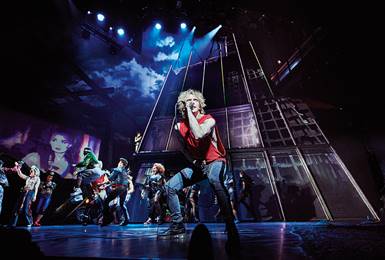 Much Turns Up the Heat this Month with New Series TASKMASTER a...