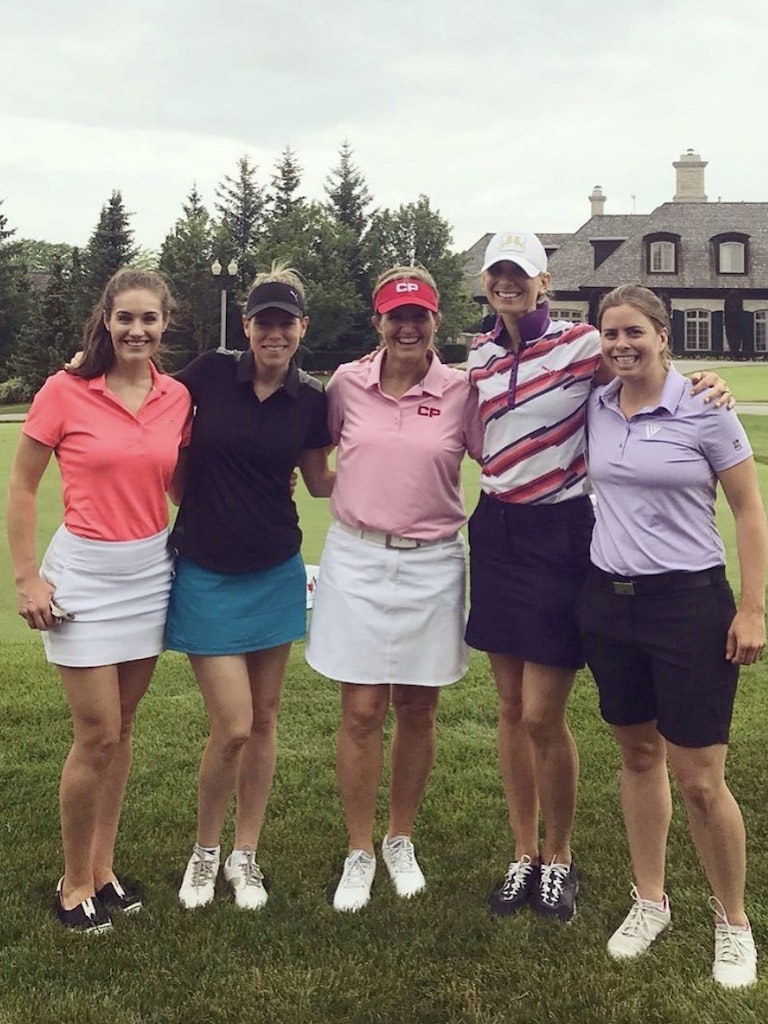 As one of the world’s most passionate golf nations, it’s no surprise that Canada is home to many beautiful and dramatic courses. Next week, the CP CANADIAN WOMEN’S OPEN touches down at one of the country’s very best: Magna Golf Club in Aurora, Ont.

SPORTSCENTRE anchors Kara Wagland and Lindsay Hamilton recently played a round at the Magna, and in advance of Hamilton co-hosting TSN’s live coverage of the CP CANADIAN WOMEN’S OPEN next week, @TSN_PR caught up with them for some tips, their favourite elements of the course, and what to expect from the upcoming event.

What is a tip you’d give to someone playing the course?

Kara Wagland: Magna is a BEAUTIFUL course, my favourite that I’ve played so far. The difficulty of the course is sneaky hard. It’s forgiving off the tee and the fairways can give you a little more confidence than you should have. But if you manage to find the rough, you can pretty much add a stroke automatically to your score, because it tends to be a little long.

I don’t know that I should be giving anyone tips; however, my tip would definitely be to avoid the rough at all costs! Play your tee shot conservatively if you have to and take a second when you can to look around and enjoy how picturesque the course is. The buildings and houses surrounding Magna are all stunning stone buildings.

Lindsay Hamilton: Golf tip: don’t let the bunkers muddle your mind. The course has a number of beautifully contoured bunkers, with holes 13 and 15 standing out in particular.

Overall tip: Soak in the experience. The first word that comes to mind after playing Magna is “exquisite.” The course is pristine and magnificently groomed. Any player will enjoy what is sure to be a terrific round.

LH: This is a one tough one but I have to go with 18. A par 4 (playing 480 yards uphill from the tips), the wide fairway allows you to be aggressive off the tee and attempt to end your day on a strong note. Added bonus: a great view of the magnificent clubhouse as you walk up the hole.

KW: My favourite hole was definitely 14. It’s a par 5 and offers a lot of risk and reward. The dramatic drops in elevation make it a stunning hole to play. There’s this huge hill on the second shot that is definitely where you want to take out your camera and grab a picture if you can!

What can TSN viewers expect from the CP CANADIAN WOMEN’S OPEN?

LH: Loud cheers for Brooke Henderson as she defends her national title!

As spectators, we often have “where were you when…” moments; memories we can recall immediately of a truly amazing play or victory. I think many Canadians can join me in vividly remembering that iconic win for Henderson last year and the emotional interview afterwards as she held back tears while speaking to Bob Weeks.

Henderson shot a final-round 65 and earned a decisive four-stroke win while also becoming the first Canadian woman in 45 years to capture the national title.

Perhaps even more incredible is the momentum she has maintained ever since. In June, Henderson made Canadian golf history, winning the Meijer LPGA Classic, giving her nine career LPGA titles. That sets a Canadian record for most wins on either the PGA or LPGA tours. A reminder – she is only 21 years old!

What are you most looking forward to with the upcoming CP CANADIAN WOMEN’S OPEN?

KW: I’m most looking forward to seeing which holes the players do well on and which ones they struggle with. It’s always very humbling to see a professional make quick work of a hole that you yourself struggled on.  And, of course watching Brooke Henderson do her thing!

Also, it will be so nice to see the club staff get this opportunity. The hospitality we encountered while playing there was second to none.

LH: This year, I’ll have the opportunity to host TSN’s broadcast alongside Bob Weeks, and I’m extremely excited to work on such a prestigious tournament. I’m extremely passionate about covering women’s sports, and there is so much anticipation to see a number of the world’s top players compete at Magna.

TSN gives Canadian golf fans a front-row seat at Magna Golf Club during the 2019 CP CANADIAN WOMEN’S OPEN, beginning Thursday, Aug. 22 at 9:30 a.m. ET through the final round on Sunday, Aug. 25 on TSN, the TSN App, and TSN.ca.