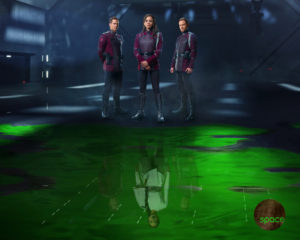 Season 3 of KILLJOYS returns Fridays, at 8 p.m. ET beginning June 30. Season 1 and 2 are available now on CraveTV. For access to the first two episodes of Season 3, the KILLJOYS press kit, new images, and more, click here; and to access high resolution images, bios, and episode synopses throughout the season click here. In the season opener “Boondoggie” (Friday, June 30 at 8 p.m. ET on Space), as war looms over the J Star System, the Quad’s surviving Hullen have gone into hiding, but Dutch and D’avin have a clever plan to draw them out. Far away on the fringes of the J Star System, Johnny begins a desperate hunt of his own for Clara, who is missing in the notorious Rat City. With few clues and less time, John goes deep undercover in the Hackmod (humans with cybernetic implants) world, chasing Clara’s trail with an unlikely new ally.

A Tribe Called Red and Drake Lead the Way as Big Winners at th...