– The Top 16 includes a recording artist, former pro football player, Canadian military veteran, concrete contractor, and a special-needs teacher –
– One home cook will win a $100,000 cash prize and the title of the next Canadian MasterChef –
– New episodes continue Sundays at 7 p.m. ET/PT on CTV –
– CTV.ca/MasterChefCanada will deliver over 80 exclusive videos throughout the season, as well as interviews and recipes fans can only find online –

To tweet this release: http://bmpr.ca/1FoaMDx #MasterChefCanada @MasterChefCDA TORONTO (February 8, 2015) – Tonight’s episode of MASTERCHEF CANADA left mouths watering and only 16 home cooks in the kitchen as judges Michael Bonacini, Alvin Leung, and Claudio Aprile narrowed down the 25 remaining competitors to reveal the Season 2 Top 16. After nine finalists automatically moved into the Top 16, the remaining home cooks faced off in their first Stress Test to further narrow down the field. Representing various regions across the country, the Top 16 includes a dental hygienist, early childhood educator, bartender, retail clerk, and an entrepreneur – all competing for the chance to win the $100,000 cash prize and the chance to be named Canada’s next MasterChef. The MASTERCHEF CANADA competition continues Sundays at 7 p.m. ET/PT on CTV and CTV GO. 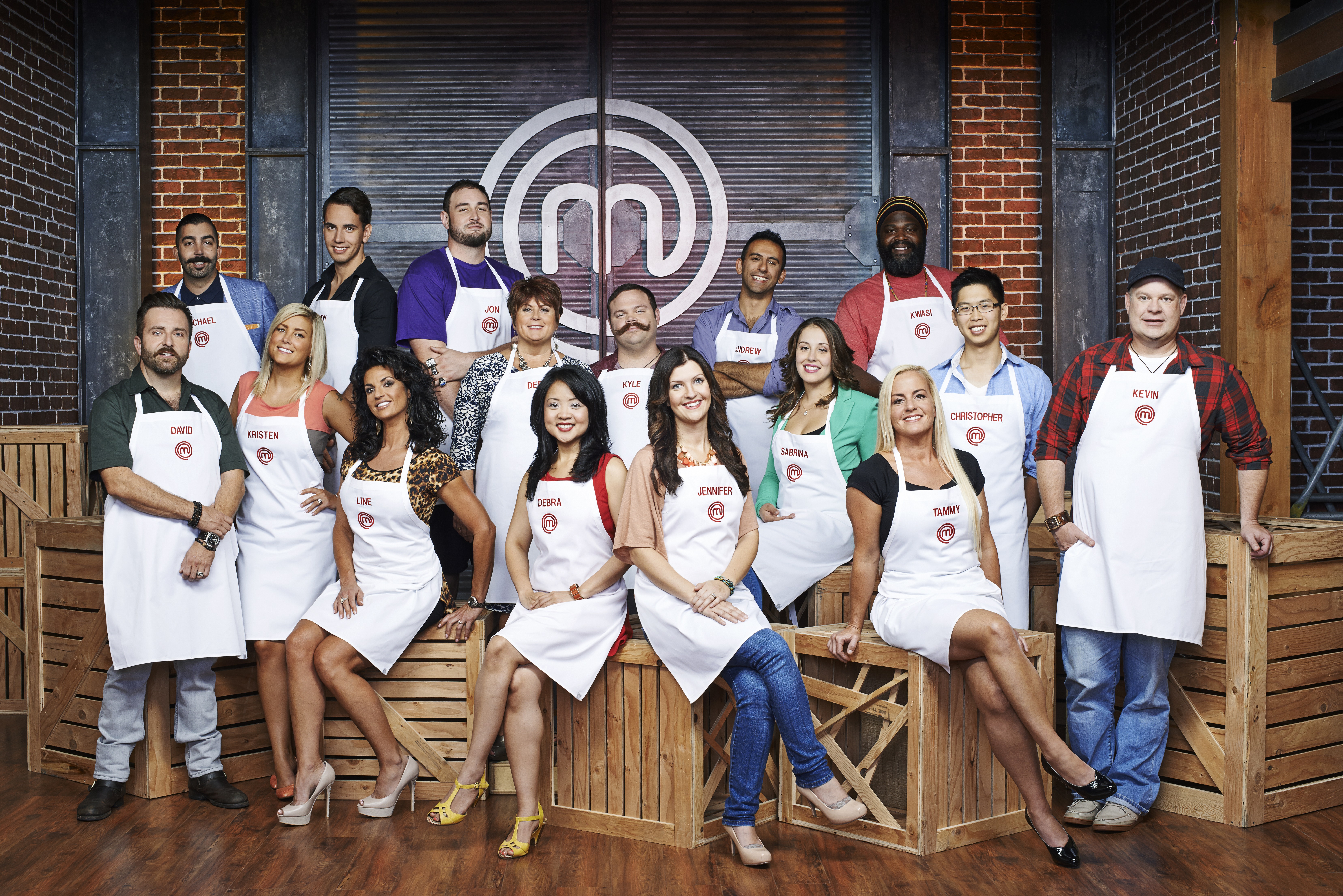 **Media Note** – Download photos of the MASTERCHEF CANADA Top 16 at BellMediaPR.ca and CLICK HERE for the full press kit, including extended Top 16 bios. The Season 2 Top 16 home cooks are: 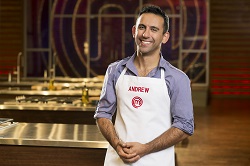 Andrew Al-Khouri – @Zataartheory / Instagram: Zataartheory Audition Dish: Donair Gnocchi Home Town: Cape Breton, N.S. (currently living in Halifax) Food Dream: To open a burger joint in downtown Halifax Andrew is a tax officer who originally learned to cook from his mom, who continues to inspire his dishes. Cooking has become an outlet for Andrew’s creativity, and chicken shawarma, lamb, donair, and gnocchi are only a few of his favourite dishes to make for family and friends. 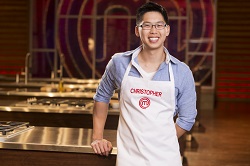 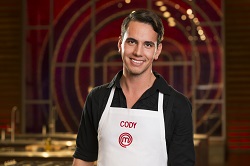 Cody Karey – @codykarey / Instagram: codykarey Audition Dish: Pan-Roasted Trout with "Peas and Carrots" and Bacon Onion Jam Home Town: Fort Saint James, B.C. (currently living in Vancouver) Food Dream: To have his name in lights as a successful restaurateur and musician Helping his parents prepare meals for their large family, and watching a nearly-dangerous amount of cooking shows taught this foodie how to cook. A recording artist, Cody’s enthusiasm and curiosity for food is what really inspires him. Favouring French and Italian cuisine, he loves to cook risotto, fresh pasta, and rich French sauces for large groups of friends. 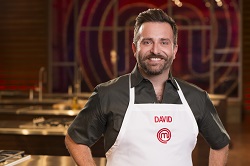 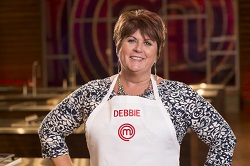 Debbie MacDonald – @debtherookie / Instagram: debtherookie Audition Dish: Ceilidh Trail Crab Cakes with Mango Sauce and Spicy Mustard Sauce Home Town: Port Hood, N.S. Food Dream: To open a seaside bed and breakfast A special-needs teacher, Debbie started cooking at the age of seven. Helping her mother with meals and baking, she quickly fell in love with the culinary world. She is inspired by flavours, local ingredients, and seafood, and her specialty is comfort food with East Coast flair. 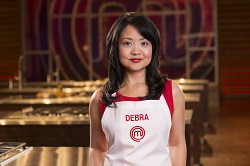 Debra Pangestu – @debrapangestu / Instagram: debrapangestu Audition Dish: Crispy Wild Mushroom Risotto Cake with Seared Scallops and Tomato Basil Coulis Home Town: Originally from the Philippines (currently living in Richmond, B.C.) Food Dream: To write her own food memoir and tell the story of her life through her love of food A public relations officer, Debra was drawn to cooking at a young age. She watched her mum in the kitchen, and was mesmerized. Her mum took note of her fascination with food, and Debra became her helper. For Debra, cooking is an act of love – she cooks because she loves it, and she cooks for people because she loves them. 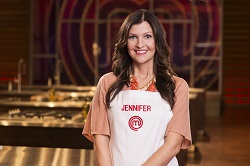 Jennifer Innis – @JenniferInnis / Instagram: jensheninnis Audition Dish: Blueberry and Basil Pie Top Home Town:  Drayton Valley, Alta. (currently living in Vernon, B.C.) Food Dream: To open a grilled cheese food truck A dental hygienist and mom of three, Jennifer credits her cooking talents to TV and her mother. Inspired as a young girl, Jennifer watched her mom create masterpieces in the kitchen. For Jennifer, cooking is a stress reliever, and she loves to spoil her friends and family with food, containing her favourite cooking ingredients – wine, cream, and butter. 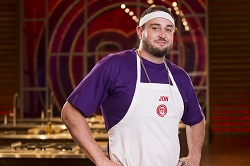 Jon Hameister-Ries – @jonhr67 / Instagram: jonhr67 Audition Dish: Pan-Seared Wagyu Rib-Eye with Grandma Ries' Pierogi Tower and Braised Cabbage Home Town: Edmonton (currently living in Vancouver) Food Dream: To open a rotisserie/smokehouse empire with a goal of owning 20 locations in 10 years Jon is a former pro football player, currently working as a financial advisor. After a football injury left him on bed rest, Jon spent his recovery time watching cooking shows. Inspired by the chefs on television, and both of his grandmas, Jon began experimenting in the kitchen. For Jon, cooking is “go big or go home,” and that means there is never enough meat. 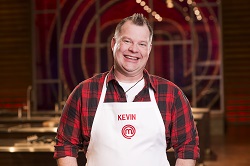 Kevin Gregory – @Bistro113 / Instagram: Smokin_Foodie Audition Dish: Seared Scallops with Roasted Squash Home Town: Annapolis Valley, N.S. (currently living in Fredericton, N.B.) Food Dream: To open a food truck on the East Coast called “Macho Nacho” An applications engineer, Kevin first learned to cook from his mom with her no-fail recipes, but honed his cooking skills in college. To Kevin, food means family and bringing people together is what motivates him to cook, and when he’s not hosting or cooking for his neighbours, he’s bringing in delicious meals for his coworkers. 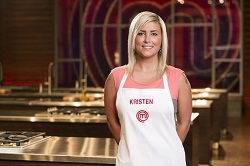 Kristen Dwyer – @kristenstar23 / Instagram: kristendwyer23 Audition Dish: Steak and Herbed Goat Cheese in Homemade Phyllo with Worcestershire Reduction Home Town: Conception Bay South, N.L. Food Dream: To start a food truck franchise in Newfoundland An early childhood educator, Kristen’s interest in cooking began at the age of 15 after her mom was diagnosed with ALS, and she took over cooking for the family. Inspired by strong and bold flavours, Kristen likes to experiment with different taste combinations, cooking for her husband, family, and life-long friends. Her favourite dish is soft pretzels with coarse salt, and a Serrano beer cheese sauce. 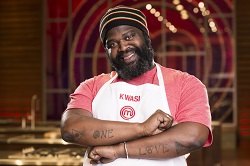 Kwasi Douglas – @splashdafoodgod / Instagram: da_Food_God Audition Dish: Jerk Chicken Pot Pie with Plantain Gems, Tamarind Slaw, and Non-Alcoholic Rastini Home Town: Whitby, Ont. (currently living in Ajax, Ont.) Food Dream: To start a food revolution, giving everyone access to nutritional food and an awareness of where it comes from, how it affects their bodies, and how to prepare it Kwasi is a community facilitator, and is committed to eating deliciously and nutritiously. For him, food is the staff of life. Growing up with home-cooked meals every day, Kwasi learned to cook from his mother, and looks at it as a creative outlet. The father of growing children, Kwasi loves cooking for his family and practices yoga daily. 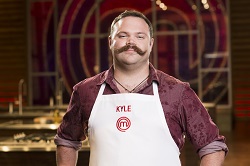 Kyle McKenna – Instagram: chefmustachio Audition Dish: Oyster with Cucumber Wasabi Mignonette, Seared Scallop, Lemon Basil Purée, and Crispy Herbed Potato Chips Home Town: Mermaid, P.E.I. (currently living in Paradise, N.L.) Food Dream: To bring food trucks to downtown St. John’s A bartender, Kyle has travelled around the world and began cooking after being exposed to international flavours and unique cooking techniques. He’s self-taught, and honed his skills working in bars and restaurants. Kyle’s favourite thing to cook is seafood; it reminds him of home, no matter where he is in the world. 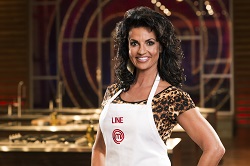 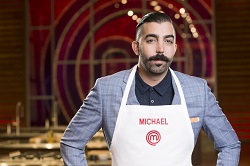 Michael Motamedi – @MichaelBaffi / Instagram: MichaelBaffi Audition Dish: Scallops of the Summer (served with Filet of Tuna, Quinoa, and Radish) Home Town: Los Angeles (currently living in Toronto) Food Dream: To open a restaurant as stylish as he is, where everything from the food to the décor will match his vision of “old world meets new” Michael is an entrepreneur and the co-founder of a men’s fashion company that creates and sells hand-crafted wooden pocket squares. Mostly cooking for himself, Michael also enjoys cooking for his girlfriend and hosting small cocktail parties with friends. For Michael, the need to constantly learn new things is what inspires him, and the feeling of achievement that comes from creating delicious and beautiful meals continually fuels his passion. 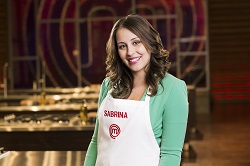 Sabrina Poirier – @Sabrinapmtl / Instagram: Sabrinapmtl Audition Dish: Mushroom and Goat Cheese Medallion in Fresh Tomato and Roasted Eggplant Sauce Home Town: Montréal Food Dream: To open a culinary school for everyday people Sabrina comes from a big Italian family with strong culinary roots. An office manager, Sabrina is self-taught and enjoys creating delicious meals for friends and family. Fish might be her favourite dish to cook, but she’s inspired by the amount of love and hard work that goes into cooking with any ingredient. 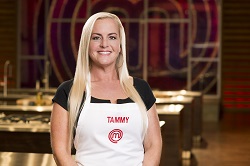 Tammy Wood – @saucysgotgame / Instagram: saucysgotgame Audition Dish: Smoked Elk Carpaccio Home Town: Chilliwack, B.C. (currently living in Agassiz, B.C.) Food Dream: To publish a female-friendly game meat cookbook that focuses on nose to tail cooking A retail clerk, cooking runs through Tammy’s veins. An avid hunter and fisher, Tammy loves to cook with wild game, and learned from her mom, dad, and grandparents. A mother of six, Tammy lost her husband in a workplace accident. She wants to inspire other widows and single mothers by her strength in the face of adversity.   In next week’s episode of MASTERCHEF CANADA, “Constant Cravings” (Sunday, Feb. 15 at 7 p.m. ET/PT), the Top 16 home cooks face their first Mystery Box Challenge in the MASTERCHEF CANADA kitchen, and a classic and highly versatile ingredient sends them in both sweet and savoury directions. The winner of the Mystery Box Challenge must choose which of the judges’ favourite Asian food cravings the other home cooks tackle, and a shocking elimination reminds everyone that they are only as good as their last dish. With exclusive content being revealed throughout the season, CTV.ca/MasterChefCanada features information about the Top 16 and the MASTERCHEF CANADA judges, as well as exclusive interviews, recipes, and more. Throughout the season, over 80 videos will be revealed which will cover everything from how-to’s with the judges, to extended interviews with challenge winners, to exit interviews when home cooks leave the series. Viewers will also again have the opportunity to have their plating skills and impressive dishes judged by Michael Bonacini on Instagram. Each Monday following a new episode of MASTERCHEF CANADA, fans can upload photos of their dishes on Instagram using #MasterChefCanada, and each Friday the winners will be revealed. MASTERCHEF CANADA also streams on demand on CTV GO, and episodes encore following their broadcast premieres Fridays at 9 p.m. ET on M3, Saturdays at 7 p.m. ET/PT on CTV Two, and Sundays at 5 p.m. ET/PT on CTV. Viewers can also enjoy the Season 1 cooking all over again, with the full season of MASTERCHEF CANADA available exclusively on CraveTV. The MASTERCHEF format is represented internationally by Shine International, the sales and distribution arm of Shine Group, and is based on a format originally created by Franc Roddam. MASTERCHEF CANADA is produced by Proper Television in association with CTV. President of Proper Television, Guy O'Sullivan is executive producer, along with Proper's Vice-President and Creative Director, Cathie James. Shine America's Paula Warwick is Creative Consultant. For Bell Media, Tina Apostolopoulos is Production Executive, Factual and Reality, Independent Production. Robin Johnston is Director, Factual and Reality, Independent Production. Corrie Coe is Senior Vice-President, Independent Production. Mike Cosentino is Senior Vice-President, Programming, CTV Networks. Phil King is President - CTV, Sports, and Entertainment Programming. To access the MASTERCHEF CANADA press kit please click HERE.

Without a Trace: Discovery’s MAYDAY Returns March 1 With the ...