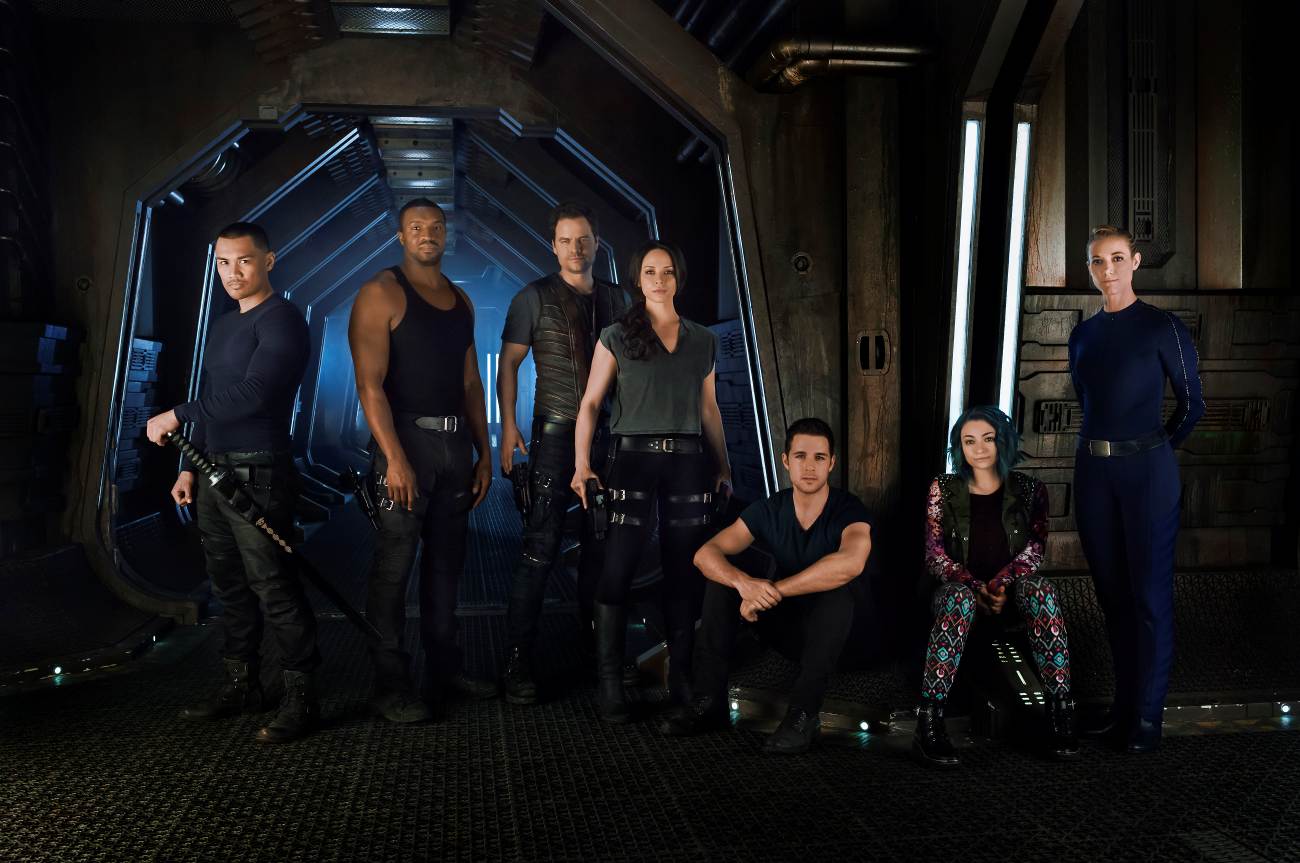 TORONTO (May 20, 2015) – Space takes its rightful place in the far reaches of the galaxy with the premiere of Canadian series, DARK MATTER,  Friday, June 12 at 10 p.m. ET.  Produced by Prodigy Pictures and created by Joseph Mallozzi and Paul Mullie, the one-hour series shot in Toronto follows the crew of a derelict spaceship who awaken from stasis, with no memories of who they are or how they got on board. Facing threats at every turn, they have to work together to survive a voyage charged with vengeance, betrayal, and hidden secrets. DARK MATTER is created by Joseph Mallozzi and Paul Mullie, the team behind the Dark Matter graphic novel and the fan-favourite STARGATE franchise. DARK MATTER’s crew are One (Marc Bendavid, BITTEN), the charming, moral centre of the crew; Two (Melissa O’Neil, Broadway’s Les Misérables), the tough and determined leader of the group; Three (Anthony Lemke, 19-2), the mercenary who looks out for only himself; the calmly ruthless and stoic Four (Alex Mallari Jr., Robocop); Five (Jodelle Ferland, The Cabin in the Woods), the team’s youngest member with a skill for mechanics and a mysterious ability; the low-key Six (Roger Cross, MOTIVE), a man of integrity; and The Android (Zoie Palmer, LOST GIRL), an outsider among the ship’s human passengers yet an indispensable member who possesses control over the ship’s systems. In the premiere episode of DARK MATTER (Friday, June 12 at 10 p.m. ET), the crew searches for answers leading them to a rebellious, off-world mining colony and a shocking revelation. Episode 2 of DARK MATTER (Friday, June 19 at 10 p.m. ET) follows the debut of Space original action adventure series, KILLJOYS, at 9 p.m. ET. Developed by Prodigy Pictures in association with Space, executive producers for DARK MATTER are Jay Firestone (LOST GIRL), creators Joseph Mallozzi and Paul Mullie, and Vanessa Piazza (LOST GIRL). ** Media Note ** Download photography for DARK MATTER at bellmedia.ca/pr/tv/space/

About Space
Space is home to phenomenal programming including imaginative dramas, epic movies, engaging reality series, and the daily entertainment talk show INNERSPACE, the source for all-things genre – all in high definition (HD). Named “Channel of the Year” in 2013 by Playback Magazine, Space is also home to Original Series ORPHAN BLACK and BITTEN. Space content is always available at Space.ca, and on Facebook, @SpaceChannel, and other social media platforms. Space is a division of Bell Media, which is owned by BCE Inc. (TSX, NYSE: BCE), Canada’s largest communications company.