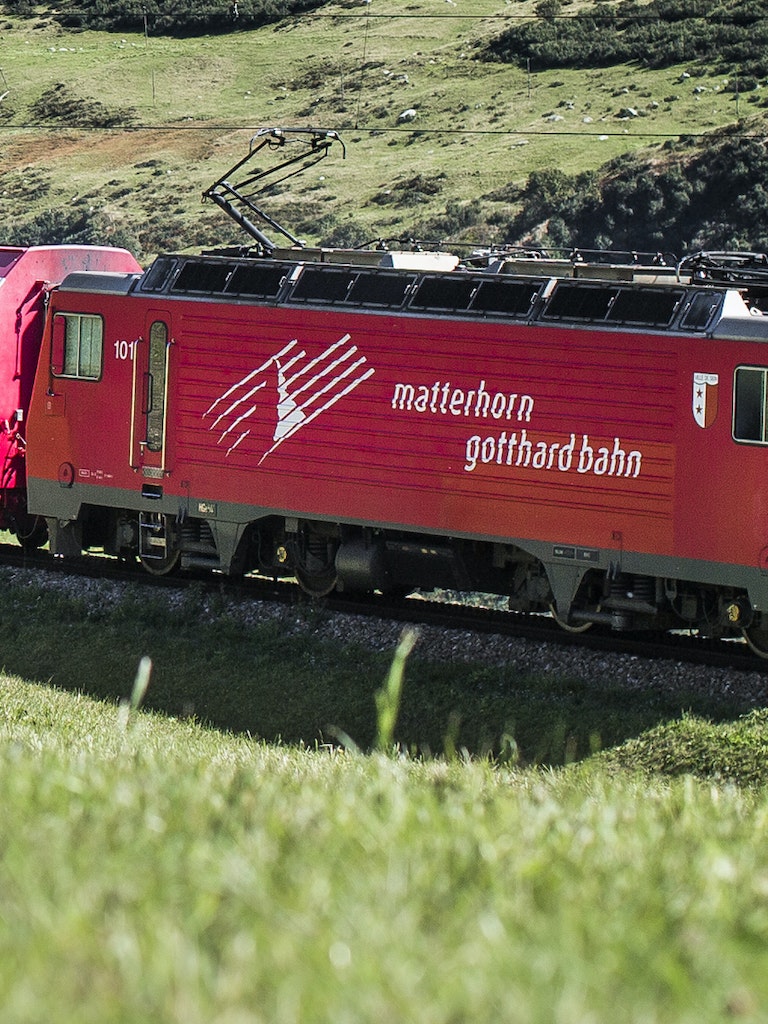 – New series from Exploration Production Inc.’s “MIGHTY” franchise features weekly journeys across the world’s rails, including Canada’s most iconic passenger train, as well as the Swiss Glacier Express and Japan’s high tech bullet train –
– Series to be broadcast around the world in territories including the U.K., Germany, Australia, France, Scandinavia, Eastern Europe, and throughout Asia –

Click HERE for a sneak peek at MIGHTY TRAINS, and HERE to screen “Glacier Express”

TORONTO (September 12, 2016) – Discovery is expanding its “MIGHTY” franchise with the addition of the all-new original in-house series MIGHTY TRAINS, airing Sundays at 7 p.m. ET/4 p.m. PT beginning October 16 on Discovery and the Discovery GO app. In each one-hour episode, host Teddy Wilson brings rail fans around the world on the ride of a lifetime. This uniquely picturesque and informative six-part series casts a lens on the inner workings of some of the world’s most incredible locomotives and their journeys across a wide range of landscapes. Produced by Discovery Canada’s in-house production company, Exploration Production Inc. (EPI), and to air in more than 65 territories around the world including the U.K., Germany, Australia, France, Scandinavia, Eastern Europe, and throughout Asia, the original homegrown series begins with a look at Switzerland’s Glacier Express, followed by Japan’s high-tech “bullet train”. The debut season also includes the story of the spectacular Via Rail passenger train and rail route depicted on the $10 note, The Canadian. “We are excited to introduce our viewers to our latest “MIGHTY” series, MIGHTY TRAINS, which takes viewers on board some of the most unique and interesting trains in the world,  while travelling along some of the most compelling routes,” said Ken MacDonald, Vice-President and General Manager, Discovery Networks. “Long-running franchise originator MIGHTY SHIPS continues to see audience growth and worldwide sales across all platforms, along with popular series’ spin-offs MIGHTY PLANES and MIGHTY CRUISESHIPS.” “MIGHTY TRAINS will keep viewers entranced with every beautiful detail of the world’s most interesting trains and their voyages,” said Kelly McKeown, Director of Production, EPI. “The success of our unique “MIGHTY” format has compelled EPI to branch into rail transport and bring audiences on a new and thoroughly captivating journey.” Wilson, an intrepid traveler and co-host of INNERSPACE on Space, departs on a thrilling ride to explore every detail of incredible rail machines and their often magical routes, from beginning to end. Following the engineers and conductors as they navigate their way through busy rail yards, vie for priority departures, and deal with the unexpected, the series’ maiden voyage features routes in Canada, Japan, Norway, Alaska, Australia, and Switzerland. Train managers, load-masters, head chefs, track inspectors, rail traffic control officers, and passengers are just some of the characters moving the audience through an in-depth journey into the fascinating world of rail travel. Episode highlights from the debut season of MIGHTY TRAINS include: 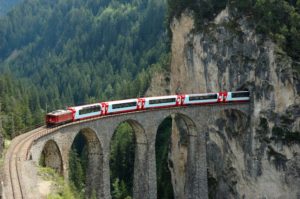 “Glacier Express” Sunday, Oct. 16 at 7 p.m. ET/4 p.m. PT The Glacier Express climbs almost 5 km during its daily eight-hour journey on a route that challenges locomotives to their max, and yet is so beautifully engineered, the railway has been declared a UNESCO Heritage Site – one of only three railroads in the world with that honour. Running between Zermatt, at the foot of the famous Matterhorn, and the ski town of St. Moritz, the Glacier Express travels across the mighty Swiss Alps as it runs from one side of the country to the other. Up to 250,000 people take the train every year, which has been running this route since 1930, yet parts of the rail line have been in operation for more than 125 years. MIGHTY TRAINS explores the challenges of climbing such heights and the railroad that conquers them. The locomotives hauling this train are cutting-edge versions of old technology, using rack and pinion drives to pull the train up the steepest slopes on the route. 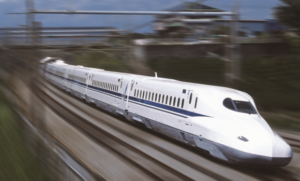 “The Shinkansen” Sunday, Oct. 23 at 7 p.m. ET/4 p.m. PT Japan’s Tokaido Shinkansen, also known as the “bullet train”, is a high-speed commuter train that travels more than 500 km between Tokyo and Osaka in less than 2.5 hours. The Shinkansen operates on its own dedicated railway lines at speeds of up to 285 km/hour while carrying upwards of 400,000 passengers on a daily basis. In operation since 1964, the Shinkansen has carried 5.3 billion people without a single passenger fatality. Given Japan is one of the most earthquake-prone places in the world, the train is equipped with a range of detectors to prevent derailing in the event of seismic activity. Viewers also get a glimpse into the future of SuperConducting Maglev (magnetic levitation) train technology, a new form of rail transportation that Japan is currently testing and developing for deployment in 2027.

“The Canadian” Sunday, Oct. 30 at 7 p.m. ET/4 p.m. PT The Canadian is VIA Rail’s iconic passenger train, travelling between Vancouver’s Central Station and Toronto’s Union Station on four-day, four-night journeys that cater to everyone from high-end vacationers to remote northern Ontario residents hitching a ride to the big city. A team of chefs work in the tiny galley kitchen to prepare fresh gourmet meals for the passengers looking to enjoy the scenery from the dining cars. While on its 4,466 km journey, The Canadian traverses much of the country, through the breathtaking Rocky Mountains, Prairies, boreal forest, and along the pristine lakes of Northern Ontario. MIGHTY TRAINS is produced by Exploration Production Inc. (EPI) in association with Discovery Canada. Gemini-winner Kathryn Oughtred is the Executive Producer. Kelly McKeown is Director of Production. Nanci MacLean is Vice-President, Bell Media Production. Ken MacDonald is Vice-President and General Manager, Discovery Networks. Tracey Pearce is President, Distribution and Pay, Bell Media. Randy Lennox is President, Broadcasting and Content, Bell Media.

About EPI:
Discovery Canada’s in-house production company, Exploration Production Inc. (EPI), is a multi-award-winning producer of ambitious, original, entertaining factual documentaries and series, for both Discovery and other international broadcasters. By the end of 2016, EPI will have delivered more than 3,000 hours of television programming in the form of a daily science magazine show, series, and specials. EPI programming has been broadcast in more than 150 countries, in two-dozen languages, to potential viewing audiences of more than 600 million conventional, cable and satellite subscribers. EPI is a wholly-owned subsidiary of Discovery Canada, a joint-venture between Bell Media (Canada) and Discovery Communications Inc. Kelly McKeown is Director of Production, EPI/Executive Producer DAILY PLANET. Nanci MacLean is Vice-President, Bell Media Production. Randy Lennox is President, Broadcasting and Content. Visit Exploration.ca for more information.

About Discovery:
With compelling real-life programming that inspires and entertains, Discovery reveals the world in all its wonder, diversity and amazement. Discovery ranks as the #1 Canadian entertainment specialty network among total viewers and adult demos. Discovery offers a signature mix of adrenaline-charged stories, larger-than-life personalities and vivid imagery for viewers with curious minds. With the best non-fiction programming from Canada and around the world, Discovery captures the excitement of a passion for life – one lived fully and at its most extreme. With exceptional and immersive storytelling, the channel offers in-depth, behind-the-scenes glimpses at the extraordinary people and places that shape our world. Launched in Canada in 1995, Discovery is now available in more than eight million Canadian homes. Discovery Canada is a joint venture between Bell Media, which is owned by BCE Inc. (TSX, NYSE: BCE), Canada’s largest communications company, and Discovery Communications Inc. Find more information and interactive online features at Discovery.ca.