– PRETTY LITTLE LIARS returns with all-new episodes beginning Tuesday, June 2 at 8 p.m. ET –
– Leading up to the Season 6 premiere, viewers can catch up online at M3TV.ca and with a special Season 5B marathon on Sunday, May 31 beginning at 8 a.m. ET –

“The series is a spooky youth-targeted thriller, with twists and turns and mystery and danger and forbidden love and a hot cast.” – Bill Harris, Postmedia Network To tweet this release: http://bmpr.ca/1AZI88F TORONTO (May 14, 2015) – The future looks bleak as the Liars remain stuck in a twisted web of games in the Season 6 premiere of PRETTY LITTLE LIARS, airing Tuesday, June 2 at 8 p.m. ET on M3. Season 6 of the one-hour drama begins moments after the Season 5 finale that found Aria (Lucy Hale, PRIVILEGED), Emily (Shay Mitchell, HEY TUCKER!), Hanna (Ashley Benson, Spring Breakers), Mona (Janel Parrish, Bratz), and Spencer (Troian Bellisario, LAUREN) trapped outside the dollhouse where their tormentor, a mysterious man named Charles, has been keeping them – with nowhere to run. M3 gives viewers a chance to catch up on PRETTY LITTLE LIARS online at M3TV.ca, and with a special Season 5B marathon on Sunday, May 31 beginning at 8 a.m. ET. 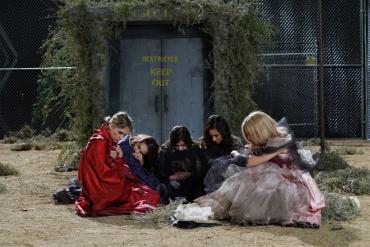