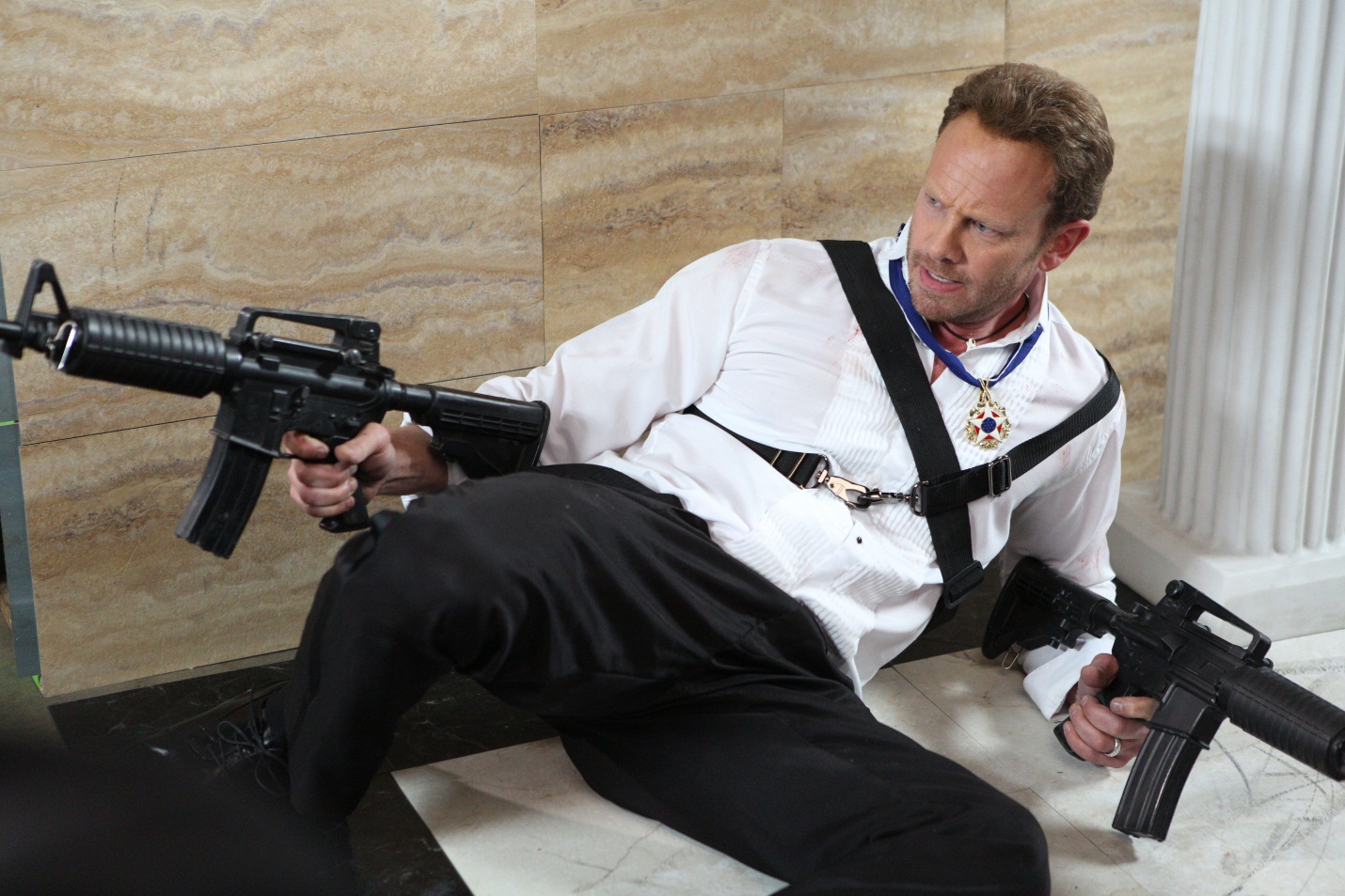 The world’s fearless leader Ian Ziering returns to save the day in SHARKNADO 3: OH HELL NO!

TORONTO (July 6, 2015) – It’s not officially summer in the genre world until a Sharknado hits. In a newly released forecast, Canada can expect SHARKNADO 3: OH HELL NO! to typhoon over Space, Wednesday, July 22 at 9 p.m. ET, it was confirmed today. The two-hour, fin-tastic TV movie sees the return of Ian Ziering as the shark-slaying Finley “Fin” Shepard, (BEVERLY HILLS 90210), Tara Reid as April Wexler (American Pie), and Cassie Scerbo as Nova Clarke (MAKE IT OR BREAK IT), as they battle a massive Sharknado that feasts on the East Coast, causing mass destruction in Washington, D.C. before roaring down the Eastern Seaboard and into Florida. SHARKNADO 3: OH HELL NO! also features more celebrity appearances than you can shake a shark at including David Hasselhoff as Fin’s father Gil; Bo Derek (Tommy Boy) as April’s mother, May; Frankie Muniz (MALCOLM IN THE MIDDLE) as Nova’s friend and mechanic Lucas Stevens; Mark Cuban as the President of the United States; and Ann Coulter as the Vice President of the United States. Also diving into the Sharknado are WWE wrestler Chris Jericho as an amusement park ride attendant named Bruce; famed television host Jerry Springer; pop duo Jedward as tourists; Ray J (MOESHA) as NASA tech Tom Major; and former *NSync band member Chris Kirkpatrick as a lifeguard. Rounding out the guest cameos are illusionists Penn & Teller as retired NASA Lieutenant Colonel Stylo and Major Caissier; Holly Madison (THE GIRLS NEXT DOOR) as Lieutenant Harrison; as well as R&B singer Ne-Yo, Lou Ferrigno (THE INCREDIBLE HULK), and Grant Imahara (MYTHBUSTERS) as Secret Service agents. ** Media Note ** Download photography for SHARKNADO 3: OH HELL NO! at bellmedia.ca/pr/tv/space/ Last summer, the sequel to the epic franchise, SHARKNADO 2: THE SECOND ONE, reeled in 463,000 viewers for its premiere making it the #1 entertainment specialty program of the day among total viewers and the key A25-54 and A18-49 demos. The two-hour sequel was watched by more than 1.3 million unique viewers, and peaked with 614,000 viewers. On Twitter, the hashtag #Sharknado2 reached 10 million estimated impressions in Canada, making Sharknado the #1 trending topic in Canada with five of the Top 10 topics. For viewers who have yet to get swept up, Space is airing the trilogy in its entirety beginning Saturday, July 25 at 2 p.m. ET with the movie that started it all, SHARKNADO. Both SHARKNADO and SHARKNADO 2: THE SECOND ONE are currently streaming on CraveTV. Full programming details below. SHARKNADO-A-THON SHARKNADO Saturday, July 25 at 2 p.m. ET on Space When a freak hurricane swamps Los Angeles, thousands of sharks terrorize the waterlogged populace. Then, when high-speed winds form tornadoes in the desert, nature’s deadliest killer rules the water, land, and air. SHARKNADO 2: THE NEXT ONE Saturday, July 25 at 4 p.m. ET on Space A freak weather system turns its deadly fury on New York City, unleashing a Sharknado on the population and its most cherished iconic sites – and only Fin (Ziering) and April (Reid) can save the Big Apple. SHARKNADO 3: OH HELL NO! Saturday, July 25 at 6 p.m. ET on Space A Sharknado causes mass destruction in Washington, D.C. before roaring down the Eastern Seaboard and into Florida.