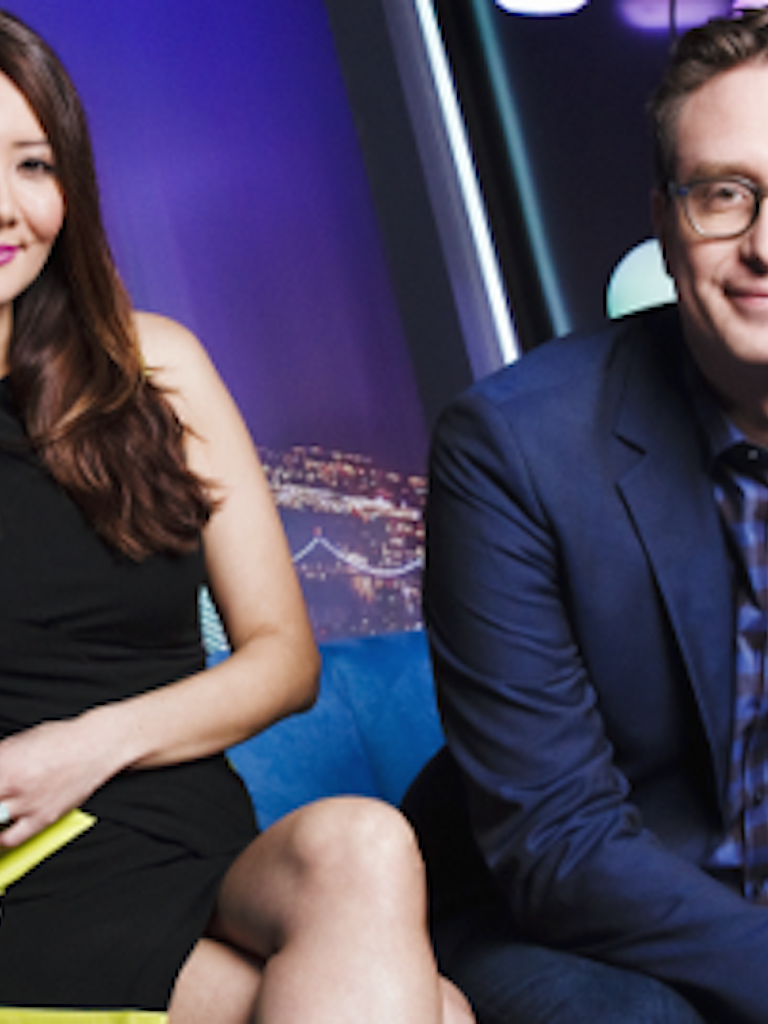 TORONTO (September 29, 2016) – Unflinchingly casting a lens on some of the biggest risks ever caugtht on film, Discovery’s flagship magazine program DAILY PLANET  brings viewers heart-pumping, spine-tingling, and utterly mind-blowing daredevil adventures from around the world with “Adrenaline Junkies Week”, Monday, Oct. 3 through Friday, Oct. 7 at 7 p.m. ET/4 p.m. PT exclusively on Discovery. Throughout “Adrenaline Junkies Week”, co-hosts Ziya Tong and Dan Riskin embrace the spirits of thrill-seeking daredevils everywhere, providing viewers a rare and sometimes terrifying glimpse into the minds of some of the world’s most intrepid risk-takers. From paddling alongside Alison Teal as she feels “boiled alive” while surfing volcanic waters to an epic 11-hour flight with extreme hang glider Jonny Durand - and even the unique brand of insanity known as horseboarding - DAILY PLANET  features the world’s most adrenaline-pumping adventures that promises to keep pulses racing!

Highlights from DAILY PLANET’s “Adrenaline Junkies Week” include: “Cheese Roll” Are people willing to risk limbs and sanity for a wheel of cheese? Why, absolutely!  In Cooper’s Hill in the U.K., dozens of participants chase a precious wheel of double Gloucester down a hill so steep that in a matter of seconds, the cheese hits speeds of more than 100 km per hour. DAILY PLANET follows champion cheese chaser, Chris Anderson, as he competes for his 17th title…despite personally hating the dairy delicacy. “Horseboarding” Not to be confused with the act of housing horses, this is a crazy new beach sport invented by the Dutch. Horseboarding is a combination of horseback riding and wakeboarding, putting riders at the mercy of horses towing them through the surf or turf. Specially engineered ramps allow boarders to do tricks and impress the judges. It’s only the second ever horseboarding world championship, and DAILY PLANET is along for the ride. “Hang-Glider Record” In 2012, hang gliders Jonny Durand and Dustin Martin flew 11 hours over Texas alongside one another. Both were trying to break a world record for the longest open-distance flight, but only Martin succeeded. Durand came up a few kilometres short that day but is back at his old stomping ground for another shot at the title. DAILY PLANET joins Durand as he plans and embarks on a 764 km glide across Texas, from Zapata south to Lorenzo. “Sidecar Motorcross” Sidecar racing uses three-wheeled motorcycles that can hit speeds of 260 km per hour.  It’s messy, dangerous, and takes a lot of technique to make it through the race. DAILY PLANET climbs on board with Daniel Willemsen, the world’s best sidecar cross racer, as he competes against the best. “Lava Paddler” Alison Teal says surfing the waters near Hawaii’s Kilauea volcano is like being “boiled alive.” But for this adventurer, hailed as the female Indiana Jones, it’s just one more item to cross off her bucket list. DAILY PLANET catches up with Teal to find out what keeps her traveling the world, looking into the face of danger on a regular basis, and coming back for more. Subscribers can access live streaming of DAILY PLANET through the Discovery GO app, and catch up on past episodes on demand on the Discovery GO app and at Discovery.ca.

About Discovery:
With compelling real-life programming that inspires and entertains, Discovery reveals the world in all its wonder, diversity and amazement. Discovery ranks as the #1 Canadian entertainment specialty network among total viewers and key adult demos. Discovery offers a signature mix of adrenaline-charged stories, larger-than-life personalities and vivid imagery for viewers with curious minds. With the best non-fiction programming from Canada and around the world, Discovery captures the excitement of a passion for life – one lived fully and at its most extreme. With exceptional and immersive storytelling, the channel offers in-depth, behind-the-scenes glimpses at the extraordinary people and places that shape our world. Launched in Canada in 1995, Discovery is now available in more than eight million Canadian homes. Discovery Canada is a joint venture between Bell Media, which is owned by BCE Inc. (TSX, NYSE: BCE), Canada’s largest communications company, and Discovery Communications Inc. Find more information and interactive online features at Discovery.ca.