TORONTO (April 8, 2016) – With five weeks of data now available from Numeris for the Spring Television Season, CTV is once again flying high with a must-see schedule of new and returning hit series. With CRIMINAL MINDS: BEYOND BORDERS, LUCIFER, and DC’s LEGENDS OF TOMORROW, CTV has the Top 4 new mid-season series among all key demos, and is home to eight of the Top 10 programs overall in all key demos. The network has more Top 10 and Top 20 programs than all other networks combined with total viewers and all key demos, and is #1 in primetime six out of seven nights among all key demos. Among CTV’s mid-season hits are LUCIFER – which is one of the Top 10 most-watched programs overall with 1.8 million viewers – and CRIMINAL MINDS: BEYOND BORDERS, which is the second most-watched program currently on television with 2.5 million viewers, behind favourite THE BIG BANG THEORY. In its new 10 p.m. timeslot this spring, BLINDSPOT is also one of Canada’s Top 10 most-watched series with total viewers and in all key demos – as is the FBI drama QUANTICO. The debut episode of CTV’s new cat-and-mouse thriller THE CATCH also ranks in the Top 10 new programs this spring with 1.2 million viewers. CTV is also home to successful sophomore series this spring with hits like HOW TO GET AWAY WITH MURDER and GOTHAM, both ranking in the Top 20 with all key demos, with 1.2 million and 1.4 million viewers respectively. The network’s returning stable of hit series including CRIMINAL MINDS, GREY’S ANATOMY, BLUE BLOODS, MARVEL AGENTS OF S.H.I.E.L.D., and THE AMAZING RACE also rank in the Top 20 most-watched programs this spring. On the Canadian front, Season 3 of CTV’s original hit series MASTERCHEF CANADA is also off to a strong start. Currently averaging 1.5 million viewers on CTV, MASTERCHEF CANADA is the #1 Canadian program with total viewers, ranking in the Top 20 with all key demos and total viewers. Meanwhile, the final season of MOTIVE premiered with 1.3 million viewers on CTV. New episodes of both series continue throughout spring with MASTERCHEF CANADA airing Sundays at 7 p.m. ET/PT and MOTIVE airing Tuesdays at 10 p.m. ET/PT on CTV. “Building on a successful fall schedule, CTV’s balanced spring lineup of established hits, fan favourites, and robust new series are clearly resonating with Canadian viewers,” said Mike Cosentino, Senior Vice-President, Programming, CTV Networks and CraveTV. “The combined strengths of these series once again allows the network to deliver viewers and advertisers Canada’s top-rated schedule.” Broadcast year to date, CTV’s #1 schedule has been bolstered by the addition of strong new series, making it home to seven of Canada’s Top 10 new programs in total viewers with the Top 5 new programs overall with total viewers and all key demos. CTV’s QUANTICO, CODE BLACK, and DC’s LEGENDS OF TOMORROW each rank in the Top 10 with all key demos and total viewers. Meanwhile, THE X-FILES remains the #1 new program of the 2015-16 season with total viewers and all key demos. CTV’s mid-season continues with THE ODD COUPLE joining the schedule Thursdays at 8:30 p.m. ET/PT beginning April 7, while viewers can still enjoy episodes of new and returning favourites. Viewers can catch up on full episodes of CTV series live and on demand on the CTV GO app and at CTV.ca (visit CTV.ca to confirm local broadcast times). 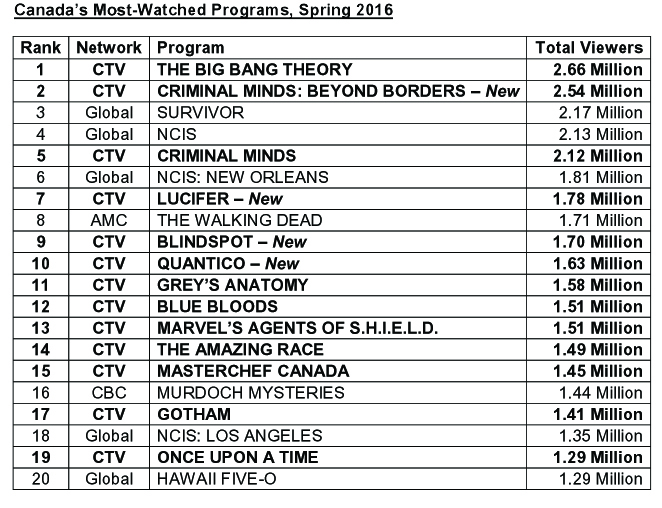 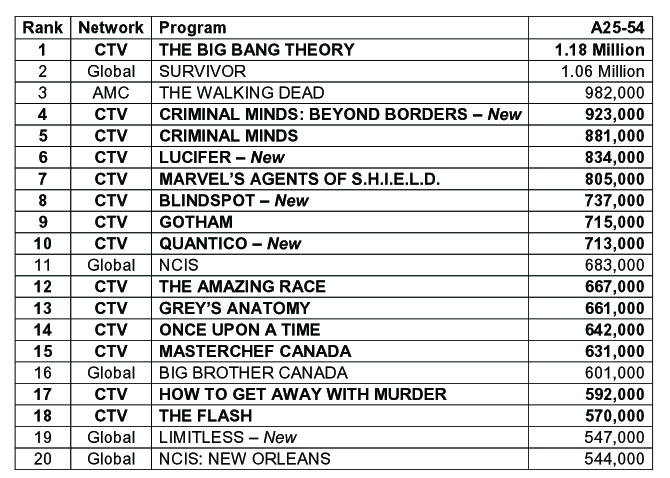 About CTV
CTV is Canada’s #1 private broadcaster. Featuring a wide range of quality news, sports, information, and entertainment programming, CTV has been Canada’s most-watched television network for the past 14 years in a row. CTV is a division of Bell Media, Canada’s premier multimedia company with leading assets in television, radio, digital, and Out-of-Home. Bell Media is owned by BCE Inc. (TSX, NYSE: BCE), Canada’s largest communications company. More information about CTV can be found on the network’s website at CTV.ca.