Go To The News Page
EDMONTON (February 12, 2016) – CTV Edmonton announced today that Reporter Dan Grummett will be joined by Shanelle Kaul to become co-anchors of the weekend edition of CTV NEWS AT SIX beginning this Saturday, Feb. 13. A well-known face to viewers across the region, Grummett now expands upon his current duties as Reporter for CTV News Edmonton with this appointment. Kaul, who most recently anchored Global Regina’s morning program, will also complement her new co-anchor role with reporting for CTV News Edmonton. 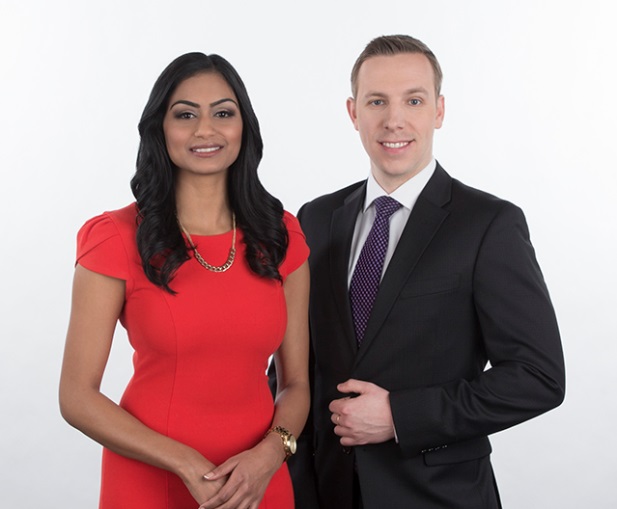 “As seasoned reporters who are comfortable and experienced breaking news live on air, online, and on social media, Dan and Shanelle make a fantastic team,” said Dan Kobe, Director, News and Public Affairs, CTV Edmonton “We are delighted to welcome Shanelle to the CTV Edmonton family, and look forward to having our new weekend co-anchor team uphold the standard of excellence our viewers trust and rely on.” “I’m so excited to be joining the CTV News family, and to be working alongside Dan,” said Kaul. “I look forward to serving viewers across the region. Edmontonians have been incredibly friendly and welcoming! And as a runner, I’ve heard a lot about the river valley and I can’t wait to try some of the trails.” Kaul brings years of newsroom experience both from Regina and Toronto. Most recently, she held the position of Morning News Anchor with Global Regina, following her move from Toronto to Saskatchewan in 2012. Growing up in Toronto, the Ryerson University journalism graduate kicked off her broadcast career as a reporter at Rogers Television in 2010, later moving on to Bell Media’s Business News Network (BNN) as a broadcast associate. Hailing from Saskatoon, Grummett joined CTV Edmonton in September 2013 following a stint on-air in Winnipeg. Since then, he has become an integral part of the CTV Edmonton family, serving as General Assignment Reporter and occasional Anchor. Throughout his career, Grummett has covered local stories that matter to the community, including a plane crash in a Saskatoon neighbourhood, a massive fuel plant explosion in Winnipeg, and most recently, the collapse of an arena roof in Drayton Valley. “I’m looking forward to working with Shanelle to bring Edmontonians the news they need to know each and every weekend,” said Grummett.

CTV News is Canada’s most-watched news organization both locally and nationally, and has a network of national, international, and local news operations. CTV News operations include CTV NEWS CHANNEL, BNN – Business News Network, CP24, and information programming, including CTV NATIONAL NEWS WITH LISA LAFLAMME, CTV NATIONAL NEWS WITH SANDIE RINALDO, W5, POWER PLAY, and QUESTION PERIOD. Flagship news sites include CTVNEWS.ca, as well as CP24.com and BNN.ca, and are complemented by the all-new CTV News GO and CP24 GO apps, which provide a direct connection to Canada’s most trusted news anytime and anywhere.  With a perspective that is distinctly Canadian, CTV News brings Canadians the international and domestic news stories of the day and is the #1 news organization in Canada.