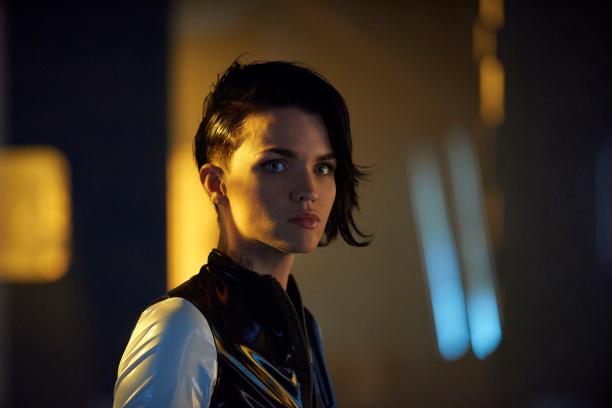 Ruby Rose stars as the mysterious Wendy, in this Friday’s episode of DARK MATTER

TORONTO (July 21, 2015) – Space is experiencing a supernatural high this summer after wrapping up its most-watched June since 2010 for total viewers, climbing four spots to now rank #1 among Canadian specialty channels in its key A25-54 demo. Fueling its meteoric rise are the smash hit intergalactic thrillers DARK MATTER and Space original series KILLJOYS. Since its debut in June, KILLJOYS has delivered an average audience of 386,000 viewers, quadrupling its timeslot audience over last year. Airing immediately after KILLJOYS, sci-fi thriller DARK MATTER is claiming an average audience of 489,000 viewers, with Episodes 3 and 4 tipping over half a million viewers. Currently, DARK MATTER ranks as the #2 program on Space for A25-54, behind global genre heavy-weight, DOCTOR WHO. In their respective Friday at 9 p.m. ET (KILLJOYS) and 10 p.m. ET (DARK MATTER) timeslots, Space ranks as the #1 entertainment specialty network for total viewers, and in the 25-54, 18-49, and 18-34 demos. Continuing to engage genre fans is Space’s flagship daily series INNERSPACE, which now reaches more than 1 million viewers each week. During its weekday 6-6:30 p.m. ET timeslot, Space ranks as the #2 entertainment specialty network for A25-54. In the upcoming episode of KILLJOYS, “One Blood” (Friday, July 24 at 9 p.m. ET), top Killjoys from around the Quad are pitted against one another in a race to find Big Joe, a legendary Killjoy gone rogue. Khlyen uses Dutch to find Big Joe for his own purposes, forcing John and D’avin to team up with an old nemesis. In the upcoming episode of DARK MATTER, “Episode 7” (Friday, July 24 at 10 p.m. ET), the crew finally gains access to the secret room in the ship’s underbelly and among the items they find inside are a sunny android named Wendy (Ruby Rose, ORANGE IS THE NEW BLACK) and a desperately ill woman (Natalie Brown, BITTEN) in stasis.  Wendy, it turns out, is an entertainment model android who quickly wins over the affections of the entire crew - much to our more practical Android’s chagrin.  Meanwhile, Sarah, the woman in stasis, awakens and reveals a connection to the ship’s resident bad boy, THREE. Hosted by Ajay Fry, Morgan Hoffman and Teddy Wilson, Space's flagship daily series INNERSPACE covers film, television, video games, technology, comic books, gadgets, and all things genre. In the next few weeks, fans can look forward to INNERSPACE’s in-depth coverage of Canada’s largest genre convention FAN EXPO Canada™, and the much-anticipated lead-up special to Season 9 of DOCTOR WHO, premiering September 19 exclusively on Space.

Space is home to phenomenal programming including imaginative dramas, epic movies, engaging reality series, and the daily entertainment talk show INNERSPACE, the source for all-things genre, and Space original series after shows, AFTER THE BLACK and AFTERBITE. Named “Channel of the Year” in 2013 by Playback Magazine, Space is also home to original series ORPHAN BLACK, BITTEN and sci-fi drama, KILLJOYS. Space content is always available at Space.ca, and on Facebook, @SpaceChannel, and other social media platforms. Space is a division of Bell Media, which is owned by BCE Inc. (TSX, NYSE: BCE), Canada’s largest communications company.

TSN Delivers Expanded Early Round Coverage from the RBC CANADI...