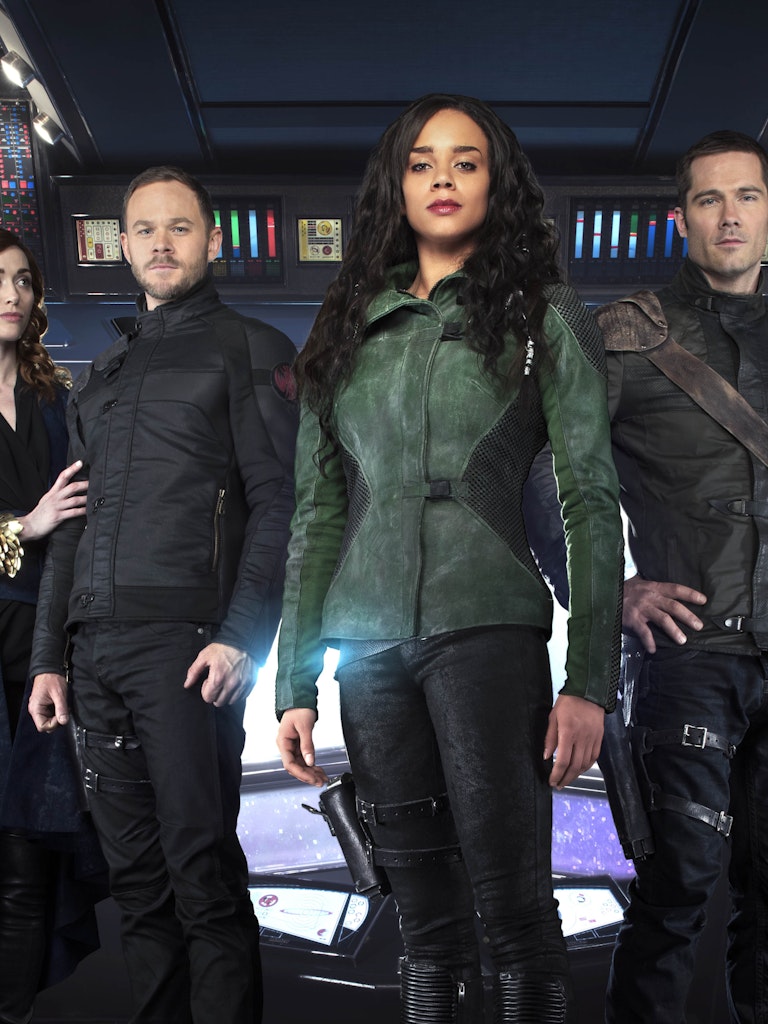 "Praise the trees, Killjoys is back! Sass, action, spaceships, green s***, all of it! And better than ever."  – threeifbyspace.net

TORONTO (September 1, 2016) – A day before the Season 2 finale and hours before a cast appearance at Canada’s largest genre convention Fan Expo, Space confirmed today that it has renewed its most-watched original series ever, KILLJOYS, committing to an additional 10, one-hour episodes. Season 3 begins production in Toronto this winter, and is expected to debut as part of Space’s popular summer lineup in 2017. Created by showrunner Michelle Lovretta and produced by Temple Street in association with Space and Syfy, KILLJOYS follows a trio of reclamation agents - or “Killjoys” - as they get pulled further into political turmoil and the deepening mystery surrounding the Quad system, despite their vow to never take sides. Season 3 of the genre series sees the return of  Hannah John-Kamen as Dutch, a stout-hearted bounty hunter with a fierce dedication to her Killjoy family, and on a quest to solve the mystery of her own identity; Aaron Ashmore as her loyal partner John, the witty tech wizard with a vulnerable heart; and Luke MacFarlane as D’avin, a born soldier who’s tactical skills and loyalty are as strong as his jawline. “KILLJOYS is one of Space's cornerstone programs and we're thrilled to deliver a third season to the summer schedule,” said Mike Cosentino, Senior Vice-President, CTV and Specialty. “We're looking forward to the expanding the universe with more engaging stories, characters, and action." “We join fans worldwide in the excitement of knowing Dutch's, John's and D’avin’s journey will continue for another season,” said David Fortier and Ivan Schneeberg, Executive Producers of KILLJOYS and Co-Presidents of Boat Rocker Studios. “We are very proud of the unique place KILLJOYS occupies in the sci-fi world, thanks to Michelle’s voice and our incredible producers, cast and crew. KILLJOYS is a true pleasure to produce, and we’re thankful to our partners at Space and Syfy for loving the show just as much as we do and for allowing this incredible ride to continue.” Tonight at FAN EXPO in Toronto, Space presents a special advance screening of the KILLJOYS Season 2 finale at 6:30 p.m. ET in the John Bassett Theatre. Immediately following the screening, INNERSPACE hosts Ajay Fry, Teddy Wilson, and Morgan Hoffman moderate a jam-packed KILLJOYS panel with star Aaron Ashmore, cast mates Sarah Power, Rob Stewart, Thom Allison, Morgan Kelly, and Tamsen McDonough, along with showrunner Michelle Lovretta. Fans with a valid FAN EXPO pass or tickets for Thursday night have access to the panel. Admittance is first come first served. For more info on acquiring FAN EXPO tickets and passes, click here. Season 2 of KILLJOYS on July 1 debuted with an impressive audience of 444,000, a 12% increase from Season 1. Throughout its Season 2 run, the series has reached nearly 1.1 million viewers each week and more than 3.1 million to viewers to date. Season 1 of KILLJOYS is available now on CraveTVTM. In the Season 2 finale of KILLJOYS “How to Kill Friends and Influence People,” (Friday, Sept. 2 at 9 p.m. ET on Space), the Killjoys and an old enemy join forces in a desperate bid to thwart Level Six’s plans for The Quad. KILLJOYS was created by Michelle Lovretta (LOST GIRL, THE SECRET CIRCLE) who also serves as executive producer and showrunner. Executive producers are David Fortier, Ivan Schneeberg, and Karen Troubetzkoy. Universal Cable Productions distributes the series worldwide. KILLJOYS is produced by Temple Street Productions in association with Space and Syfy. Production Executives for Bell Media are Rebecca DiPasquale and Kathleen Meek. Tom Hastings is Director, Independent Production, Bell Media. Corrie Coe is Senior Vice-President, Independent Production, Bell Media. Mike Cosentino is Senior Vice-President, CTV and Specialty. Randy Lennox is President, Broadcasting and Content, Bell Media.

About Space
Space is home to phenomenal programming including imaginative dramas, epic movies, engaging reality series, and the daily entertainment talk show INNERSPACE, the source for all-things genre, and the popular after show AFTER THE BLACK. Named “Channel of the Year” in 2013 by Playback Magazine, Space is also home to original series ORPHAN BLACK and KILLJOYS, and the exclusive Canadian home for signature series DOCTOR WHO, THE EXPANSE, DARK MATTER, and the upcoming AFTERMATH. Space content is always available at Space.ca, and on Facebook, @SpaceChannel, and other social media platforms. Space is part of Bell Media, which is owned by BCE Inc. (TSX, NYSE: BCE), Canada’s largest communications company.

Much Heads Back to School with an A+ Lineup, Beginning Septemb...

THE COORS LIGHT GAMES Champion is Crowned Tonight at 10:30 p.m...