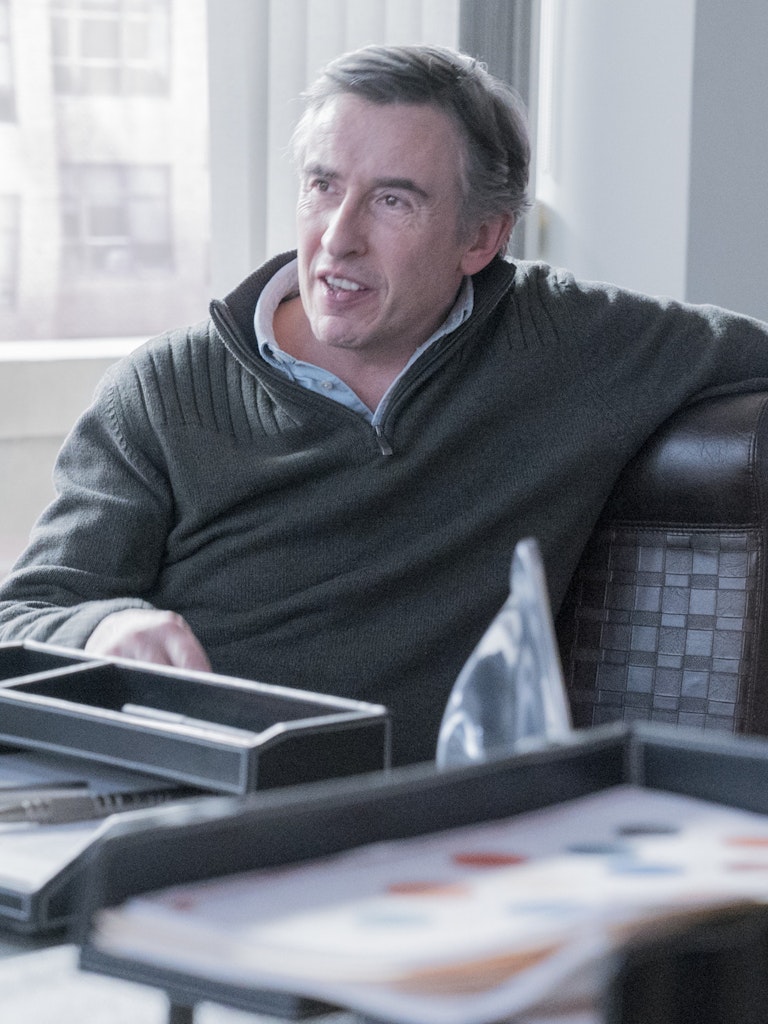 – Steve Coogan, Kathryn Hahn, and Bradley Whitford star in caustic examination of the pursuit of happiness, a pursuit that might just be the very thing causing unhappiness in the first place –

“Thomas Jefferson, he wrote that line, ‘Life, Liberty and the pursuit of Happiness’… What the f#@k is happiness?” – Thom Payne in HAPPYISH TORONTO (March 31, 2015) – The highly anticipated new SHOWTIME comedy HAPPYISH will make its historic debut on CraveTVTM it was announced today, marking the first time in Canada that a premium pay series will have an exclusive first-window on a subscription streaming service. HAPPYISH becomes the first SHOWTIME series to be made exclusively available to CraveTV subscribers as part of its multi-year agreement with CBS Corporation that was announced last month. Raunchy and star-studded, HAPPYISH begins streaming Sunday, April 26 at 9:30 p.m. ET on CraveTV, day-and-date with SHOWTIME in the U.S. New episodes will be available weekly on Sundays at the same time, in the official SHOWTIME- branded collection only on CraveTV. Bitingly funny, scathing, and raw, the series stars Oscar® and Golden Globe® nominee Steve Coogan (Philomena) as Thom Payne, a 40-something advertising executive who’s trying his best to at least maintain a state of “happyish”, while aging out of an industry that’s obsessed with youth, worrying that the mood stabilizers he’s on are destroying his sex life, and obsessing that his generalized dissatisfaction is affecting his six-year-old son. “The debut of HAPPYISH marks an historic moment for both CraveTV and our instantly popular SHOWTIME Collection,” said Mike Cosentino, Senior Vice-President, Programming, CTV Networks and CraveTV. “We are looking forward to delivering CraveTV subscribers our first-ever exclusive SHOWTIME series that will grow episode-by-episode each and every week.” With more than 400 hours of some of the most acclaimed, star-studded premium programming available anywhere, the popular SHOWTIME Collection on CraveTV features a long list of award-winning titles including THE AFFAIR, MASTERS OF SEX, RAY DONOVAN, PENNY DREADFUL, HOMELAND, NURSE JACKIE, WEEDS, and more. Click HERE for a look at HAPPYISH. **Media Note** Photography available online at https://www.bellmedia.ca/pr/ HAPPYISH stars Steve Coogan as Thom Payne, whose world is thrown into disarray when his 25-year-old “wunderkind” boss arrives, throwing around words like “digital” “social”, and “viral”. Thom’s mentor insists he is in need of a “rebranding”, while his corporate headhunter suggests he just has a “low joy ceiling.” But perhaps, after 44 years on this ludicrous planet, settling for “happyish” is the best Thom can expect. The series also stars Kathryn Hahn (GIRLS) as Thom’s wife Lee, and Emmy® Award winner and Golden Globe nominee Bradley Whitford (THE WEST WING), as Thom’s friend Jonathan. Comic legend Rob Reiner and Emmy and Tony® winner Ellen Barkin (THE NEW NORMAL) guest star, along with Emmy Award winner Carrie Preston (THE GOOD WIFE), Molly Price (THIRD WATCH), and Andre Royo (THE WIRE). The comedy is created, written, and executive produced by critically acclaimed author and regular This American Life contributor Shalom Auslander. Emmy Award nominee Ken Kwapis (He’s Just Not That Into You) executive produces and directed the pilot. The series is co-executive produced by Kwapis' producing partner Alexandra Beattie under their In Cahoots banner.

TSN and Global Hit the Greens of Augusta to Deliver Complete L...