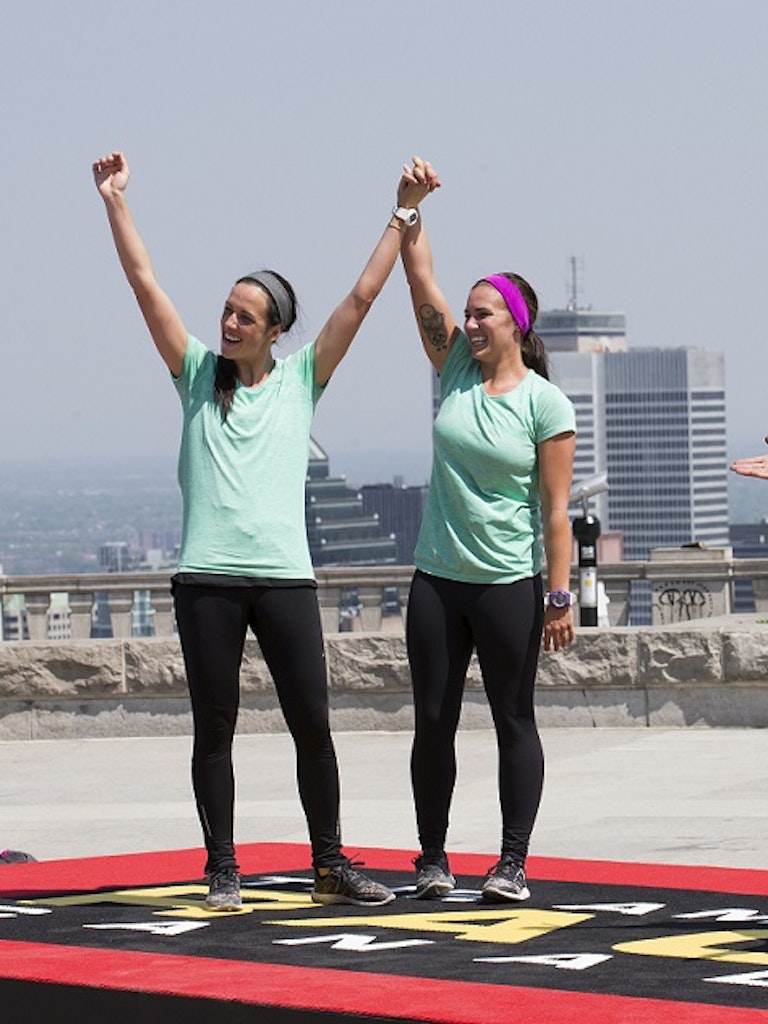 – Dating couple from Toronto are the first all-female team to win THE AMAZING RACE CANADA –
– Exclusive content available at CTV.ca/TheAmazingRaceCanada –
– Follow @AmazingRaceCDA and the official Facebook page for all the latest updates –

After racing through three countries, seven provinces, 14 cities, and over 25,000 kilometres, dating couple Steph and Kristen become the first all-female team to win THE AMAZING RACE CANADA. Following a nail-biting fight to the finish line in Montréal, Steph and Kristen were the first team to meet host Jon Montgomery at the final Pit Stop located at the top of Mount Royal, taking home $250,000 in cash, a once in a lifetime trip for two around the world with accommodations provided by Hotels.com, and their choice of any one of the Chevrolet cars and trucks driven along the Race. In this final leg, with everything on the line, Steph and Kristen beat out fellow finalists Jillian and Emmett, and Joel and Ashley. “We feel so lucky, there are so many strong ladies and it could have gone to anyone, but we wanted to prove that we’re just as tough as the guys,” said Kristen. “I couldn’t have asked for a better teammate and partner in this race, and better girlfriend,” added Steph. “She really kept it together for us and I’m so proud of her – it was so much fun.” **MEDIA NOTE** To download additional artwork for Season 4 of THE AMAZING RACE CANADA, please visit BellMedia.ca/PR. Episode 411 Recap: From the Pit Start in St. Andrew’s, N.B., the final three teams travelled west to Montréal for the race to the finish. After touching down, teams proceeded to Cirque du Soleil to find their next clue. Here teams had to go behind-the-scenes of the famed entertainment company and compete in a three part challenge. First, one team member had to use a combination of strength and momentum to master the bungee trapeze. Second, one team member tested their balance as they made their way from one end of the studio to other without touching the ground on a balance ball. And finally, teams had to master the art of climbing the Chinese pole. Jillian and Emmett departed first but had trouble finding a cab, soon falling behind the pack. Teams then headed to the heart of Montréal and to Canada’s oldest bank – The Bank of Montréal. Here, teams chose an envelope from the teller, finding inside a message of words that were written in code. Using an old school code book that was once used by the bank to keep information confidential, teams had to decipher the message, and then read it back to their teller. Once they cracked the code, teams received a key that unlocked a safety deposit box in the bank’s vault to find their next clue. Ashley and Joel took the lead, followed shortly by Steph and Kristen. Next, teams were faced with a Road Block as they made their way to Île Sainte-Hélène. In this Road Block, one team member had to tackle a series of obstacles built into the structure of the Montréal Biosphère. First, one team member had to climb up 120 feet to reach the observation deck, and from there, traverse across the inside of the dome before rappelling down the exterior. Joel and Steph were neck and neck as they raced to retrieve their next clue. Teams then made their way to St-Viateur Bagel. Written on a board inside were three bagel orders for three different locations in the surrounding area. Racers had to use bagel sticks to correctly fill and deliver each order by foot with nine types of bagels to choose from and three bagel sticks per order. Racers had to be careful to ensure the exact order – type of bagel and exact placement on stick – was delivered to each customer. Kristen raced through the challenge, while Jillian struggled to remember the correct names of the locations, and also placed the bagels in reverse order. The next clue took teams to the Moment Factory, a Montréal-based multimedia entertainment studio. Here, teams had to correctly match 11 phrases they heard along the Race to their corresponding legs, with 33 phrases to choose from. Once all 11 phrases were matched, teams received their next clue. Jillian and Emmett arrived last, but soon realized that the other two teams were still at the challenge. They were still in it! Teams then travelled to the top of Mount Royal in search of Jon at the final mat. Steph and Kristen arrived in first place winning Season 4 of THE AMAZING RACE CANADA. Last night’s episode encores this Saturday, Sept. 17 at 2 p.m. ET/PT and at 8 p.m. ET/PT on CTV and CTV GO. Visit CTV.ca to check local listings. Previous seasons of THE AMAZING RACE CANADA are available now on CraveTV. Viewers can catch Steph and Kristen live today (Sept. 14) on 104.5 CHUM FM (Weekdays at 5:30 a.m. ET), YOUR MORNING (Weekdays at 6 a.m. ET), and CP24 BREAKFAST (Weekdays 5:30 a.m. ET, and Saturday and Sunday at 7 a.m. ET), and THE SOCIAL (Weekdays 1:00 p.m. ET) as they discuss winning THE AMAZING RACE CANADA.