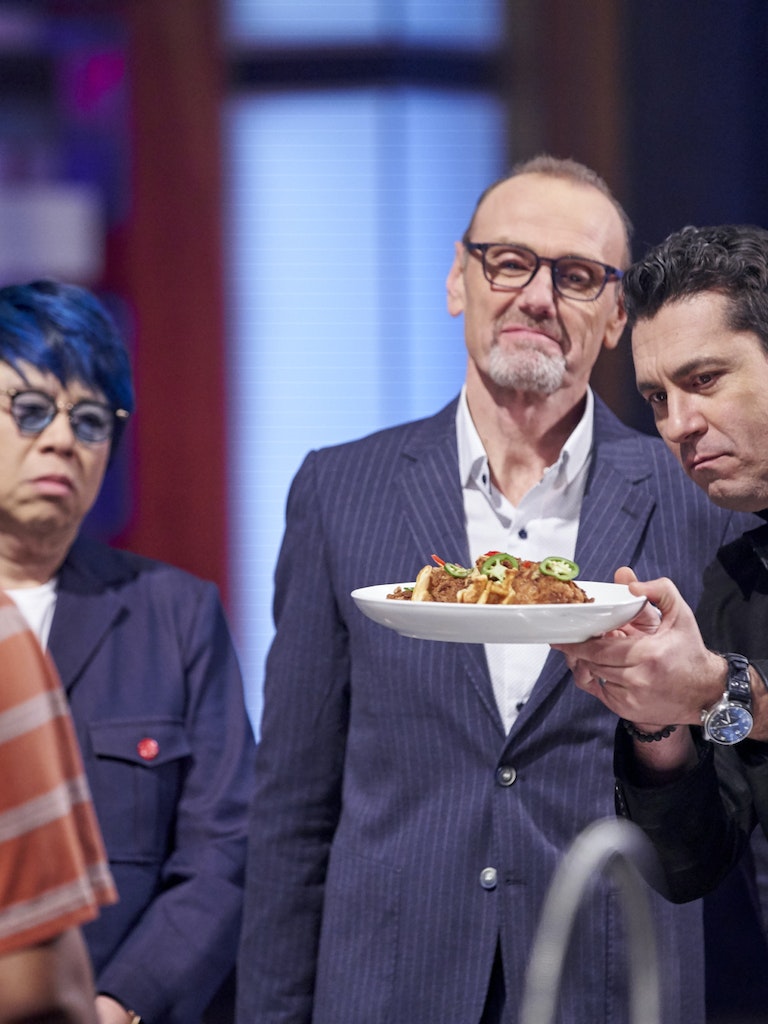 Being selected to compete on MASTERCHEF CANADA is a tremendous honour, all on its own. Still, nobody likes to be sent home. That’s what competition is all about.

Season 6 of MASTERCHEF CANADA on CTV began with some tasty twists in the two-hour premiere Monday night. The 18 invited home cooks prepared audition dishes, which allowed judges Michael Bonacini, Alvin Leung, and Claudio Aprile to cut the field to 12. Then the tension was ratcheted up with the first elimination challenge of the season, which jettisoned two more home cooks.

The two cooks forced to say goodbye after the elimination challenge were Steven Lapointe, an international figure skater from Acton Vale, Qué.; and Cliff McArthur, a cybersecurity analyst from Scarborough, Ont. Here’s what the two of them had to say about the MASTERCHEF CANADA pressure-cooker:

STEVEN: “The best piece of advice I received was from Chef Alvin, who said that I need to balance my dishes better, so that there is not too much of one component.”

CLIFF: “The best piece of advice I got was when Chef Claudio said to stay true to myself and my cooking style.”

Q: Was there an element of appearing on MASTERCHEF CANADA that was harder than you thought it would be?

STEVEN: “Deciding what I was going to cook was definitely harder than I expected. It looks so easy from home, but it is another story in the MASTERCHEF CANADA Kitchen.”

CLIFF: “Definitely much harder than it looks – it's easy to sit and play armchair chef when you don't have a timer on your back and your phone on standby. There are tons of things going on that you have to be aware of while you are trying to focus on your dish. Seeing and doing are two different things, and doing this is one of the best experiences that I ever had."

Q: Looking back, what would you have done differently in the elimination challenge? Michael Bonacini commented that ground beef was a tough choice by Steven, because it's difficult to elevate it and make it feel luxurious, and Cliff was coming into it after having prepared "one of the best audition dishes we have ever tasted," according to Claudio Aprile. But it's interesting that both of you made different versions of sandwiches in the elimination challenge that didn't quite impress the judges enough.

STEVEN: “I understand what Chef Michael said (about ground beef being a tough choice), but meat like that is a part of my heritage, so I would not have changed the protein, but I would have changed my dish. Instead of trying to be something that I am not, I decided to keep with my Québec heritage. This is the first thing I made coming back from elimination. It is another modern version of a tourtière. It combines my love for pastry and Québec food.”

CLIFF: “In hindsight, I can see what Chef Michael and Chef Alvin meant by ‘roadhouse’ in my presentation. I tried to play it off with the ‘everything is bigger in Texas’ smile, because I ran out of time before cutting them into sliders. Not leaving it open-faced was another presentation mistake that I made. If I had to do it over again, I would still make the barbeque pulled duck sliders, but I would ditch the bread for deep-fried duck rinds.”

Q: What's next for you in the cooking world?

STEVEN: “I applied for pastry school at the Québec Tourism and Hotel Institute in Montréal, to become the best-rounded chef possible. I recently was hired at Arthurs Nosh Bar in Montréal, the one that was featured on the Rachael Ray show a month back or so.”

CLIFF: “With this experience under my belt, I feel confident that I can be successful in my food-business dreams of bringing my authentic Texas barbeque and Southern-comfort cuisine to Canada. Next for me is incorporating my barbeque business and setting up shop.”

THIS JUST IN: PBR Canada and TSN Extend Broadcast Partnership ...