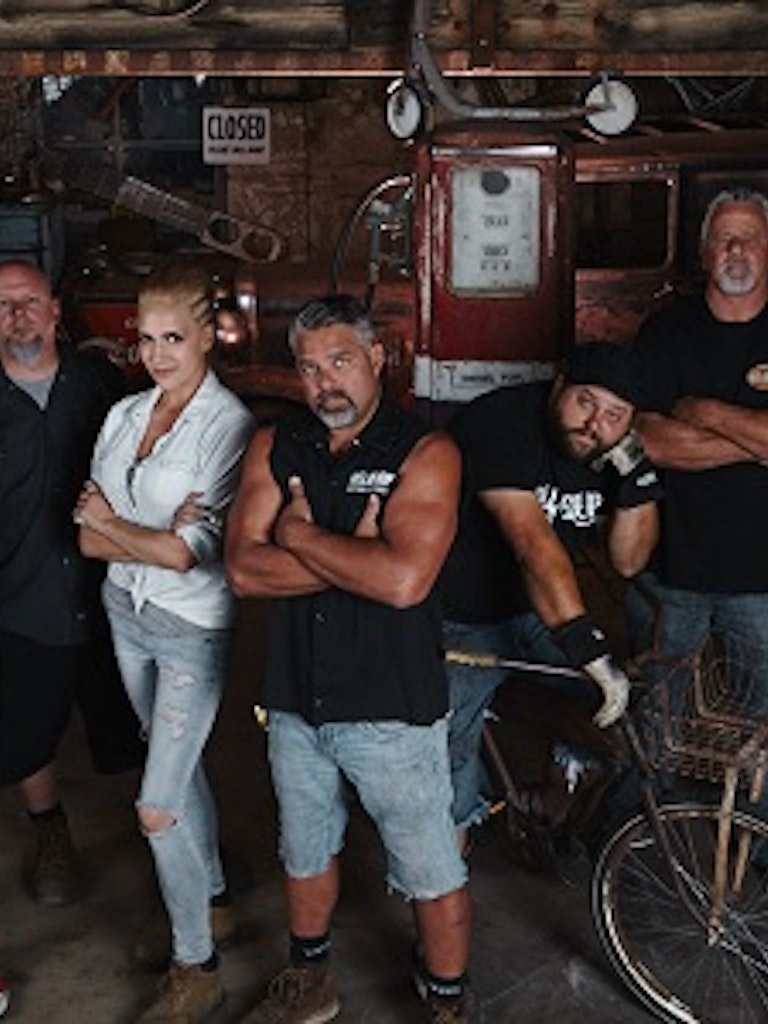 TORONTO (March 3, 2017) – The true outlaws of the car world, Steve Darnell and his crew of rust-loving, Sin City rebels, prove that their unconventional style produces the sickest rides on the planet in an all-new season of VEGAS RAT RODS. Airing Thursdays at 8 p.m. ET/5 p.m. PT beginning March 30 on Discovery, the 12-part original Canadian series from Toronto’s Proper Television (CANADA’S WORST DRIVER and MASTERCHEF CANADA) follows auto mastermind Steve Darnell and his Welder Up team of mechanics, automotive fabricators, and welders as they build badass rides out of rusty junk strewn across the Nevada desert. 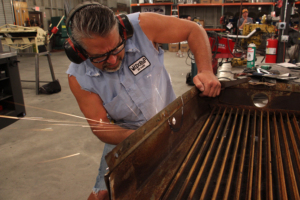 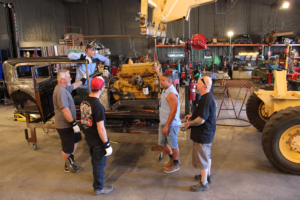 (L-R:) Automotive mastermind Steve Darnell cutting a grill shell; Welder Up team discussing build Last season, Darnell and the Welder Up crew entered the big leagues. Moving their shop from the edge of the desert to just steps from the Las Vegas strip raised their profile in Sin City and solidified their place as the “go to guys” for custom, one-of-a-kind creations. But with success comes challenge. As more and more clients come knocking on the garage door, Darnell is finding his once-trusted wells of vintage parts strewn across the Las Vegas desert drying up. Determined never to fail, Darnell ventures deeper into the desert to source the parts he needs to create personalized and signature works of art for his clients. To help meet the shop’s outrageous demands and deadlines, Darnell drafts Edmonton native Cheyenne Ruether into his rat-rod world. A former hot rod and custom car refinisher, Ruether struggles to cope with Darnell’s unorthodox methods and Welder Up’s passion for rust. Together the crew take on some of their most challenging builds to date, all while keeping Welder Up at the pinnacle of custom creativity. In its Season 2 debut, VEGAS RAT RODS reached more than 1.3 million viewers and achieved a 32% increase among total viewers, year over year. Throughout the season, the series placed Discovery in the Top 2 entertainment specialty channels among all key adult demographics. Episode highlights from Season 3 of VEGAS RATS RODS: “FreakShow on Wheels” Thursday, March 30 at 8 p.m. ET/5 p.m. PT An enthusiastic cowboy comes to Darnell looking for a rat rod to lift the sagging spirits of his small farming community. Darnell quickly lands on the idea of making a death-defying carnival ride on wheels. In no time, an old farm truck is transformed into a roaring rat rod that would frighten even the most daring rollercoaster enthusiast. But will this rolling house of horrors have any chance of bringing joy to anyone other than Darnell? “Timber Busting Diamond T” Thursday, April 6 at 8 p.m. ET/5 p.m. PT The owner of a trucking company comes to Darnell looking for a vintage ride that celebrates the roots of his business. Darnell faces an uphill battle meeting his demands for a 1930s era cab. After an unproductive search, Darnell turns to an old friend, hoping to score a priceless family heirloom to make the build happen. Ruether takes on more responsibilities, hoping to show Darnell and the crew that the plucky Canadian can excel no matter what challenge gets thrown her way. Meanwhile, the rest of the team risks Darnell’s wrath when they argue that his pride just might ruin the most stunning work truck they’ve ever created. “Rock ‘N Rollin’ Pickup” Thursday, April 13 at 8 p.m. ET/5 p.m. PT Darnell and the Welder Up crew have got their work cut out for them when a couple commissions a build to celebrate their impending wedding anniversary. This no-nonsense pair of body guards are looking for a rat rod that truly reflects their rebellious streak. However, the car they have dropped in Darnell’s lap is the polar opposite of badass. The crew needs to transform a harmless looking pickup into a raging bat out of hell. Getting the team to buy into the vision is hard enough, but a couple of costly errors threaten to put this anniversary party on hold. Subscribers can access live streaming of VEGAS RATS RODS Season 3 on the Discovery GO app and catch up on Season 1 now streaming on CraveTV  and Season 2 streaming on the Discovery GO app. VEGAS RAT RODS is produced for Discovery by Toronto’s Proper Television. The series is executive produced by Guy O’Sullivan. Jennifer Scott is the Series Producer. For Discovery, Ken MacDonald is Vice-President and General Manager, Discovery Networks. Tracey Pearce is President, Distribution and Pay, Bell Media. Source: Numeris