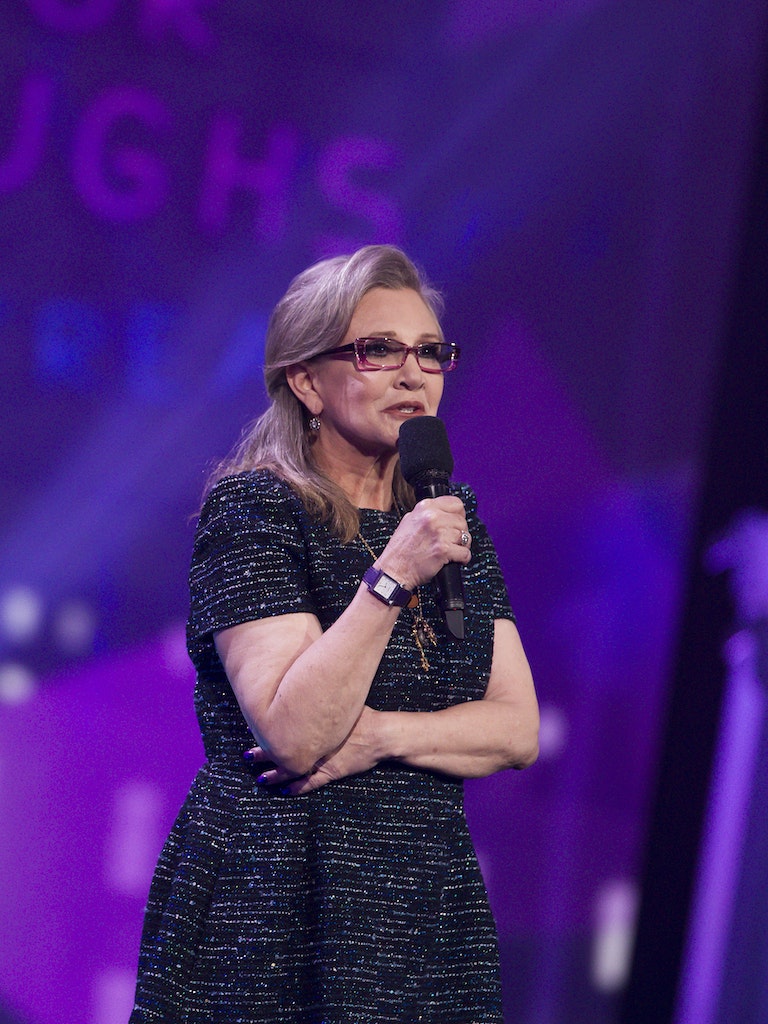 – Filmed last summer at the Just For Laughs Festival in Montréal, the gala starring the late Carrie Fisher premieres this Saturday, Jan. 21 at 10 p.m. ET/PT on The Comedy Network –
– The one-hour special also features comedians Cristela Alonzo, Joel Creasey, Brian Posehn, and Canadian comics Ivan Decker and Nathan Macintosh –
– Season 5 of JUST FOR LAUGHS: ALL ACCESS to premiere later this year on Comedy –

“In a lot of ways, I am Montréal. Our exteriors are beginning to show their age, we’ve both made some questionable financial decisions, and people keep saying we peaked in the 70s…and the response to those people is a resounding, F@ck You.” On her role in Star Wars: The Force Awakens: “The role was very progressive. I read the scenes and saw that my character was now a respected general, who wore practical clothing. I mean for a minute there I thought they made my character a man.” – The late Carrie Fisher in JUST FOR LAUGHS: ALL ACCESS TORONTO (January 19, 2017) – The Comedy Network pays tribute to the legacy of the late iconic actor, author, and humourist Carrie Fisher by premiering her one-hour JUST FOR LAUGHS: ALL ACCESS gala special in advance of its originally scheduled broadcast date later this year. A long-time advocate for ending the stigma against mental health, the Carrie Fisher JUST FOR LAUGHS: ALL ACCESS special premieres this Saturday, Jan. 21 at 10 p.m. ET/PT on Comedy, in advance of Bell Let’s Talk Day on January 25. For a look at the special, click here. Filmed on location at the Just For Laughs Festival in downtown Montréal in July, 2016, the special episode of JUST FOR LAUGHS: ALL ACCESS is hosted by Fisher and also features performances by comedians Cristela Alonzo, Joel Creasey, Brian Posehn, and Canadian comics Ivan Decker and Nathan Macintosh. Full episodes of JUST FOR LAUGHS: ALL ACCESS are available on demand on TheComedyNetwork.ca after their broadcast premiere. Returning with its fifth season later this year, JUST FOR LAUGHS: ALL ACCESS is an exclusive stand-up series that featuring the biggest names in comedy from around the world. From the stages of Montréal’s grand Place des Arts and gritty Club Soda, Just For Laughs brings the very best in stand-up today.

About Just For Laughs Group
Just For Laughs Television is one of the leading producers of stand-up and variety programming and has produced television programs that have been seen around the world on FOX, ABC, MTV, TBS, CBC, HBO, BBC1, Showtime, TEN Australia, HBO Canada, and The Comedy Network. The company has also expanded into scripted and non-variety programming with the acclaimed shows The Tournament (CBC), Deal with It (W Network), and Bullet in the Face (IFC). Just For Laughs Television is part of the Just For Laughs Group. Founded in 1983, the Just For Laughs Group’s growth is concentrated on four major focal points: Festivals (in Montreal, Toronto, Vancouver and Sydney); television production (most notably Gags, seen in 135 countries and on 95 airlines); live shows (Canadian tour dates for Jerry Seinfeld, Jim Gaffigan, and Kevin Hart); Its inaugural Montreal Festival is over 30 years old and is now the world’s largest and most prestigious comedy event, welcoming 1.7 million people each summer.

March 17 is St. Perfect Day in LETTERKENNY as Surprise Special...