TORONTO (September 21, 2016) – In advance of the upcoming launch of its new app, iHeartRadio Canada announced today the appointment of Andrea Collins as its official English Canada Ambassador and the launch of the new weekend countdown show The iHeartRadio TOP 20. Hosted by Collins and launching this weekend, The iHeartRadio TOP 20 features the top hits getting airplay each week from coast-to-coast-to-coast, interviews with the artists behind the hits, and the latest celebrity news and gossip. The show airs weekends across the country on Canada’s #1 hit music brand Virgin Radio (check local Virgin Radio websites for specific times). 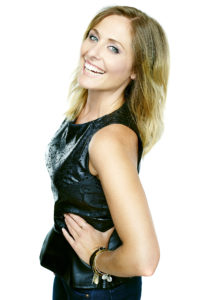 “I’m so excited to invite listeners across the country to join me in counting down Canada’s top tunes on The iHeartRadio Top 20,” said Collins. “It’s an honour to be part of iHeartRadio as it launches in Canada, and I look forward to getting acquainted with music lovers as we dive into what the nation is listening to every week.” “The iHeartRadio TOP 20 is where all the biggest hits will live every weekend on our Virgin Radio stations across Canada,” said David Corey, Vice-President, Programming, Bell Media Radio. “As our iHeartRadio Ambassador in English Canada, Andrea is the perfect chaperone to deliver a solid two hours of music and interviews every weekend.” Also announced today, ENERGIE Montréal 94.3 personality Patrick Langlois was named for iHeartRadio Ambassador in French Canada. The iHeartRadio TOP 20 will air nationwide on Virgin Radio stations in Vancouver, Calgary, Edmonton, Winnipeg, London, Kitchener, Toronto, Montréal, and Halifax. In January 2016, Bell Media and iHeartMedia announced an exclusive new partnership that brings the iHeartRadio brand to Canada this fall. Launching soon, the free, all-in-one digital radio and music streaming service will allow listeners access to more than 100 radio stations and more than 100 digital channels, featuring all of their favourite music from every artist in the world.