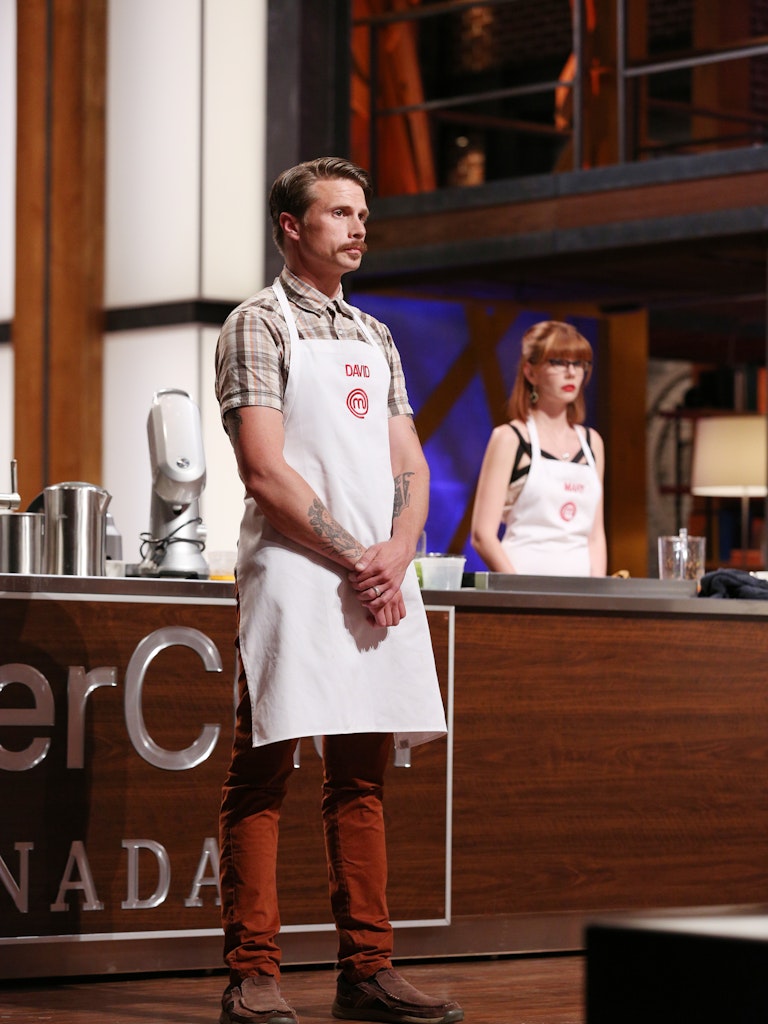 – David Young from Moncton, N.B. is the first Top 14 home cook eliminated from the competition –
– On the next episode of MASTERCHEF CANADA, the home cooks face their first Team Challenge as they compete in a rib cook-off for Canadian firefighting heroes on Sunday, March 13 at 7 p.m. ET/PT on CTV –

Following the first Mystery Box and Elimination Challenge of the season, MASTERCHEF CANADA judges Michael Bonacini, Alvin Leung, and Claudio Aprile revealed that Top 14 home cook David Young, a carpenter from Moncton, N.B., would be the first one relinquishing his white apron and leaving the kitchen. With 13 home cooks remaining, MASTERCHEF CANADA returns next week on Sunday, March 13 at 7 p.m. ET/PT on CTV and the CTV GO app, with the season’s first Team Challenge honouring Canadian firefighting heroes. In tonight’s episode, a Canadian-themed Mystery Box Challenge had the home cooks using 13 iconic ingredients, one from each province and territory in Canada, to create their dishes. Shawn Karls won over the judges with his maple pastry cream tart, and became the first home cook to enter the MASTERCHEF CANADA pantry. With the winning dish, Shawn was safe from elimination and also got the chance to select the ingredients his fellow home cooks had to use during the Elimination Challenge. Choosing from three international cuisines that represent each judge’s culinary roots, Shawn decided on ingredients representing Chef Claudio Aprile’s South American heritage. As a surprise extra advantage, Shawn was also able to save two of his fellow home cooks from elimination and selected Terry Adido and Vince Spitale. As a number of home cooks struggled to create authentic South American dishes, Matthew Astorga had no problem and his corn panna cotta with passion fruit was the winning dish, while the judges selected Michelle Nault’s stuffed poblano pepper as the runner-up. As winners of the Elimination Challenge, Matthew and Michelle will be the captains for next week’s first Team Challenge. With dishes that failed to impress the judges, the bottom three home cooks were David Young, Veronica Cham, and Jennifer Baglione, and the judges ultimately decided David would be leaving the MASTERCHEF CANADA kitchen. In the next all-new episode of MASTERCHEF CANADA (Sunday, March 13 at 7 p.m. ET/PT on CTV and CTV GO), the home cooks face their first Team Challenge. The red and blue teams have the honour to cook for Canadian firefighting heroes in Unionville, ON. As they face off in a rib cook-off one team goes down in flames. Back in the MASTERCHEF CANADA kitchen, the losing team members tackle a Pressure Test that delivers both sweet and sour results. The remaining Top 13 home cooks vying for the title of MASTERCHEF CANADA and the $100,000 cash prize are: For more on MASTERCHEF CANADA, fans can visit CTV.ca/MasterChefCanada for exclusive content, including must-see videos with the Top 14 and the judges, bios, full episodes, sneak peeks, and extras. New episodes of MASTERCHEF CANADA are available following their broadcast premiere on demand at CTV.ca and on the CTV GO app, and encore Mondays at 8 p.m. ET on M3, Saturdays at 7 p.m. ET/PT on CTV Two, and Sundays at 5 p.m. ET/PT on CTV. Viewers can watch David live on CANADA AM (Weekdays at 6 a.m. ET), CP24 BREAKFAST (Weekdays 5:30 a.m. ET), and CTV MORNING LIVE ATLANTIC (Weekdays at 7 a.m. AT on CTV Two Atlantic) on Monday, March 7 as he discusses his time on MASTERCHEF CANADA. The MASTERCHEF format and finished programmes are represented internationally by Endemol Shine Group, and is based on a format originally created by Franc Roddam. MASTERCHEF CANADA is produced by Proper Television in association with CTV. President of Proper Television, Guy O'Sullivan is executive producer, along with Proper's Vice-President and Creative Director, Cathie James. For Bell Media, Tina Apostolopoulos is Production Executive, Factual and Reality, Independent Production; Robin Johnston is Director, Factual and Reality, Independent Production; Corrie Coe is Senior Vice-President, Independent Production; Mike Cosentino is Senior Vice-President, Programming, CTV Networks and CraveTV; Randy Lennox is President, Entertainment Production and Broadcasting.