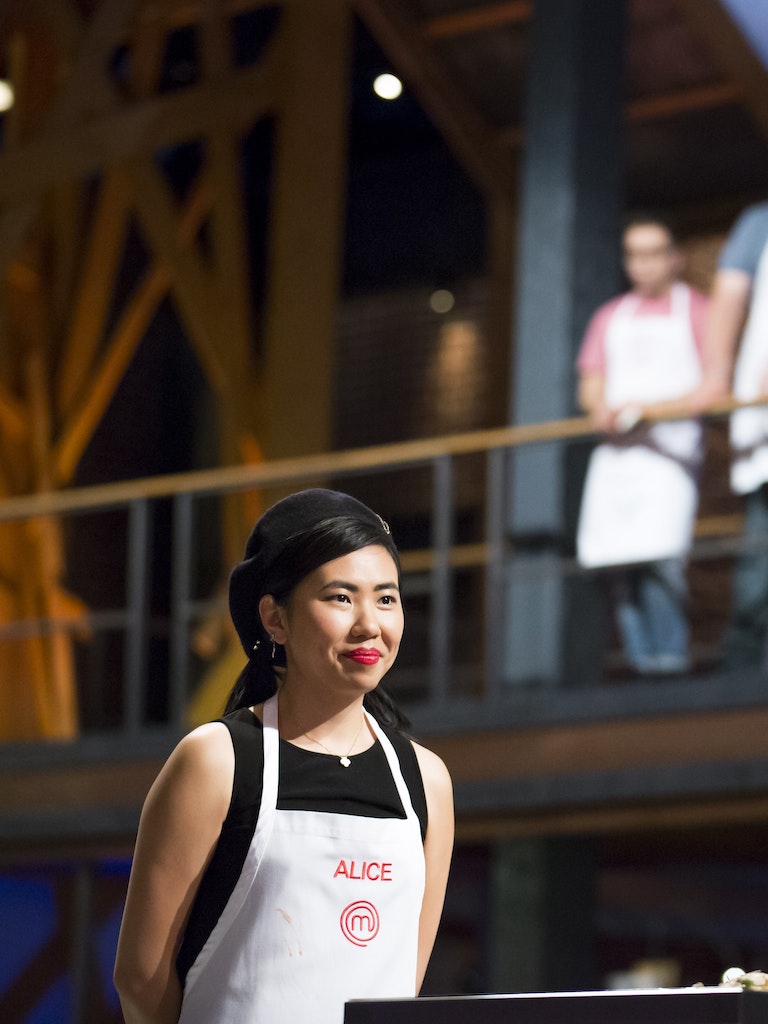 – Toronto, Ont.’s Alice Luo is the first Top 12 home cook eliminated from the competition –
– On the next episode of MASTERCHEF CANADA, the remaining home cooks compete in the first Team Challenge, as they prepare lunches for 105 new Canadians on Thursday, March 16 at 9 p.m. ET/PT on CTV –

Following the first Mystery Box and Elimination Challenge of the Season 4, MASTERCHEF CANADA judges Michael Bonacini, Alvin Leung, and Claudio Aprile revealed that Alice Luo, a PhD student from Toronto, Ont. would be the first home cook of the Top 12 to leave behind a white apron and exit the kitchen. With 11 home cooks now remaining in the competition, MASTERCHEF CANADA returns next week on Thursday, March 16 at 9 p.m. ET/PT on CTV and CTV GO, with the season’s first Team Challenge. In tonight’s episode, the Top 12 home cooks faced their first Mystery Box Challenge, lifting their boxes to discover a meaningful object from their kitchens at home. With one hour and access to a beautiful specialty pantry, the home cooks were tasked with creating a dish inspired by their object. Anxious to impress the judges and win an advantage, Trevor accidentally made a hasty mishap in the kitchen that left him unable to continue his dish until Alice came to the rescue. Despite the setback, Trevor impressed the judges with his pan-roasted chicken breast and was declared the winner, becoming the first home cook to enter the MASTERCHEF CANADA pantry. With his winning dish, Trevor was safe from elimination and was also given the chance to select the core ingredient his fellow home cooks would use during the Elimination Challenge. When the judges revealed that everyone would be cooking with stone fruit, they also revealed that Trevor would determine whether they had to cook a sweet or savoury dish. In one final twist, Trevor got to choose which home cooks he could save from elimination – all the men or all the women – and chose to bring the men up to the gallery with him. The female home cooks then had one hour to make a dish that would impress the judges and save them from elimination. Justine’s peach gazpacho with dessert cheese ravioli and Miranda’s bison steak with plum-cherry sauce earned the top spots, automatically making them team captains for the next team challenge. With dishes that failed to win over the judges, Alice Luo, Mai Nguyen, and Thea VanHerwaarden were the bottom three home cooks, with the judges ultimately deciding that Alice would be the first of the Top 12 home cooks to leave the MASTERCHEF CANADA kitchen. In the next all-new episode of MASTERCHEF CANADA, “True Patriot Love” (Thursday, March 16 at 9 p.m. ET/PT), the home cooks receive patriotic red and white aprons for their first team challenge, where they prepare diverse and delicious lunches for 105 new Canadians following their Citizenship ceremony. The losing team fights for survival in a pressure test that features a sophisticated handmade pasta dish. The remaining Top 11 home cooks vying for the title of MASTERCHEF CANADA and the $100,000 cash prize are: MASTERCHEF CANADA airs Thursdays at 9 p.m. ET/PT on CTV, CTV GO, and on demand the following day. Episodes encore Saturdays at 7 p.m. ET/PT on CTV Two, Sundays at 5 p.m. ET/PT on CTV and Sundays at 7 p.m. ET beginning March 19 on Gusto. Fans are invited to visit CTV.ca/MasterChefCanada throughout the season for exclusive content, including background on the Top 12 and the MASTERCHEF CANADA judges, as well as interviews, recipes, and more. CTV.ca will also offer viewers behind-the-scenes glimpses of this season’s challenges, culinary creations, triumphs, and upsets. Seasons 2 and 3 of MASTERCHEF CANADA are currently streaming on CraveTV™, and in encore broadcasts on Gusto. The MASTERCHEF format and finished programmes are represented internationally by Endemol Shine Group, and is based on a format originally created by Franc Roddam.  MASTERCHEF CANADA is produced by Proper Television in association with CTV. Proper’s Vice-President and Creative Director Cathie James is the show runner and executive producer; Marike Emery is the Series Producer; President of Proper Television, Guy O’Sullivan, is the executive producer. For Bell Media, Danielle Pearson is Manager, Original Programming, Factual and Reality; Robin Johnston is Director, Original Programming, Factual and Reality; Corrie Coe is Senior Vice-President, Original Programming. Pat DiVittorio is Vice-President, CTV and Specialty Programming; Mike Cosentino is Senior Vice-President, Content and Programming. Randy Lennox is President, Bell Media.