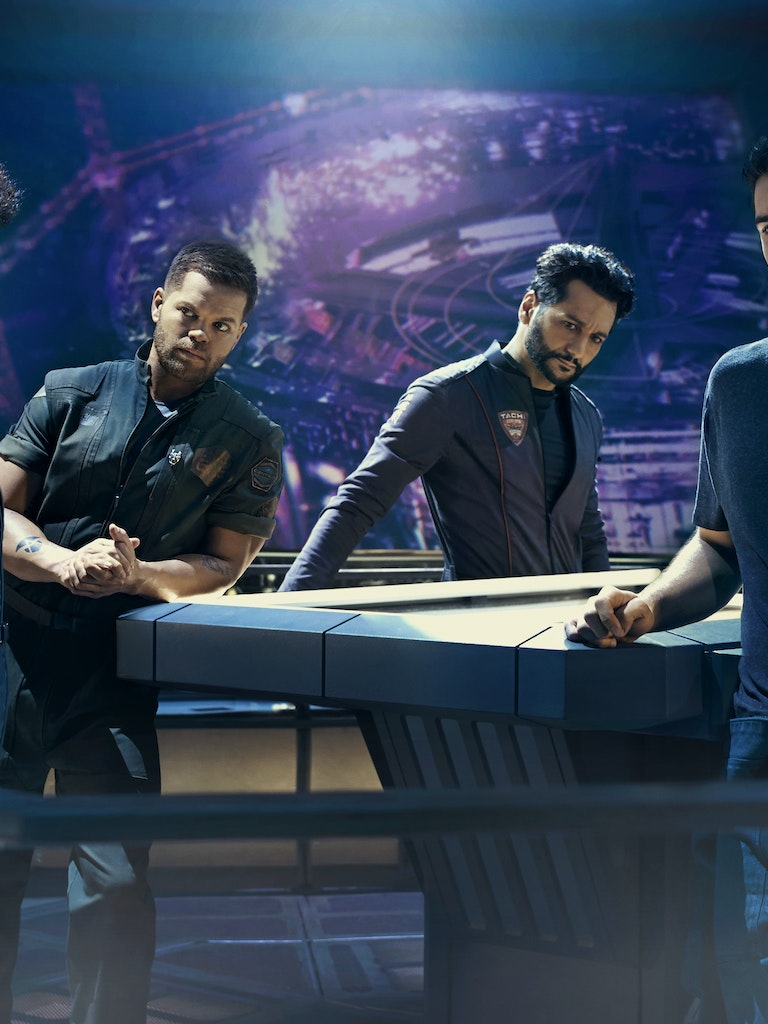 “Best science-fiction show in a decade” – NPR For a special behind-the-scenes featurette including a behind-the-scenes tour of the set and full season recap hosted by actor Adam Savage (MYTHBUSTERS), click here. TORONTO (January 24, 2017) – Space’s epic political sci-fi thriller THE EXPANSE returns with a special two-hour premiere, February 1. Airing Wednesdays at 10 p.m. ET, Season 2 of the one-hour series is based on the international best-selling book series of the same name, and follows a feud between Mars and Earth in an ultimate battle for power. In Season 2 of THE EXPANSE tensions between each division continue to grow, positioning the Rocinante ship’s crew in an ever more precarious situation. An infectious agent called the protomolecule threatens the safety of the entire solar system, while the larger conspiracy that led to its unleashing begins to be exposed. For a sneak peek at the upcoming season, click here. Throughout its run, Season 1 of THE EXPANSE reached nearly 1.1 million viewers each week on Space and was the #2 new series on Canadian entertainment specialty television in the key A25-54 demo. For those who missed out on all of the Season 1 intergalactic drama, Space goes into hyper speed with THE EXPANSE CATCH-UP MARATHON, with episodes 1-5 airing Saturday, Jan. 28 from 4 – 9 p.m. ET, and episodes 6-10 airing Sunday, Jan. 29 from 4 – 9 p.m. ET. Season 1 of THE EXPANSE is also streaming now, exclusively on CraveTV™. THE EXPANSE unfolds across a colonized galaxy 200 years in the future, when two strangers – hardened detective Joe Miller (Thomas Jane, HUNG) and rogue captain James Holden (Steven Strait, MAGIC CITY) – become unwittingly swept up in a vast conspiracy. Filmed on location in Toronto, THE EXPANSE also stars Shohreh Aghdashloo (House of Sand and Fog), Dominique Tipper (Vampire Academy), Cas Anvar (OLYMPUS), Wes Chatham (The Hunger Games: Mockingjay). Frankie Adams (SHORTLAND STREET) also joins the principle cast.

About Space
Space is home to phenomenal programming including imaginative dramas, epic movies, engaging reality series, and the daily entertainment talk show INNERSPACE, the source for all-things genre, and the popular after show AFTER THE BLACK. Named “Channel of the Year” in 2013 by Playback Magazine, Space is also home to original series ORPHAN BLACK and KILLJOYS, and the exclusive Canadian home for signature series DOCTOR WHO, THE EXPANSE, DARK MATTER, and AFTERMATH. Space content is always available at Space.ca, and on Facebook, @SpaceChannel, and other social media platforms. Space is part of Bell Media, which is owned by BCE Inc. (TSX, NYSE: BCE), Canada’s largest communications company.

CraveTV’s Next Canadian Original Series, WHAT WOULD SAL DO?, B...

This February on CraveTV: Fresh, New SHOWTIME and HBO Premiere...