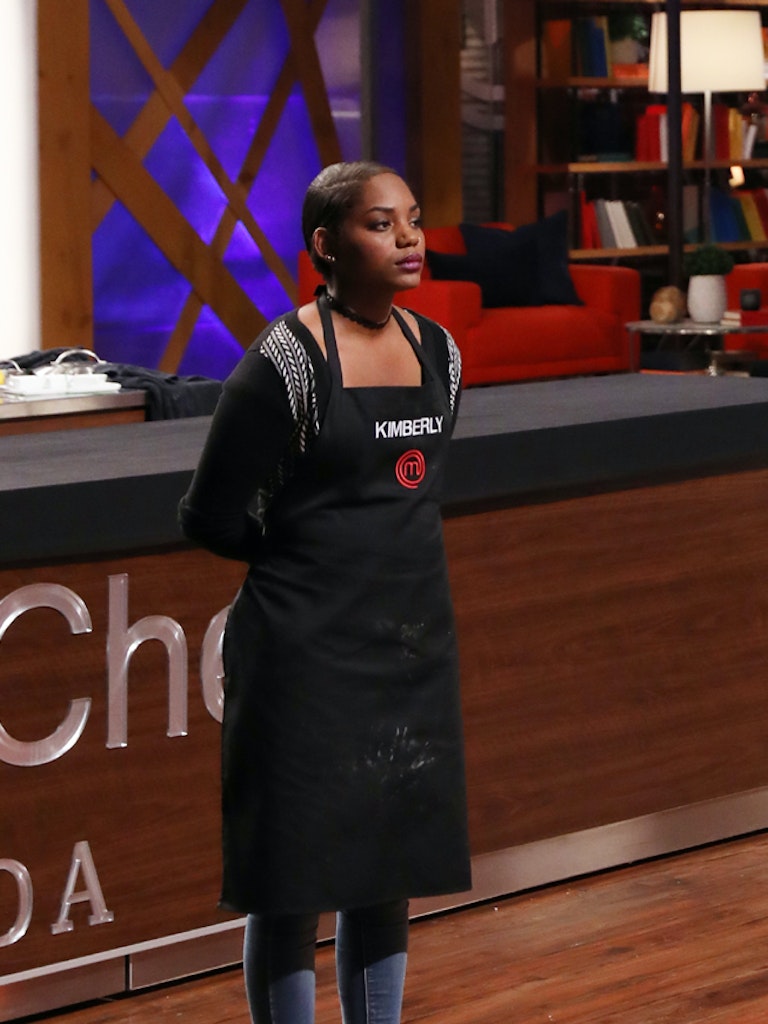 – Malton, Ont.’s Kimberly Duffus is the next home cook eliminated from the competition –
– On the next episode of MASTERCHEF CANADA, Season 3 winner Mary Berg returns, Thursday, March 23 at 9 p.m. ET/PT on CTV –

Following the first Team Challenge and Pressure Test of Season 4, MASTERCHEF CANADA judges Michael Bonacini, Alvin Leung, and Claudio Aprile revealed that Kimberly Duffus, a sales rep from Malton, Ont. would be the next home cook eliminated from the competition. With 10 home cooks now remaining, MASTERCHEF CANADA returns next week on Thursday, March 23 at 9 p.m. ET/PT on CTV and CTV GO, and will feature an appearance from Season 3 winner Mary Berg. In tonight’s episode of MASTERCHEF CANADA, the home cooks faced their first Team Challenge where they donned patriotic red and white aprons and had to prepare a celebratory buffet lunch for 105 new Canadians following their citizenship ceremony. As the winners of last week’s Elimination Challenge, Justine Joyal and Miranda Wasstrom were Team Captains, with Justine receiving the strategic advantage of choosing her Red Team members first. The teams were given two hours to create a noodle dish, a curry dish, and a salad to feed the new Canadians. As the clock ticked down, both teams struggled to manage their time and when it looked like neither team would have their buffet lunches ready before the clock ran out, the judges jumped in to help steer the teams towards finishing the challenge on time. Both teams were eventually able to regain their momentum and set up two beautiful buffets where the new Canadians sampled dishes prepared by both teams to overwhelmingly favourable reviews. After all the patrons finished their meal, they voted for their favourites by putting either a white or red maple leaf into the ballot box. When all the maple leaves were tallied, Justine’s Red Team was declared the winner by just 13 votes. Back at the MASTERCHEF CANADA kitchen, Miranda’s White Team donned black aprons for the first Pressure Test of the season that would send at least one of them home. When the judges presented Miranda with the opportunity to save one member from her team from elimination, including herself, Miranda tearfully chose to save herself. The remaining members of the White Team were tasked with replicating a sophisticated Italian dish – squid ink pasta with honey mushrooms and a soft-boiled hen’s egg. With only 30 minutes on the clock, the home cooks had to harvest squid ink themselves to make their hand-made pasta. In the end, after presenting a dish with a cracked egg that lacked salt, the judges revealed Kimberly would be the next home cook to exit the MASTERCHEF CANADA kitchen. In the next all-new episode of MASTERCHEF CANADA, “The Blind Leading The Blind” (Thursday, March 23 at 9 p.m. ET/PT), the Top 10 are blindfolded and must work in pairs to replicate a seven-layer birthday cake in honour of Canada’s upcoming 150th birthday. With a different flavour for each layer, the duos must decipher each taste without the use of sight before they recreate the cake. The winning pair is safe from elimination, while the other home cooks are challenged to reinvent one of Season 3 winner Mary Berg’s comfort food favourites. The remaining Top 10 home cooks vying for the title of MASTERCHEF CANADA and the $100,000 cash prize are: MASTERCHEF CANADA airs Thursdays at 9 p.m. ET/PT on CTV, CTV GO, and on demand the following day. Episodes encore Saturdays at 7 p.m. ET/PT on CTV Two, Sundays at 5 p.m. ET/PT on CTV and Sundays at 7 p.m. ET beginning March 19 on Gusto. Fans are invited to visit CTV.ca/MasterChefCanada throughout the season for exclusive content, including background on the home cooks and the MASTERCHEF CANADA judges, as well as interviews, recipes, and more. CTV.ca will also offer viewers behind-the-scenes glimpses of this season’s challenges, culinary creations, triumphs, and upsets. Seasons 2 and 3 of MASTERCHEF CANADA are currently streaming on CraveTV™, and in encore broadcasts on Gusto. The MASTERCHEF format and finished programmes are represented internationally by Endemol Shine Group, and is based on a format originally created by Franc Roddam.  MASTERCHEF CANADA is produced by Proper Television in association with CTV. Proper’s Vice-President and Creative Director Cathie James is the show runner and executive producer; Marike Emery is the Series Producer; President of Proper Television, Guy O’Sullivan, is the executive producer. For Bell Media, Danielle Pearson is Manager, Original Programming, Factual and Reality; Robin Johnston is Director, Original Programming, Factual and Reality; Corrie Coe is Senior Vice-President, Original Programming. Pat DiVittorio is Vice-President, CTV and Specialty Programming; Mike Cosentino is Senior Vice-President, Content and Programming. Randy Lennox is President, Bell Media.