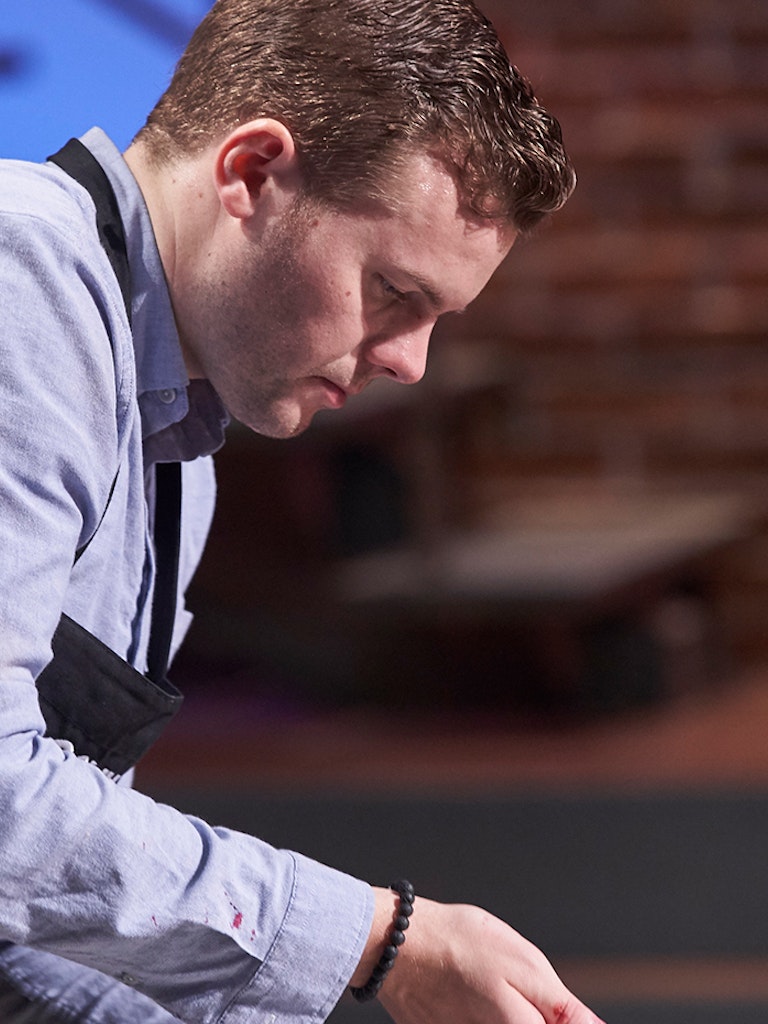 – St. John’s, N.L.’s Colin Buckingham becomes the third home cook eliminated from the MASTERCHEF CANADA competition in Season 6 –
– On the next episode of MASTERCHEF CANADA, the remaining nine home cooks get a special surprise when the Mystery Box presents a blast from the past –

TORONTO (April 15, 2019) – Following the first off-site Team Challenge of the season, MASTERCHEF CANADA judges Michael Bonacini, Claudio Aprile, and Alvin Leung revealed that Colin Buckingham, a car salesman from St. John’s, N.L., would be the third home cook to leave their white apron behind in the MASTERCHEF CANADA Kitchen. With nine home cooks now remaining in the competition, MASTERCHEF CANADA returns next week on Monday, April 22 at 9 p.m. ET/PT on CTV, CTV.ca, and the CTV app.

On tonight’s episode of MASTERCHEF CANADA, the home cooks prepared a meal for the wedding reception of a bride and groom during their first off-site Team Challenge. The teams were given only three hours to make and plate their Caribbean-inspired dishes for 121 guests. As the cook began, Captain Tony showed stress under pressure, yelling at his teammates in frustration. By contrast, Chanelle’s team remained composed as they plated their appetizers, but panic ensued when they ran out of their soup with 20 plates still to go. After dinner, the newlywed couple and their guests voted on their favourite menu, with Tony’s red team narrowly taking the win.

Back in the MASTERCHEF CANADA Kitchen and safe from elimination, the Red Team retreated to the safety of the balcony to watch the Blue Team compete in a Pressure Test where they were tasked with creating two elevated cheesecakes  with both a sweet and savoury version. During the tasting, Chef Michael dubbed Jennifer’s savoury everything bagel cheesecake concept “ingenious,” and they were chosen as the winner. Chef Alvin called Colin’s savoury cheesecake attempt “a wreck,” as the flavour combinations of lemon cheesecake with scallop ceviche and tomato salsa did not blend together nicely. Colin was ultimately sent home, and the remaining Top 9 home cooks move forward in the competition.

In the next all-new episode of MASTERCHEF CANADA, “Tastes Like Teen Spirit” (Monday, April 22 at 9 p.m. ET/PT on CTV, CTV.ca, and the CTV app), the remaining home cooks are taken back in time in a Mystery Box Challenge to create something that would have enticed  their former teenage selves. A special guest appearance from MASTERCHEF CANADA’s most famous teen, Season 5 winner Beccy Stables, inspires the chefs to elevate youthful classics. The winner is safe from competing in an extra-spicy Elimination Challenge that will end at least one home cook’s journey.

The remaining Top 9 home cooks vying for the title of MASTERCHEF CANADA and the $100,000 cash prize are: