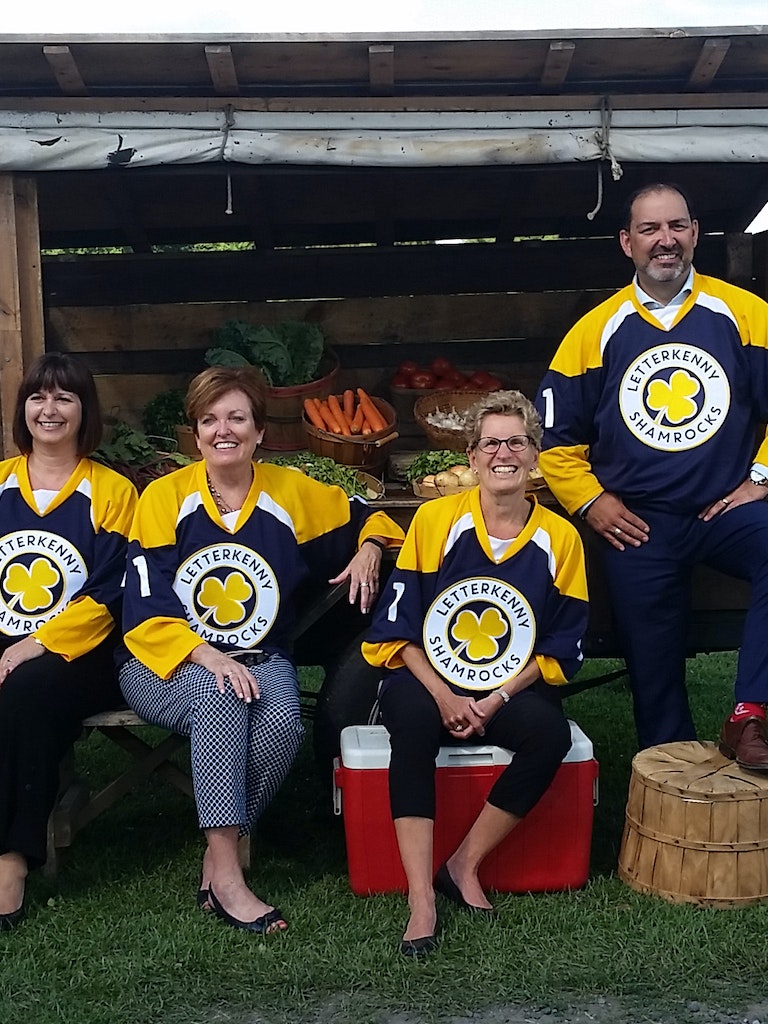 TORONTO (August 8, 2016) – As announced on Saturday during Northern Ontario Heritage Fund Corporation’s event highlighting the year’s successful productions in Sudbury, CraveTV confirms that it has ordered a third season of LETTERKENNY. Season 1 has been battin’ a hundy p, so CraveTV’s keepin ‘er goin’ with another six-pack slated to begin production in 2017. This toe-curling announcement comes just weeks after production wrapped on Season 2, which is set to premiere on CraveTV later this year. The half-hour, small-town comedy is produced by New Metric Media in partnership with DHX Media, and shoots on location in and around Sudbury, ON. Season 1 is currently streaming on CraveTV. “Canadian comedy has always had a unique voice but LETTERKENNY stands apart,” said Corrie Coe, Senior Vice-President, Independent Production, Bell Media. “We’re excited to continue working with Jared, Jacob, the exceptionally talented cast, our tireless production partners New Metric Media, and of course the city of Sudbury, as LETTERKENNY heads back to the farm.” “LETTERKENNY continues to be a leading performer in the CraveTV lineup, and so as we finalize Season 2 launch plans, we are delivering a Season 3 pick-up now to capitalize on the incredible momentum oozing from this amazing production team,” said Mike Cosentino, Senior Vice-President, CTV and Specialty. “LETTERKENNY is a distinctive and authentic, proudly original program that not only drives views, but also subscriber acquisition, making today’s announcement a great day for comedy fans everywhere,” said Tracey Pearce, President, Distribution and Pay, Bell Media. Season 1 of LETTERKENNY had the biggest debut of any series on CraveTV since the premium TV streaming service launched in 2014, with more CraveTV users watching LETTERKENNY than any other series or title on CraveTV. LETTERKENNY is based on the Internet sensation Letterkenny Problems, a series of shorts which have raked in more than 18 million views. Created and co-written by Jared Keeso of Bravo’s hit Canadian Screen Award-nominated original drama 19-2, LETTERKENNY is executive produced, directed, and co-written by Jacob Tierney (The Trotsky), who returns for Season 2. With just one season unveiled on CraveTV, LETTERKENNY has already garnered Texas-sized acclaim from critics and celebrities and inspired fan-generated videos, and memes. Below are just a few samples of fan praise, among them, mega-stars Jay Baruchel and Kevin Smith. ! @LetterkennyProb is the funniest TV show that I'm not the lead of! @BaruchelNDG “You cross-fit?" "Well you can cross-f@ck off." #LetterKenny is my new favorite anything ever. F@ck it's hysterical!” @ThatKevinSmith Fan-generated recreations: https://www.youtube.com/watch?v=4iGbla24h-I On super soft birthdays:

LETTERKENNY revolves around the dustups Wayne (Keeso) and his buds get into with their small-town Ontario rivals. There’s The Hicks, the Skids, and the Hockey Players, who get at each other about the most mundane things, often ending with someone getting their ass kicked.  LETTERKENNY is produced by New Metric Media (What Would Sal Do?), in partnership with DHX Media in association with Bell Media, with the participation of Canadian Media Fund, OMDC Tax Credits and the Canadian Film or Video Production Tax Credit and the Northern Ontario Heritage Fund. Jacob Tierney (The Trotsky) is executive producer, director, and co-writer. Patrick O’Sullivan and Mark Montefiore (Cas & Dylan) are executive producers for New Metric Media. Sarah Fowlie is Director, Independent Production, Comedy, Bell Media. Executive for Bell Media is Bill Lundy. Corrie Coe is Senior Vice-President, Independent Production, Bell Media. Tracey Pearce is President, Distribution and Pay, Bell Media. Randy Lennox is President, Broadcasting and Content, Bell Media.

About New Metric Media
New Metric Media is a film, television, and new media production company that works with top creative talent to produce outstanding film, television, and new media content to entertain the world over. New Metric Media’s past and present projects include the upcoming series WHAT WOULD SAL DO? and the feature film Cas & Dylan, directed by Jason Priestley and starring Academy Award®-winner Richard Dreyfuss and Golden Globe®-nominee Tatiana Maslany. For more information visit www.newmetricmedia.com.

Rise and Shine, Canada! CTV Announces YOUR MORNING Premiere We...