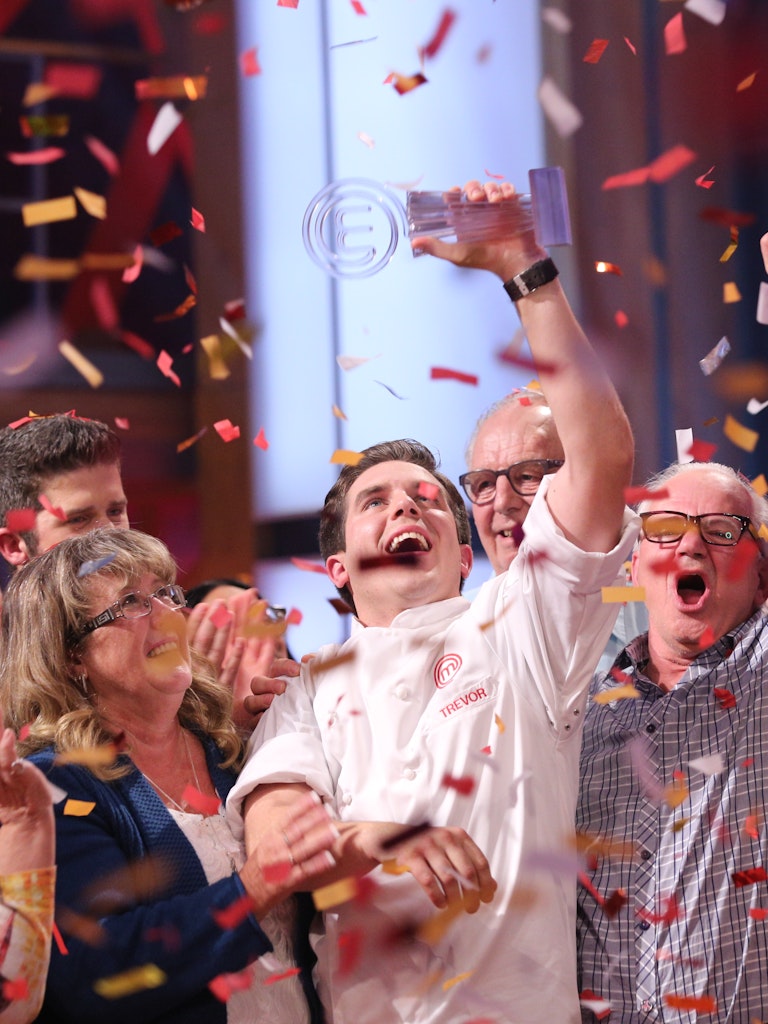 TORONTO (June 2, 2017) – Following an intense 12-episode culinary battle that began with a box of rice and 24 ambitious home cooks, it was revealed tonight by judges Michael Bonacini, Alvin Leung, and Claudio Aprile that plumber/gas fitter Trevor Connie (@ConnieTrevor) from Edmonton, Alta., is the winner of MASTERCHEF CANADA Season 4. Cooking his way through a demanding, uninterrupted three-hour, three course culinary showdown, Trevor was awarded the much sought-after title of MASTERCHEF CANADA and the $100,000 grand prize over runner up Thea VanHerwaarden (@Thea_van1), a broker from Vancouver, B.C. “This experience has changed my life is so many ways and for that I am incredibly grateful," said Trevor Connie. “I’m so honoured to have earned the title of Canada’s MasterChef. This journey has been truly humbling, and has given me the confidence and vision to pursue my food dream. I’m so thankful for the opportunity I’ve had to meet and learn from so many talented people, from my fellow home cooks, the judges, and everyone I’ve encountered during this adventure; and to my amazing family and friends who have cheered me on along the way.” On the Season 4 finale, the final two home cooks faced off in the most spectacular culinary showdown in MASTERCHEF CANADA history. With only three uninterrupted hours, Trevor and Thea had to prepare a three-course, restaurant quality meal that demonstrated their talent and growth throughout the competition. Starting with one hour to complete the appetizer course, Trevor created an octopus and chips appetizer with a deconstructed lemon tartar sauce, while Thea presented Mexican street corn panna cotta, with zucchini blossoms and jalapeno-lime puree. Judges Michael Bonacini, Alvin Leung, and Claudio Aprile enjoyed the flavours and presentation of Trevor’s dish and thought the octopus was cooked to perfection and felt Thea’s dish perfectly captured Latin American cuisine. With the clock continuously counting down, the home cooks moved on to prepare their entrees. Trevor presented the judges with a braised lamb shank and lamb tongue with celeriac puree and seasonal vegetables, while Thea prepared braised pork belly and pork cheek tamale with pineapple mole sauce The judges declared that Trevor’s flavours and plating were almost perfect and felt that Thea’s dish showcased her command of bold flavours, but found the tamale ball to be slightly raw in the middle. In the final round of the showdown, Thea and Trevor prepared and presented their complex desserts. Thea created a stunning café de olla-inspired offering with orange cake, sponge toffee, and cinnamon ice cream, while Trevor served up a unique and whimsical take on a fallen ice cream cone with mint chocolate gelato and a crème fraiche whip. The judges found Trevor’s desert playful and full of flavour, while Thea’s creation was beautifully plated and full of bold flavours. Following a difficult deliberation, judges Michael Bonacini, Alvin Leung, and Claudio Aprile revealed that Trevor would receive the title of Canada’s next MasterChef. Season 4 of MASTERCHEF CANADA is the #1 Canadian program this spring with total viewers and all key adult demos. Averaging 1.3 million total viewers weekly, MASTERCHEF CANADA ranks in the Top 10 most-watched programs this spring with all key adult demos and consistently wins its Thursdays at 9 p.m. timeslot. Viewers can relive all the culinary action from the MASTERCHEF CANADA Kitchen with Season 4 episodes available on demand at CTV.ca and on the CTV GO app. Season 4 will also be available on CraveTV with episodes streaming beginning Friday, June 2. The Season 4 finale will encore Saturday, June 3 at 7 p.m. ET/PT on CTV Two; Sunday, June 4 at 1 p.m. ET on CTV and 7 p.m. ET on Gusto (check local listings). Viewers can watch Trevor Connie live on YOUR MORNING (Weekdays at 6 a.m. ET on CTV in Ontario, Québec, and Eastern Canada), CTV MORNING LIVE EDMONTON (Weekdays at 5:30 a.m. MT on CTV Edmonton) CP24 BREAKFAST (Weekdays at 5:30 a.m. ET), CTV News Channel (8:45 a.m. ET/PT), and THE SOCIAL (Weekdays at 1 p.m. ET/PT on CTV) on Friday, June 2, and ETALK (Weekdays at 7 p.m. ET/PT on CTV) on Monday, June 5 as he discusses his experience on MASTERCHEF CANADA. The MASTERCHEF format and finished programmes are represented internationally by Endemol Shine Group, and is based on a format originally created by Franc Roddam. MASTERCHEF CANADA is produced by Proper Television in association with CTV. Proper’s Vice-President and Creative Director Cathie James is the show runner and executive producer; Marike Emery is the Series Producer; President of Proper Television, Guy O’Sullivan, is the executive producer. For Bell Media, Danielle Pearson is Manager, Original Programming, Factual and Reality; Robin Johnston is Director, Original Programming, Factual and Reality; Corrie Coe is Senior Vice-President, Original Programming. Pat DiVittorio is Vice-President, CTV and Specialty Programming; Mike Cosentino is Senior Vice-President, Content and Programming. Randy Lennox is President, Bell Media.