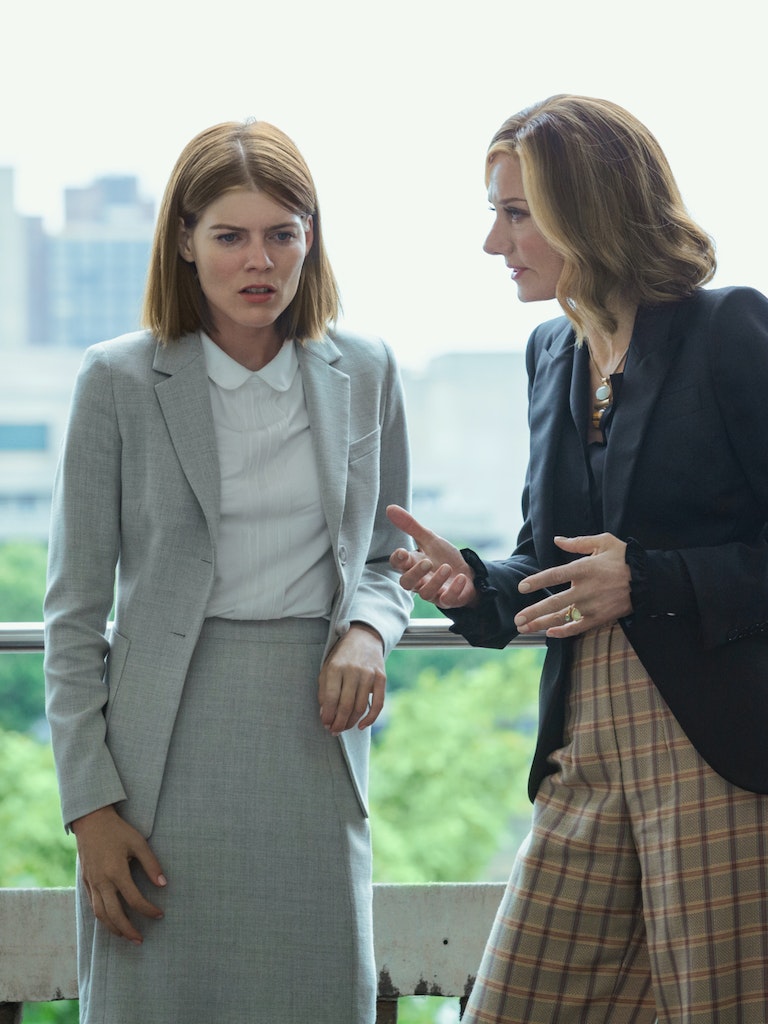 There are life-and-death choices to be made in the heartstopping season finale of  THE ROOK, airing Sunday at 8 p.m. ET, exclusively on STARZ in Canada.

Myfanwy Thomas, played by Emma Greenwell, and Linda Farrier, played by Joely Richardson, quickly discover how dangerous life is outside of the Checquy. Eventually, Myfanwy is forced to choose between her freedom and Farrier’s life. Tough call!

But the main characters in THE ROOK have been faced with tough calls all season. And most of those tough calls can be boiled down to one word: Trust. How do human beings decide who to trust, or what to trust, in extreme circumstances?

“We've been paranoid of everything since filming, including each other,” Greenwell said with a laugh, during a visit to Bell Media headquarters in Toronto with Richardson to promote THE ROOK. “For Myfanwy's journey especially, I've always thought it was about coming to terms with who you are, trusting your instinct, and going on that, and everything else is white noise.”

But how do you know? THE ROOK has been filled with instances where characters want to trust their instinct, but their instinct is sending mixed messages.

“When you don't know what your gut is telling you, they always say, don't do anything,” Richardson said. “But yes, the whole premise of our story is, how do you find yourself, and find the people you can trust? Very few people are looking out for the whole, and it seems more about individual ambition. I think my character, Farrier, she's looking out for what's in everyone's best interest, and it's not a popular position to be in. She's not after personal gain. I don't think Myfanwy is after personal gain either, apart from the desire to gain herself.”

Greenwell added, “When you start out, you listen to your parents, you listen to your teachers, you listen to all these outside sources, and as you develop your own likes and dislikes, you start to make decisions based more on yourself. But experience plays a big part in that. When you’re younger, you find yourself in situations that you would never put yourself in again, because you learn from mistakes. But Myfanwy didn't have any of those mistakes to learn from, because she couldn’t remember.”

The characters in THE ROOK have reached the point now where countless factors are influencing their decision-making, be it split-second choices or otherwise.

“Sometimes we can make bad decisions because we're making them, say, from our damaged place, or our panicked place,” Richardson said. “I remember once I was in a real quandary - it was a job thing, so not a big life choice, but not superficial, either - and I couldn't decide. Someone said to me, ‘Whatever you do, make a decision out of love, not fear.’ And I thought, that's a really good guideline, Make a decision without all the voices in your head saying, ‘Isn't that a bad thing?’ Do you love it? Or … do you love yourself enough to be able to say, ‘This isn't a good place for me right now, I don't want to be there.’ Just make a decision from love.”

But will Myfanwy make decisions based on love, not fear, in the season finale of THE ROOK? Find out Sunday.

Canadians can catch up on the entire season of THE ROOK on STARZ. In Canada, STARZ is available through most television service providers, directly to consumers as an add-on to Crave, and through Amazon Channels.