– TSN’s Senior Vice-President of Production to be honoured in Toronto on Saturday, Oct. 1 during Ryerson University’s Alumni Weekend celebration –

TORONTO (September 30, 2016) – Canada’s Sports Leader congratulates Mark Milliere, TSN’s Senior Vice-President of Production, on being inducted into Ryerson University’s Radio & Television Arts (RTA) Wall of Fame. Selected as one of seven new inductees by the RTA Alumni Association, Milliere will be formally inducted tomorrow (Saturday, Oct. 1) during Ryerson University’s Alumni Weekend celebration in Toronto. “Mark has been an essential part of building TSN into Canada’s Sports Leader, and he continues to shape the future of our network,” said Stewart Johnston, President of TSN. “On behalf of the entire TSN team, I congratulate Mark on this tremendously well-deserved honour.” 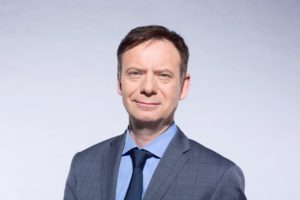 Milliere has spent his entire career at TSN, joining the network three years after its inception in 1984. As one of TSN’s pioneers, Milliere has been instrumental in building TSN into one of North America’s most influential sports brands. Milliere’s leadership has been a driving force behind TSN’s award-winning productions, including TSN Hockey, CFL ON TSN, and the World Juniors, which he helped elevate into Canada’s favourite holiday tradition and an annual TSN ratings bonanza. Known for his ability to identify and develop broadcast talent, the multiple Canadian Screen  Award winner has also shaped SPORTSCENTRE into daily appointment viewing, introducing many innovations and firsts along the way, including the popular Top 10 segment, and the industry’s first all-female anchor team. Milliere joined TSN in 1987 as an Editorial Assistant at SPORTSCENTRE (then called SportsDesk) while still a Ryerson RTA student. He was soon promoted to Story Editor (1988), Associate Producer (1990), Producer (1992), Senior Producer (1998), Executive Producer (2000), Vice-President (2007), and Senior Vice-President (2011). Outside of the office, the Georgetown, Ont. native is actively involved in multiple industry-related organizations. He sits on the Ryerson RTA School of Media Advisory Council, the selection committee for George Brown College’s 5 to Watch: Canada’s Sports Business Awards, and serves as the Chair of the Special Olympics Gala Committee. Milliere is also a special guest instructor at Ryerson’s Sport Media Program.