TORONTO (August 31, 2015) – The TSN family mourns the passing of Graham Leggat, an iconic Canadian soccer commentator and host of several of the network’s popular soccer shows, including SOCCER SATURDAY and WORLD OF SOCCER. 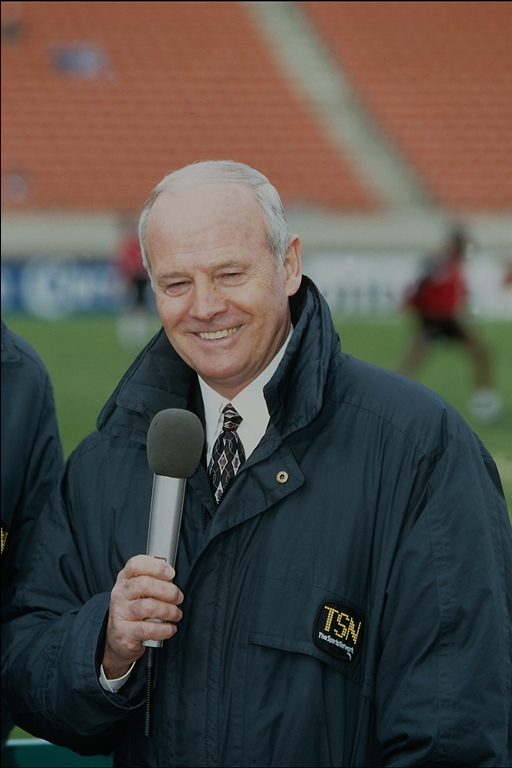 “With his distinct voice and Scottish charm, Graham set the standard for soccer broadcasting in Canada, helping to raise a new generation of Canadian soccer fans,” said Stewart Johnston, President of TSN. “A true gentleman, Graham brought passion, integrity, and dedication to his craft. We extend our heartfelt condolences to Graham’s family and friends. His lasting impact upon soccer in Canada will always be remembered.” With a career spanning nearly 30 years, Leggat joined TSN in 1986. He was the long-time face of the network’s soccer coverage alongside Vic Rauter, providing expert analysis on the FIFA World Cup, UEFA Euro, Canadian Soccer League, and more. "It was a great honour to travel the country alongside Graham 20 weeks a year for six years of the Canadian Soccer League," said TSN’s Vic Rauter. "Graham loved the game, the people who played it, and those who watched it. After all those years, he always said there was nothing like the smell of the freshly cut pitch prior to stepping on the field. To him, it was truly the beautiful game. He was loved and will be missed." Biography Graham Leggat, a former Scottish International player, joined TSN in 1986 as host of TSN's SOCCER NEWS and EUROPEAN REPORT. He also hosted TSN's WORLD OF SOCCER, a weekly program featuring games and news from the premier leagues around the world, and SOCCER SATURDAY. Leggat was a key ingredient in TSN's coverage of the 1998 FIFA World Cup and UEFA Euro 2000, providing in-depth analysis throughout the tournaments. Prior to joining TSN, Leggat was a television soccer commentator from 1974 to 1986 and covered five FIFA World Cups (1974 in Munich, 1982 in Spain, 1986 in Mexico, 1990 in Italy, and 1994 in the USA), as well as two Olympic Games (1976 in Montreal and 1984 in Los Angeles). The native of Aberdeen, Scotland also served as expert analyst for TSN's live coverage of the North American Soccer League (NASL) playoffs and championship game in October 1984. Leggat was named the first coach of the Toronto Metros in the NASL when he came to Canada in 1971. He also served as Vice-President and Managing Director of the NASL's Edmonton Drillers for two years (1979-80). A devoted champion of the sport, Leggat was inducted to the Canadian Soccer Hall of Fame in 2001 under the Builder Category. Leggat's 16-year soccer career included stints with Aberdeen in the Scottish Premier Division and well as several clubs in the English League during the 1950’s, including Fulham, Birmingham City and Rotherdam United. He also played in 18 international games for Scotland, including the 1958 World Cup in Sweden.