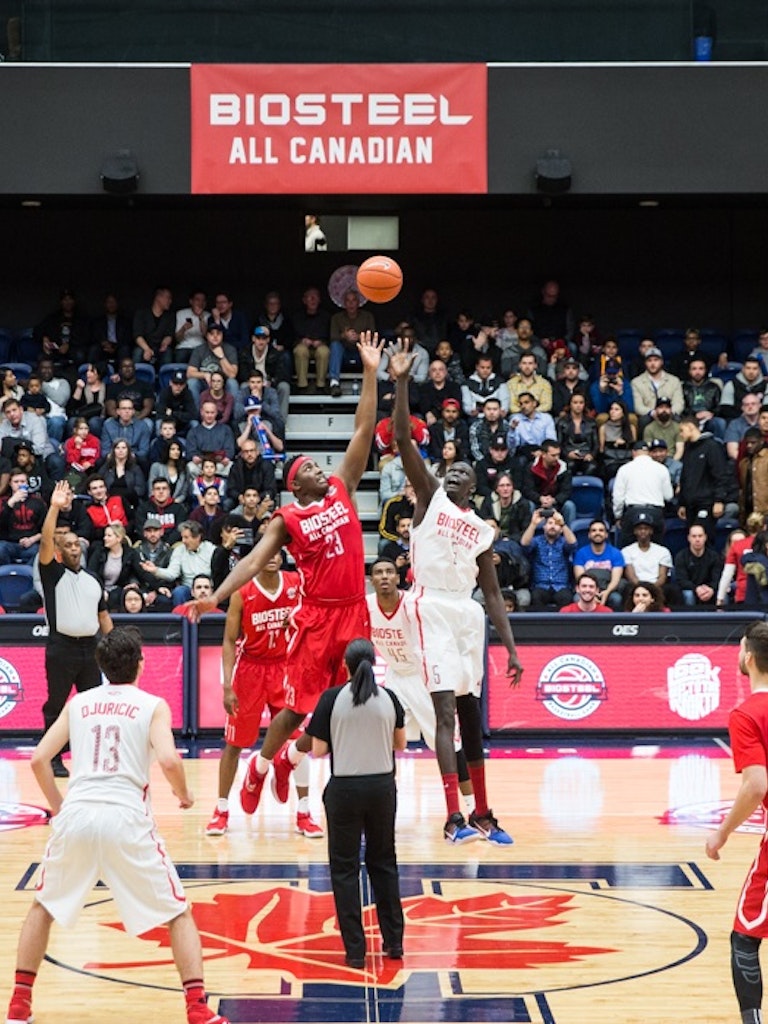 TORONTO (March 13, 2017) – Basketball’s future champions live on TSN, as BioSteel, Pretty River Sports + Entertainment, and TSN today revealed the roster of players selected to participate in the third annual edition of the BIOSTEEL ALL-CANADIAN BASKETBALL GAME. Announced during tonight’s NBA ON TSN halftime show as the Toronto Raptors host the Dallas Mavericks live on TSN, the players selected to the roster will be featured in TSN’s live coverage of the BIOSTEEL ALL-CANADIAN BASKETBALL GAME on Monday, April 10 at 7:30 p.m. ET exclusively on TSN, live from the University of Toronto’s Goldring Centre for High Performance Sport. The roster for the 2017 BIOSTEEL ALL-CANADIAN BASKETBALL GAME features 24 of the top high school basketball players from across the country. The 24 players on the roster are as follows: Junior Farquhar of Côte-St-Luc, Que. was selected to appear in the game but is currently unable to participate due to injury. Shai Alexander of Hamilton, Ont., Lindell Wigginton of North Preston, N.S., and RJ Barrett of Mississauga, Ont. were selected to appear in the game but are unable to participate due to schedule conflicts or academic obligations. All of the athletes selected to the roster of the BIOSTEEL ALL CANADIAN BASKETBALL GAME have played prominent roles in top-level basketball programming, from AAU to representing Canada on the international stage.

<<NOTE TO MEDIA: For accreditation to the BIOSTEEL ALL CANADIAN BASKETBALL GAME on Monday, April 10, please fill out attached form and send to Rob Duffy rob.duffy@bellmedia.ca>>

The 24 players were chosen by a 10-person selection committee comprised of a cross-section of Canadian basketball stakeholders including provincial and territorial representatives, clubs, coaches, and scouts from across the country (more information regarding the selection process is available through the game’s official website at BioSteelAllCanadian.com). A selection of players featured on the roster will also compete in the skills events surrounding the game, which include the Sport Chek 3-Point Shootout and BMO Slam Dunk Competition, which take place at the Athlete Institute in Orangeville, Ont., on Sunday, April 9. Additional details, including the roster for the BioSteel Futures All Canadian Game, which takes place as part of the same event, will be announced in the coming weeks.

BioSteel is a Canadian operated sports nutrition company that was built on the mandate of providing the safest, healthiest, and most effective line of nutritional products available. BioSteel’s line of nutritional products ranges from a sugar and caffeine free sports beverage with no artificial flavours, colours, or preservatives, to a line of proteins and a variety of nutritional bars. BioSteel products are currently readily available across Canada, and globally with select retail partners. For more information, including a full list of retail locations, please visit www.biosteel.com or email info@biosteel.com.