– From the makers of Discovery’s PLUTO: FIRST ENCOUNTER, the gripping one-hour special explores the harshest planet in the solar system, revealing the high stakes and challenges of the Juno Spacecraft mission –
– JUPITER: CLOSE ENCOUNTER to air across Discovery International Networks in dozens of countries around the world –

“No other planet can reveal as much information as Jupiter about our own origins. If they make it, a five-billion-year-old treasure chest will be opened.” – Dr. Dan Riskin, Anchor, JUPITER: CLOSE ENCOUNTER and co-host of DAILY PLANET on Discovery “We want to know where we came from. Earth. Life! And Jupiter holds those secrets.” – Dr. Scott Bolton, Principal Investigator Juno Mission, NASA 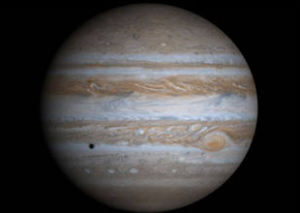 TORONTO (June 21, 2016) – Can Jupiter unlock the secrets of Earth’s formation? How did a team engineer a spacecraft to endure a toxic mix of radiation and gaseous turbulence? After a five-year journey, the moment of truth is finally here. On Tuesday, July 5 at 7 p.m. ET/4 p.m. PT, the original Discovery Canada production JUPITER: CLOSE ENCOUNTER delivers a comprehensive, hour-long look at the unprecedented, amazing, and utterly extreme journey of NASA’s heavily armoured Juno Spacecraft on an odyssey to the largest planet in the solar system. Anchored by DAILY PLANET Co-Host Dr. Dan Riskin from the NASA Jet Propulsion Laboratory (JPL) in Pasadena, California, JUPITER: CLOSE ENCOUNTER follows NASA’s Juno Spacecraft mission as it attempts to enter a “polar orbit” around the king of the the solar system for the first time ever on July 4. The landmark mission will study the planet’s spectacular auroras, seek the inner-most core, and wade into Jupiter’s Great Red Spot. The gripping one-hour special introduces viewers to the dedicated and incredible team behind the high stakes-mission – scientists determined to provide new answers to the mystery of the solar system, Earth, and life itself. **Media Note** Photography for JUPITER: CLOSE ENCOUNTER available online at BellMediaPR. JUPITER: CLOSE ENCOUNTER is produced by Discovery’s Exlporation Production Inc. (EPI),  the same team that brought viewers 2015’s PLUTO: FIRST ENCOUNTER, which reached 1.4 million total viewers when it premiered July 15, 2015. Following its world premiere in Canada, JUPITER: CLOSE ENCOUNTER will air around the world on Discovery International networks, including Eastern, Central, and Western Europe, the U.K., Scandinavia, the Middle-East and Africa, China, India, South and Central Asia, Australia, South America, and the U.S. Bringing viewers to the heart of the action, JUPITER: CLOSE ENCOUNTER offers unprecedented access to the NASA mission lead by Principal Investigator Dr. Scott Bolton as the team overcomes incredible challenges as the Juno spacecraft reaches its destination. Discovery’s JUPITER: CLOSE ENCOUNTER promises to capture the drama and tension as scientists and engineers strain to detect the faint signals that will reveal the success – or failure – of their mission. Juno Mission Facts and Figures: More information on the Juno mission is available at: http://www.nasa.gov/juno Source: Numeris

Discovery Canada’s in-house production company, Exploration Production Inc. (EPI), is a multi-award-winning producer of ambitious, original, entertaining factual documentaries and series, for both Discovery and other international broadcasters. By the end of 2016, EPI will have delivered more than 3000 hours of television programming in the form of a daily science magazine show, series, and specials. EPI programming has been broadcast in more than 150 countries, in two-dozen languages, to potential viewing audiences of more than 600 million conventional, cable and satellite subscribers. EPI is a wholly-owned subsidiary of Discovery Canada, a joint-venture between Bell Media (Canada) and Discovery Communications Inc. Visit Exploration.ca for more information.

Season 4 of Comedy Series MARON Premieres June 26 on The Movie...

Leading Canadian Brands Sign On for CFL ON TSN’s Complete and ...