TORONTO (January 26, 2016) – For two years, military conflict has raged in Eastern Ukraine, killing approximately 8,000 soldiers and wounding some 17,000 more on both sides of the struggle. Premiering this Saturday, Jan. 30 at 7 p.m. ET/PT on CTV, CTV GO, and CTVNews.ca, W5, Canada’s #1 investigative documentary series, delivers an emotional and uplifting look at a group of volunteer Canadian doctors on a unique medical mission. 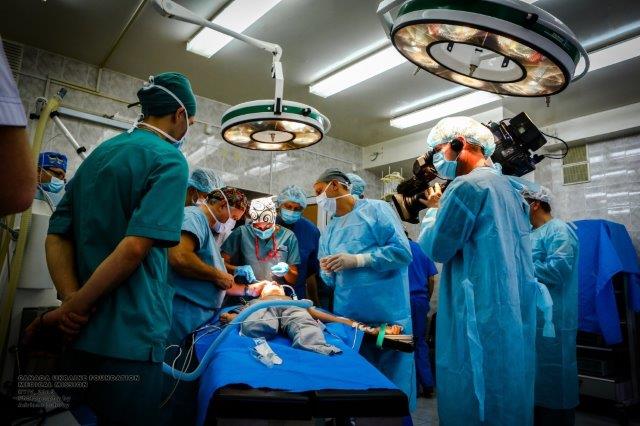 W5 documents Canadian medical team on unique medical mission at Ukraine Military Hospital (Photo by Adriana Luhovy). As the medical teams work tirelessly to save and improve the lives of wounded Ukrainian soldiers, W5 embarks on a rare, week-long mission behind the walls of the Ukraine Military Hospital, with a candid look at the care provided to soldiers wounded in the ongoing conflict  with Russian-backed separatists. During the visit, W5 also documents the treatment of one unexpected patient: a young civilian and triple amputee who arrives at the military hospital while cameras are rolling. Toronto surgeon Dr. Oleh Antonyshyn, a proud Canadian of Ukrainian heritage, leads a group of Canadian volunteers at a military hospital in Kiev. Accompanied by 22 of his colleagues – surgeons, anesthesiologists, nurses, and one occupational therapist – Dr. Antonyshyn treats soldiers wounded in the conflict. W5 captures compelling footage of Dr. Antonyshyn and his team as they examine 90 often severely injured patients, performing operations on half of those examined. Every operation is attended by Ukrainian doctors, nurses, and interns, all hoping to learn the latest medical techniques from their Canadian counterparts. Of the many soldiers examined by Dr. Antonyshyn's team, few are more obviously in need of surgery than 24-year-old Rodeon Tristan. Shot in the head by a sniper on June 17, 2015, Rodeon was kept alive by medics at the scene but his right eye and much of the right side of his face were damaged. W5 follows the medical team as  they develop a plan of treatment. Another patient in desperate need of medical attention from the Canadian team is 11-year-old Mykola Nyzhnakivsky – the first child ever to receive treatment at the military hospital. Mykola was nearly killed when a grenade he and his friends found near his family home exploded, severely injuring him and killing his younger brother. The blast left him a triple amputee with part of his skull missing and shrapnel embedded in his face. Seeing such tragedy, Dr. Antonyshyn and his team, along with a group of doctors back home in Montréal, pledge to do all they can to help Mykola return to a normal life. W5 also airs Saturdays at 10 p.m. ET and Sundays at 1 p.m. ET on CTV, at 5 p.m. ET on CTV Two, and at 7 p.m. ET on CTV News Channel. W5 can also be seen on Investigation Discovery on Tuesdays at 11 p.m. ET, and Wednesdays at 12 noon ET; on demand at CTVNews.ca/W5, on the CTV NEWS GO app, the CTV Mobile channel on Bell Mobile TV, and through video on demand partners, such as Bell Fibe TV (visit CTV.ca for local listings).

With an ongoing commitment to covering tough, relevant stories with fair and responsible reporting, W5 is in its 50th season of investigative journalism. Hosted by CTV NEWS’ Lloyd Robertson, W5 is the most-watched documentary program in Canada, and the winner of several awards including the prestigious Gordon Sinclair Award for Broadcast Journalism. Anton Koschany is Executive Producer of W5. Brett Mitchell is Senior Producer. Wendy Freeman is President, CTV News.

About CTV CTV is Canada’s #1 private broadcaster. Featuring a wide range of quality news, sports, information, and entertainment programming, CTV has been Canada’s most-watched television network for the past 14 years in a row. CTV is a division of Bell Media, Canada’s premier multimedia company with leading assets in television, radio, digital, and Out-of-Home. Bell Media is owned by BCE Inc. (TSX, NYSE: BCE), Canada’s largest communications company. More information about CTV can be found on the network’s website at CTV.ca.

Yesterday’s Brady vs. Manning Showdown on CTV and RDS Becomes ...