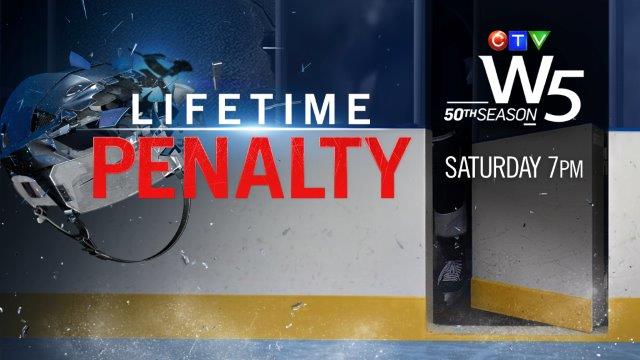 TORONTO (February 11, 2016) – This week, W5 investigates the biggest battle in pro hockey: a legal showdown between the National Hockey League and more than 100 of its former players suffering the long-term effects of multiple concussions. TSN Senior Correspondent Correspondent Rick Westhead, on special assignment for W5, leads the all-new episode  LIFETIME PENALTY, premiering Saturday, Feb. 13 at 7 p.m. ET/PT on CTV, CTV GO, and CTVNews.ca. WATCH: Click here to watch the trailer for TSN and W5’s LIFETIME PENALTY. In LIFETIME PENALTY, Westhead introduces viewers to two former NHL players who share how their lives have fallen apart after they left the league. Mike Peluso and Dan Lacouture say they have been abandoned and feel isolated in retirement, and claim they have become different people as a result of the head injuries they sustained while playing in the league. Both Peluso and Lacouture share how their changed personalities, after multiple concussions, have affected their families and themselves. <<NOTE TO MEDIA: TSN Senior Correspondent Rick Westhead is available for interviews. Please email patricia.garcia@bellmedia.ca>> The class-action lawsuit against the NHL was filed two years ago, and is moving through U.S. federal court in Minnesota. Though a trial is still many months away, documents filed give unique insight into how NHL executives have handled the league’s concussion crisis. The players charge that the NHL put profits ahead of their safety and that league executives knew or ought to have known about the long-term dangers players faced when returning to the ice after multiple head injuries and concussions. Westhead also interviews prominent NHL player agent Allan Walsh, who explains what his own clients have shared with him about their experiences with NHL team doctors and league officials. Dr. Charles Tator, a leader in understanding how multiple concussions affect players, is also featured in this special documentary feature. Saturday’s W5 broadcast also features Sandie Rinaldo’s exclusive portrait of Canadian Mitch Garber, Caesars Acquisition Company CEO and Chairman of Cirque du Soleil, who controls four hotels and casinos in Las Vegas, and one of the biggest social and mobile game companies in the world. Viewers are introduced to THE RINGMASTER, a philanthropist active in supporting hospitals, schools, and a broad array of charities. From his modest Montréal roots to overseeing a leading entertainment and gaming empire, W5 provides an intimate glimpse at an influential man few Canadians have ever heard of – until now. In addition to airing Saturdays at 7 p.m. ET/PT on CTV, W5 also airs Saturdays at 10 p.m. ET and Sundays at 5 p.m. ET on CTV Two, at 1 p.m. ET Sundays on CTV, and at 7 p.m. ET on CTV News Channel. W5 can also be seen on Investigation Discovery on Tuesdays at 11 p.m. ET, and Wednesdays at 12 noon ET; on demand at CTVNews.ca/W5, on the CTV NEWS GO app, the CTV Mobile channel on Bell Mobile TV, and through video on demand partners, such as Bell Fibe TV (visit CTV.ca for local listings).

With an ongoing commitment to covering tough, relevant stories with fair and responsible reporting, W5 is in its 50th season of investigative journalism. Hosted by CTV NEWS’ Lloyd Robertson, W5 is the most-watched documentary program in Canada, and the winner of several awards including the prestigious Gordon Sinclair Award for Broadcast Journalism. Anton Koschany is Executive Producer of W5. Brett Mitchell is Senior Producer. Wendy Freeman is President, CTV News.

About CTV CTV is Canada’s #1 private broadcaster. Featuring a wide range of quality news, sports, information, and entertainment programming, CTV has been Canada’s most-watched television network for the past 14 years in a row. CTV is a division of Bell Media, Canada’s premier multimedia company with leading assets in television, radio, digital, and Out-of-Home. Bell Media is owned by BCE Inc. (TSX, NYSE: BCE), Canada’s largest communications company. More information about CTV can be found on the network’s website at CTV.ca.

MTV and U by Kotex® Team Up to “Save The Undies”